The challenge of including affordable homes in bigger developments in Brighton and Hove has been laid bare in a planning inspector’s ruling.

The independent inspector said that plans to turn the empty Lansdowne Place Hotel – formerly the Dudley Hotel – into 45 flats did not need to include any affordable homes.

She agreed that the scheme, at the seafront end of Lansdowne Place, Hove, could include 18 homes for shared ownership although none would be for rent as the council had hoped.

But she accepted that the management and maintenance charges could put the flats financially out of reach of those who they were meant to help.

She said: “The service charges may prove to be an unaffordable barrier for prospective purchasers.”

So she said that the developer could pay Brighton and Hove City Council a “commuted” sum of £2.4 million so that the council could provide affordable homes elsewhere.

The case echoes the recent application by housebuilder Crest Nicholson to pay the council a commuted sum of £1.2 million rather than include eight affordable flats in a scheme in Davigdor Road, Hove.

And it plays to concerns that developers are making promises in keeping with the council’s policies so that they win planning permission before going back on their word. 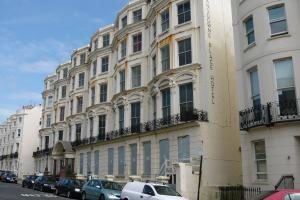 The derelict Lansdowne Place Hotel, previously known as the Dudley Hotel, in Hove

The Lansdowne Place Hotel appeal highlighted issues around the financial viability of such schemes, the cost of homes in the area and the consequences of the collapse of the hotel business.

The appeal decision was published just before the latest report from the administrators which suggests that few people – if any – will be paid what they are owed, including 17 brides.

Even Alliance and Leicester is likely to be out of pocket. As a preferential creditor with a fixed charge of almost £7 million, it may well recoup most of its money but will almost certainly suffer a loss.

The hotel went bust and closed almost four years ago in January 2013, with administrators being appointed from KPMG, the firm of accountants.

It had debts of more than £1 million on top of its mortgage of almost £7 million with Alliance and Leicester.

Although the hotel was valued at almost £10 million, the administrators did not expect to be able to sell it for much more than £6 million. The planning inspector said that the site or land value was about £3 million.

A proposed sale this year fell through although contracts are recently believed to have been exchanged with another buyer.

The price of failure

A report by the administrators into the collapse of the hotel business almost four years ago listed outstanding invoices totalling £134,000.

The hotel had also sold gift vouchers worth more than £10,000, mostly to local people and businesses.

More poignantly 17 couples had to rearrange their wedding receptions, some at short notice. All lost their deposits. The hotel had taken £1,000 from all but two of the brides or couples. Those two made a £750 and a £500 downpayment.

The hotel company, Lansdowne Investments, was granted planning permission to turn the hotel into 45 flats by the council.

Lansdowne Investments volunteered in its planning application to include 18 affordable homes in the scheme – in line with the council’s policy of 40 per cent for such projects.

This helped win the support of the council’s Planning Committee in the face of objections from neighbours and some local conservation and civic amenity groups.

Afterwards Lansdowne Investments applied to reduce the number of affordable homes, arguing that the scheme as it stood was not viable.

Unable to persuade the council, Lansdowne Investments appealed and an independent planning inspector, Christina Downes, was appointed to handle the case. She backed the applicants – effectively now the administrators and Alliance and Leicester.

The planning inspector said: “Where an application is made to modify an affordable housing requirement … if it means that the development is not viable, the application should be dealt with so that it becomes viable.”

She said: “There is no doubt that the council has a very great need for affordable housing, especially one and two bedroom units.

“Stalled schemes with unviable affordable housing requirements result in no development and no community benefit. In this case the property is currently vacant and boarded up … The development has stalled.”

A developer called Hove and Brighton Ltd, based in London, was party to the appeal but was no longer involved, the planning inspector said.

Companies House has proposed striking off Hove and Brighton – run by 48-year-old Warren Helman – from the official companies register for not filing legally required paperwork.

The state of the local market

The planning inspector took evidence from the District Valuer Service (DVS) as she wrestled with the scheme’s viability and aimed for a fair and pragmatic solution in keeping with planning law and policy. She also looked at local asking prices and what similar properties were fetching when sold.

She said: “The appeal site is within an attractive road of 19th century town houses in the Brunswick Town Conservation Area that leads directly on to the seafront.

“It is occupied by an imposing five-storey building with various more recent extensions to the rear. This was built in the 1850s as a residential terrace of houses before being converted into a hotel.

“Both parties have considered their valuations on an apartment by apartment basis, taking account of aspect, position within the building, size of unit and the like.

“Although values will go up and down over time, the Land Registry has recorded a rise in values of over 14 per cent in Brighton and Hove between July 2015 and July 2016.

“I was told that the local housing market is relatively buoyant and has not so far been affected unduly by the uncertainties surrounding the UK’s exit from the European Union.

“The appellant referred to several available one and two-bedroom apartments in converted houses in Lansdowne Place. The asking prices varied between £205,000 and £425,000 but the actual sales prices are not known.

“These appear generally to be smaller units than the appeal scheme with no balconies, outdoor space or lift access. They have limited comparative value.

The prices being paid

“Innings House, Palmeira Avenue, comprises a new development of nine flats. The rear faces towards the cricket ground and the property is close to the railway station. There is secure on-site parking and the flats have balconies.

“While the building is within a pleasant tree-lined street, there is a mix of development locally, including some rather large and uncompromising blocks of flats.

“One Hove Park, Old Shoreham Road, is a development of 71 flats that overlooks Hove Park, has on-site parking and is fairly close to the station. However, it is also on a relatively busy main road of mixed character.

“The above developments and the other examples given by the parties provide a useful starting point.

How much the developers will make

“However, the permitted scheme would have the advantage of providing new apartments within a converted building with a unique character and located in perhaps one of the most attractive and desirable streets in Hove.

“Many units would have a sea view. They would also be within reasonable walking distance of the railway station and I observed that there are shops and cafés in the immediate vicinity.

“Unlike the new-build examples above, most occupiers would not have access to on-site parking. However, a survey at application stage showed that there is less parking stress in this part of Hove than in other parts of the town. It seems that the council did not require restrictions on parking permits for new occupiers.

“Valuation is not a definitive exercise and will be based on experience and knowledge.

“However, for all of the above reasons it seems to me that the appellant has underestimated the sales value of the market units.

“In my opinion the DVS has applied a more realistic assessment of this matter.”

As a result she estimated that the developer could expect to make a profit of almost £7 million from converting the derelict former Dudley Hotel into 45 new flats.