MPs for Brighton and Lewes have hailed a “turning point” in the campaign for a second Brighton mainline railway.

The plans include building a new tunnel under the South Downs at Ashcombe and the wider scheme would enable direct travel between London and Brighton via Lewes.

They were joined at the meeting by representatives of London and Southern Counties Railways (LSCR), a private sector consortium backing plans for BML2 (Brighton Main Line 2).

LSCR wants to link Brighton to Stansted via Lewes and Canary Wharf. For local campaigners, a crucial aspect of the plans involves reviving the Lewes-Uckfield link.

Mr Kirby said that he was “pleased that the Transport Secretary has agreed to look at a more detailed feasibility study for the BML2 project when the consortium can provide more information later this year”. 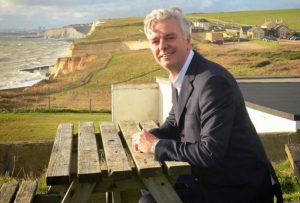 He said after the meeting last Monday (30 January): “During the meeting the BML2 Consortium suggested that the project could be 100 per cent privately funded.

“I was pleased to arrange today’s meeting and feel that it is definitely a step in the right direction.

“This project would bring significant advantages and benefits to Brighton and the surrounding area. It would ease pressure on the congested Brighton to London commuter line, would boost tourism and visitor numbers to the area and would bring more jobs and economic opportunity.

“I also welcome the prospect of direct train services between London and the Amex Stadium.”

He said that the project plans would support the growing population and economy of the south east by increasing capacity and taking pressure off the existing line. This would also make maintenance potentially less disruptive, he said.

Mr Kirby said: “Plans include the return of the single-track railway that terminates at Uckfield to two-track railway – and connections to Lewes, Brighton and Tunbridge Wells reinstated and completed.

“The construction of the Ashcombe tunnel under the South Downs would provide fast direct access to Brighton via Falmer.”

Maria Caulfield, a former Brighton councillor, said that the meeting with Mr Grayling was a “turning point” for the BML2 project.

She said: “Positive discussions were had with the minister around the significance of the proposed line and further work will now be undertaken over the next few months to move the project forward.

“Investors are understood to have the ability to finance the scheme and would also expect to manage the project through to fruition which is seen as an important positive for the scheme.

“Most importantly of all the project would provide rail users across the south east with vital extra capacity, improving journey times and satisfaction, and opening the door for businesses across Sussex to London and further afield.”

After the meeting the Lewes MP said: “The meeting with the secretary of state was positive and as a result detailed work is now being undertaken now which if successful could see work on the line starting in the near future.”

Today she told the Sunday Politics, the BBC South East television programme, that Chris Grayling was “very keen to see this happen”, adding: “The finances need to stack up.”

On the same programme, transport expert Christian Wolmar acknowledged the cost but said that it was an important project.

A spokesman for the LSCR consortium said: “The BML2 project group has done an excellent job in making the case for extra capacity on the Brighton main line route.

“A new privately funded line would create additional connections for towns across the southern counties and benefit millions of commuters on one of the UK’s most overcrowded rail routes.”

He added: “These were initial discussions with the Secretary of State for Transport Chris Grayling who was keen to learn more about the project.

“While the project is still at a relatively early stage, we are encouraged by the interest shown by the secretary of state and look forward to further positive engagement with Department for Transport officials in the coming months.”