Required improvements at Brighton doctors’ surgery have been made, says watchdog

The required improvements at a Brighton doctors’ surgery have been made, according to the Care Quality Commission (CQC).

The official watchdog revisited the Saltdean and Rottingdean Medical Practice, at the Grand Ocean Medical Centre in Longridge Avenue, Saltdean, 10 weeks ago for a check up.

The CQC had previously rated the practice overall as “requires improvement” – the second worst out of four grades.

The report, in June last year, after a visit in April, said that when it came to being safe and well-led it also required improvement.

The critical areas of the surgery – led by Dr Nigel Adams – were reinspected on Thursday 8 December. A report published last week said that it had found the practice overall to be “good” – the second best of the four CQC gradings.

The watchdog said: “The practice was rated good overall and is now rated good for providing safe and well-led services.

“We carried out an announced comprehensive inspection of this practice on (Tuesday) 19 April 2016.

“A breach of legal requirements was found during that inspection within the safe and well led domains. 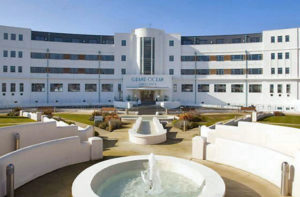 “After the comprehensive inspection, the practice sent us an action plan detailing what they would do to meet the legal requirements.

“We conducted a focused inspection on (Thursday) 8 December 2016 to check that the provider had followed their action plan and to confirm that they now met legal requirements.

“This report only covers our findings in relation to those requirements.

“During our previous inspection (in April 2016) we found the following areas where the practice must improve
• Ensure that all significant events are consistently captured, recorded and shared in order to maximise learning opportunities and to ensure the practice maintains an accurate overview.
• Develop an ongoing audit programme that demonstrates continuous improvements to patient care in a range of clinical areas. Ensure there are at least two cycles of a clinical audit.
• Put plans in place to address lower than average levels of patient satisfaction as identified in the national GP survey. Undertake regular surveys of patient views and act on the results in order to ensure continuous improvement.

“Our previous report also highlighted the following areas where the practice should improve
• Ensure that all staff who undertake chaperone duties are trained.
• Develop a business plan that sets out the future direction for the practice.
• Consider extending the practice’s opening hours in order to meet the needs of patients who cannot attend during working hours.

“During the inspection on 8 December 2016 we found the practice had a system in place to ensure that significant events were captured and recorded consistently in one place.

“We saw that significant events were regularly discussed and that the learning was shared at team meetings.

“The practice now had a formal programme of ongoing clinical audit and that two cycles of one clinical audit had been completed since our last inspection.

“The practice had undertaken a survey of 130 patients and was in the process of analysing the results.

“This along with the results of the national GP survey was due to be discussed at a GP meeting in January 2017 where an action plan would be developed.

“We also found in relation to the areas where the practice should improve
• All staff who undertook chaperone duties had received appropriate training for the role.
• The practice had not yet developed a formal business plan that set out its future direction.
• The partners had considered extending the practice’s opening hours. However, they still felt that they were not in a position to extend their current working hours any further.”