Young people – angered by proposed cuts to the youth service – showered councillors with protest leaflets from the balcony of Hove Town Hall this evening (Thursday 23 February).

Members of Brighton and Hove City Council had been debating the budget for the coming year when the leaflets landed on them in the council chamber.

And some of the protesters chanted: “No ifs. No buts. No youth service cuts.” 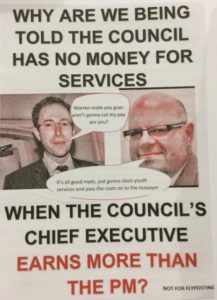 The leaflet asked: “Why are we being told the council has no money for services when the council chief executive earns more than the PM?”

It also said: “Council leader Warren Morgan would like us to believe there’s no money left for services like the Youth Collective, which helps 4,500 of the most disadvantaged and vulnerable young people in our city each year, while refusing to review the salaries of certain individuals who are getting rich off their taxpayer-funded salaries.

“The chief executive for Brighton and Hove City Council, Geoff Raw, earns more than the Prime Minister: over £150,000 a year.

“He is one of four executive team members netting six-figure salaries at the expense of us, the taxpayers.

“How is this acceptable? How can councillors cut 80 per cent of the funding of the vital youth services? It’s like they are cutting these services just to make sure they keep on making big money.

“The council wants to cut our services, cut council workers’ jobs and tear away their livelihoods and then force us to pay more council tax than before for less services.

“Why are we, the people, being forced to pay more for less, but councillors continue to ensure the corporate stooges within the council keep their pay cheque fat?

“We are always told the cuts must come from somewhere but they only ever seem to affect those of us already struggling and never the people involved in making the decisions.

“We’ve had enough. Young people and ordinary working families who pay council tax are done with being ignored and attacked by the people supposed to represent us.

“We have to take a stand … Make sure our councillors hear the people of Brighton and Hove say: protect youth services, cut executive pay.”

Some of the points have been made by the protesters before prompting the council to set out its case on its website here.