A landlord has been ordered to pay £45,650 after he put tenants’ lives in danger in a shared house in Hove.

The fine is the largest to date in Brighton and Hove for breaking the law governing shared houses, also known as houses in multiple occupation (HMOs).

Muharrem Kartal, 51, of Church Road, Hove, was found guilty of over-crowding, letting rooms when he had been told that they were too small to be occupied and failing to maintain shared kitchens and bathrooms in a safe and working condition.

Kartal had previously pleaded guilty to failing to ensure that fire escapes were maintained and free from obstruction and fire equipment and alarms were in good working order.

Brighton and Hove City Council said: “The charges were bought following an inspection by council officers in July 2016 when they found at least 12 people living in the building licensed for a maximum of nine.

“The breaches of houses in multiple occupation (HMO) licensing conditions and management regulations all refer to 28A Church Road in Hove – a four-storey maisonette over a restaurant.”

Kartal had previously been prosecuted for not licensing the property as well as breaches of food hygiene legislation in the Golden Fried Chicken (GFC) restaurant. 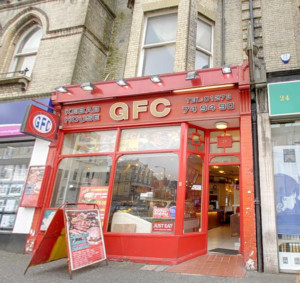 Last year he was disqualified from being a company director for six years – until March 2022 – over problems to do with GFC Kebab House Ltd. He told the Insolvency Service that his address was Tumulus Road, Saltdean.

The council said: “Due to the previous convictions and evidence showing Muharrem Kartal received at least £43,680 annual rental income on the property, the magistrates fined him the equivalent amount and ordered him to pay £1,800 costs to the council and a £170 victim surcharge.”

Councillor Anne Meadows, who chairs the council’s Housing and New Homes Committee, said: “This case highlights the importance of enforcing HMO licensing and regulations in the city.

“Residents in this property were not only living in over-crowded conditions without basic facilities, their lives were put in danger by an unscrupulous landlord taking their rent with little apparent concern for the safety of his tenants.

“That the case went to trial shows how serious theses offences were and I’d like to thank our officers for their diligent work in pressing the case and the evidence they presented in court that resulted in the convictions.

“We have licensed nearly 3,500 HMOs in the city and we inspect all properties as part of the process. HMO licensing has ensured thousands of properties are properly managed and safer for residents.

“We will continue to take action against any properties not up to standard to protect our residents and I urge all owners and agents to ensure they meet legal requirements.”