A Brighton care home requires improvement, according to the government’s official watchdog.

Sycamore Court, in Fitzherbert Drive, off Bear Road, Brighton, was given the overall rating of “requires improvement” in a report by the Care Quality Commission (CQC).

Inspectors said that the home was good – the second best grade – when it came to being caring. But for safe, effective and responsive care and being well led, it was also graded as requires improvement – the third best out of the four grades given by the CQC.

The report, published last week, said: “This inspection took place on (Tuesday) 7 March and was unannounced.

“Sycamore Court is purpose built and was taken over in 2015 by Tradstir Limited. This is the first inspection since the service was taken over by the new provider.

“The service provides residential and nursing care, across three units, for up to 40 older people with increasing physical frailty, many living with dementia or other mental health needs.

“Long-term care and respite care is provided. There were 20 people resident at the time of the inspection.

“Staff told us it had been a significant period of change with a new provider taking over the service, difficulties in recruiting staff and a number of staff changes.

“The registered manager told us for a long period they had been without a deputy manager and clinical lead for the service. This had meant processes and systems had not been fully developed and embedded in the service as quickly as they had planned.

“However, one had recently been recruited and work had already commenced to start to address this. Staff also spoke of changes and improvements which were now starting to be implemented since the deputy manager had started to work in the service. 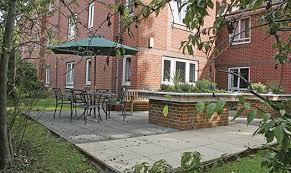 “There were also a lot of refurbishment works being carried out to the building which had led to areas of the building not in use and people being moved out of their rooms for a period while the work was being completed. This was due to be completed shortly.

“Staff spoke of the passenger lift had been out of action for a significant period of time which had been difficult to manage and had restricted the movement of people around the service.

“One the day of the inspection one unit was closed for refurbishment and only half the beds were filled.

“We found regular auditing by senior staff in the service to ensure the quality of the service had not been completed or regularly maintained and embedded in the running of the service.

“We could not identify how the provider monitored or analysed the information received to look for any emerging trends or make improvements to the service provided. This is an area which requires improvement.

“People received care in an environment that was clean and tidy. However, regular health and safety checks of the building had not been maintained and not all risk assessments had been completed.

“Records were not fully accessible for senior staff to refer to and ensure essential checks of the building and services had been carried out. This is an area which requires improvement.

“Senior staff monitored people’s dependency in relation to the level of staffing needed to ensure people’s care and support needs were met.

“Feedback from people and staff was that there was usually enough staff to meet people’s care and support needs.

“Staff told us they were supported to develop their skills and knowledge by receiving training which helped them to carry out their roles and responsibilities effectively.

“However, training records were not fully up to date so it was not possible to evidence this. This is an area in need of improvement.

“The registered manager told us all care staff were now being taken through the care certificate. Senior staff were monitoring this with staff to ensure its completion.

“Staff told us they felt well supported by the senior staff who were accessible. However, feedback and records showed us that not all the staff had received regular individual supervision or appraisal.

“Senior staff told us of the work which had commenced to address this. This is an area in need of improvement.

“People told us they had felt involved in making decisions about their care and treatment and felt listened to.

“Senior staff acknowledged that some reviews had fallen behind and it was not possible to fully evidence people’s current care and support needs and any risks that had been identified as people’s care plans were in the process of being reviewed and transferred onto the new system.

“People’s nutritional needs were assessed and recorded. People told us they enjoyed the food provided.

“However, where people were being supported with their fluid intake, records had not been fully completed for care staff to refer to. These are areas in need of improvement.

“People were able to join in a range of meaningful activities. Staff told us there were two part-time activities co-ordinators who were trying out new ideas for activities and were receiving support and guidance on providing activities for people living with dementia.

“However, feedback we received was that activities for people who stayed in their own rooms had not been fully developed. This is an area in need of improvement.

“Medicines were stored correctly and there were systems to manage medicine safely.

“Consent was sought from people with regard to the care that was delivered. Staff understood about people’s capacity to consent to care and had a good understanding of the Mental Capacity Act 2005 (MCA) and associated legislation which they put into practice.

“Where people were unable to make decisions for themselves staff were aware of the appropriate action to arrange meetings to make a decision within their best interests.

“People told us they felt safe. One person told us, ‘I am safe and happy and will give them thumbs up.’

“Another person told us, ‘I feel safe here. They take me to the balcony to smoke and watch me and bring me in.’

“We observed staff speaking with people in a kind and respectful manner and saw many examples of good natured but professional interaction.

“Staff were aware of the values of the service and understood the importance of respecting people’s privacy and dignity.

“A compliment received by the service detailed, ‘It was clear to us that mum felt safe and well cared for during her short stay at Sycamore Court. This was important and reassuring.’

“Procedures were in place for people and their relatives and their representatives to raise any concerns.

“No one we spoke with had raised any concerns but they felt it was an environment where they could raise issues and they would be listened to.”