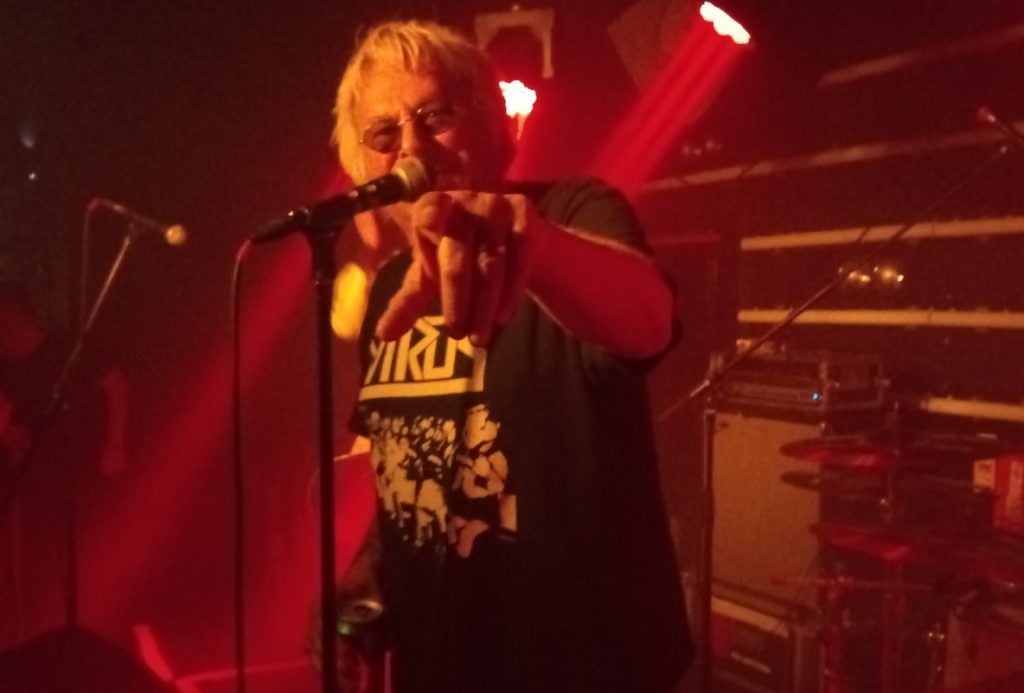 The word legend can be banded around quite a bit, but to be honest the UK Subs singer and East Sussex resident Charlie Harper is a legend – full stop. He puts punks half his age to shame. He is a war baby as he entered the world in 1944. So at the time of this gig that makes him 72 years young. My God the energy this man has is immense. The Subs are forever touring here and there plying their aural punk wares around the globe. He sure is a prime lesson of growing old disgracefully – nice one son, errrr dad, errrr grandfather.

The last time I witnessed the UK Subs was the final appearance of the popular Jet on guitar. I was preying that his replacement would be up to the job. I needn’t have worried as new guitarist Steve Straughan (whom I believe I watched on 11th June 2016 at Concorde 2 as a member of the Angelic Upstarts) is very accomplished indeed. He can even balance on the drums whilst playing guitar without breaking them or falling off! 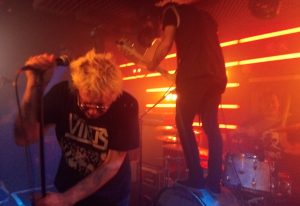 Oi Steve get off me drums!

The other two members of The Subs are bassist Alvin Gibbs (who originally joined in 1980 and has been a member on and off ever since) and serving up a culinary drumming delight tonight is Jamie Oliver. No not that one! The Subs formed in 1976 as (The UK) Subversives and have released 26 A to Z titled albums from 1979 to 2016 as well as other miscellaneous albums and singles during their 40 year career history. So the boys are in it for the long haul. But fans are always really keen on their earlier work and this fact is always highlighted in their live gigs, as a majority of the tracks were culled from their first five albums. Having said that, they did give outings to a couple of tracks from their last album entitle Ziezo, namely City Of The Dead and I’ve Got A Gun.

The eager crowd was jumping around to every song as they always do and much jolliment was there to be had. I was fortunate to have made my way to the front of the crowd and was unlocking my phone in order to take some photos and cheeky Charlie announced that there was someone down the front texting (as in it was a crime). For the record I wouldn’t dream of texting during a Mr Harper performance. However, the redeeming factor was that I was one of a few lucky punters encouraged to sing Warhead over the mic – happy days!

It’s really hard to pick out the best tracks tonight but Emotional Blackmail, Teenage and Stranglehold went down rather well. Tonight’s UK Subs setlist reads: Emotional Blackmail, Kicks, You Don’t Belong, Left For Dead, Rockers, Down On The Farm, Endangered Species, Young Criminals, Barbie’s Dead, Fear Of Girls, City Of The Dead, I’ve Got A Gun, Crash Course, Tomorrow’s Girls, Teenage, Party In Paris, Police State, Warhead, Riot, Stranglehold, Disease. But I have a feeling there might have even been one or two more at the end. Support tonight came from a female fronted punk rock outfit from Maidstone called Snide. To me they sounded a bit like Bristol’s finest Vice Squad. Their line-up included drummer Alan Galaxy, whom I believe I saw up at Brighton Racecourse last year at the Undercover Festival as he was (and could still well be) the stickman for Department S. I really hope that he hasn’t left the band as they were to me the surprise package of the whole event. I really enjoyed I Want and Is Vic There?

For the record, the remaining members of Snide are Lou on vocals, Rob on guitar and backing vocals and Nobby on bass and backing vocals. They performed thirteen numbers including the finale of their version of The Adicts song Viva La Revolution. Their setlist being: Hard Work, Hey Mr Joseph, Recluse, Miserable Bitch, I Don’t Want You, Peace Of Mind, Invisible, Bring It On, Last Night I Said, I Believe, Disorder, I Don’t Care, Viva La Revolution.

For information on Snide visit: www.facebook.com/Snidepunk

Further details about UK Subs can be found here: www.uksubstimeandmatter.net and www.uksubs.co.uk