Hundreds turn out for Save Our Schools rally

Save Our Schools Brighton and Hove organised two “school assembly” rallies in the sunshine at The Level, in Brighton, yesterday (Friday 26 May) and in Victoria Park, Portslade.

The Green candidate for Brighton Pavilion Caroline Lucas was the first to take to the podium at the rally at The Level. She applauded teachers across Brighton and Hove, thanking them for their hard work, dedication and courage. 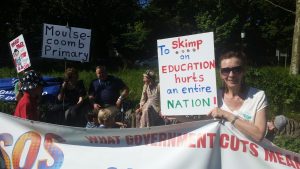 However, Mrs Lucas, Britain’s first Green MP, criticised the Conservative government for a real terms fall in pupil funding because of a projected increase in pupil numbers.

She said: “In real terms, there is still a 3 per cent per pupil funding cut between now and 2021-22 when you allow for the expected increase in pupil numbers. The schools budget needs to increase, not be cut.

“And it needs to increase by between £6 billion and £7 billion according to the Association of School and College Leaders.”

Save our Schools estimate a cut of £487 per pupil or £193,425 per school in Brighton and Hove by the next election in 2022 if cuts continue at the present rate. For secondary schools the national average estimate is higher – £378,298.

Mrs Lucas also criticised Conservative plans to scrap free lunches and replace them with (cheaper) free breakfasts which, she said, was giving with one hand and taking with the other. She said the Conservative manifesto reads like Oliver Twist.

Defending Conservative education policy, Prime Minister Theresa May said that the dedicated schools grant “is at its highest on record at more than £40 billion in 2016-17 and is set to rise to £42 billion in 2019-20, with increasing pupil numbers.”

According to Sandra McNally, professor of economics at Surrey University, the Conservatives’ figures are misleading. This is because the “per pupil figure” was frozen from 2010 to 2011 and again from 2015 to 2016.

She argues that an increase in the core funding for schools is not the same as an increase in the amount per pupil. A freeze in cash terms is likely to result in a reduction in real terms of 6.5 per cent between 2010 and 2020. This reduction has not happened yet and school funding has doubled in the last 20 years.

If you want to check the estimates, you can search for your child’s school on the school cuts website here. 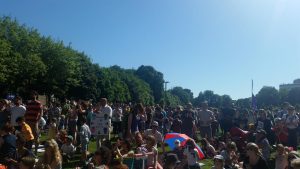 Marisol Smith, who chairs the governors at Moulsecoomb Primary School, said that the cut to funding would mean that 40 per cent of their children would not be able to go away for five days towards the end of year 6 because the school would no longer be able to subsidise the trip.

It also would mean that the school would have to make its counsellor redundant, leaving vulnerable children to join the queue for the Child and Adoslescent Mental Health Services (CAMHS) while their mental health deteriorates.

She said it was often a challenge to get parents to apply for free school meals but, when they did, that provided the evidence for the pupil premium.

Emily Tester, the Liberal Democrat candidate in Brighton Kemptown, said: “Lib Dems would reverse the £3 billion funding cuts nationally and protect per-pupil funding in real terms. In addition, we’d make a £4 billion investment to lift the pay freeze on teacher’s salaries, give more free school meals and triple the early years pupil premium to £1,000 for a fairer start in life.”

Solomon Curtis, Labour candidate for Brighton Pavilion, said: “We have to seriously make sure we have the right policies: 37.5 per cent of the population is under 30 years old but only 2 per cent of MPs are. No wonder we’ve seen cuts. No one in Parliament is standing up for us.”

“Do not be intimidated by people who tell you we can’t afford to fund education. Keep on with the struggle because failure cannot be an option.”