The Blue Plaques of Hove 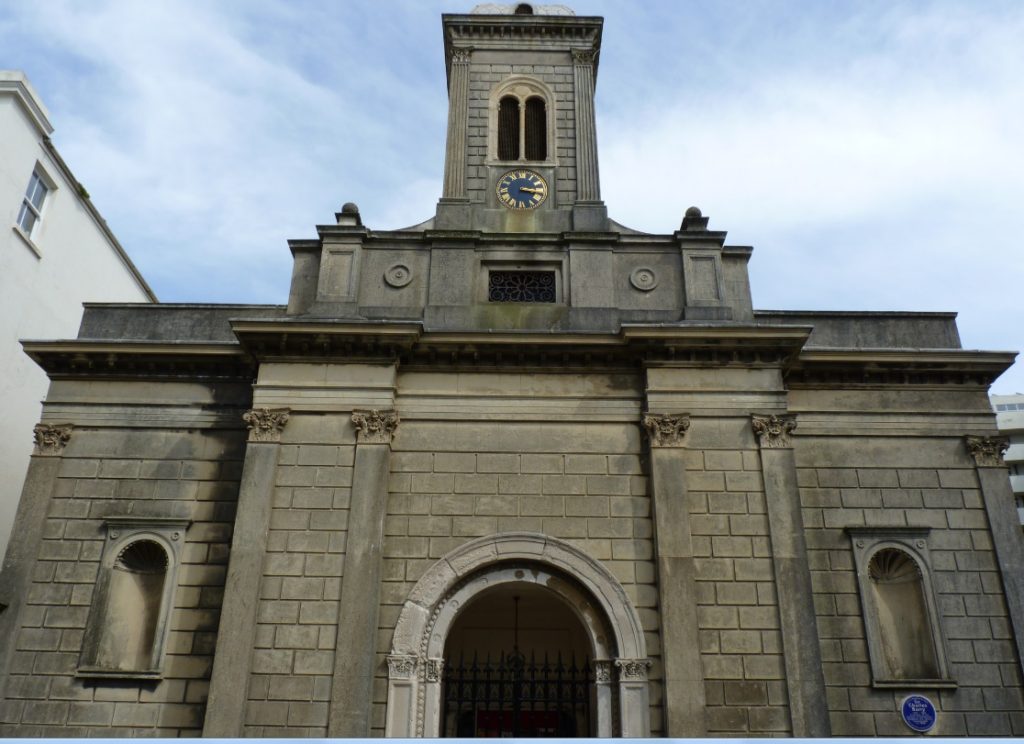 Following on from my historic Blue Plaque discovery tour of Brighton a few weeks back, I thought that it was only true and proper to have a leisurely wander around Hove this time around.

So I met up with Martin, my partner-in-crime, and we ambled along the edges of Brighton at Western Road in order for me to endeavour to locate the missing blue plaque from my earlier Brighton tour.

As luck would have it, my eyes were drawn to a guitar sitting sadly by itself in a doorway and then I simply looked above the doorway and success, there it was – Admiral Sir Edward Codrington 1770-1851 hero of the Battle of Navarino lived here 1828-1832. A great start to our afternoons adventures. I took my photo of the plaque and looked down below the round blue sign and luckily the guitar had been joined by its rightful owner, who had the pleasure of loudly slurring to me that Silver Machine 1972 was the best song ever! I replied Hawkwind to him, which certainly made his day or it could have possibly have been the several tipples that he had previously consumed. But alas I had sadly failed to inform my new chum that the song in question had got to number three in the UK singles charts exactly 45 years ago. 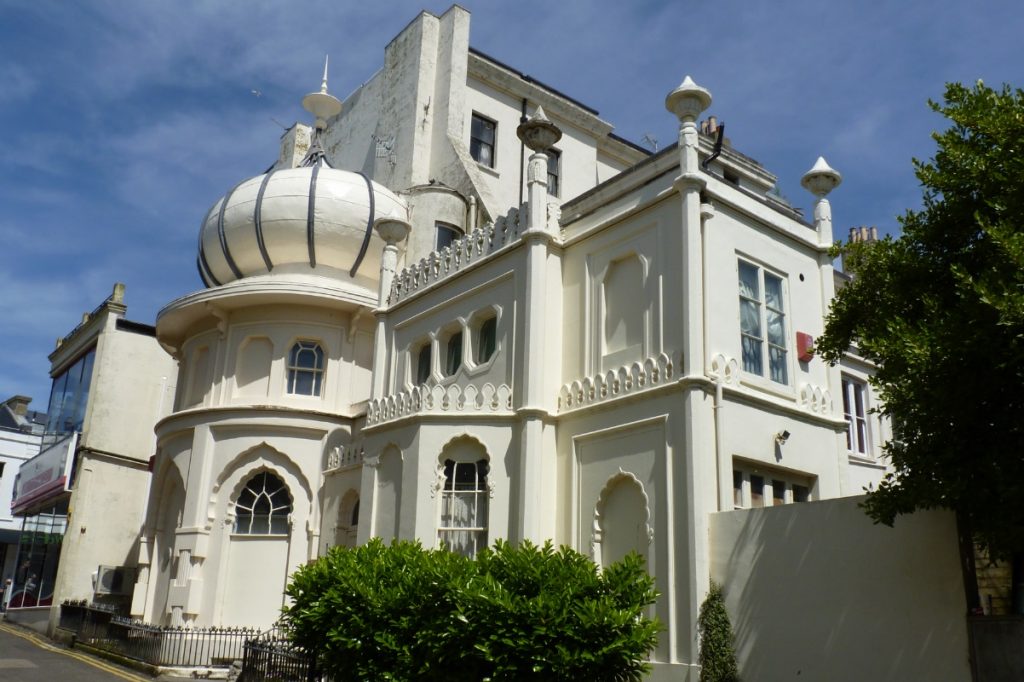 The Western Pavilion in Western Terrace

We crossed to the southern side of the road in order to take in the splendid architecture of Western Terrace, which proudly displayed two plaques, one of which boasted Brighton Borough Council Design Award 1992. We were literally feet from Brighton’s arguably busiest thoroughfare and yet we felt that we had taken a step back in time. We marvelled at the oriental style of the Western Pavilion which was constructed in 1831 and the properties opposite, including the Gothic House which was built eight years earlier. We also took in the vista of the building from Western Road which had an impressive looking restaurant up in the sky. However, I do believe that this has sadly closed down now, which is sad, as Martin had recollected visiting it several years ago and can still vividly remember its opulence. One of the windows of the building (which I can remember as Debenhams) was ajar and I do hope that someone was inside as otherwise it is open to the elements and the pigeons will get in and then the restoration bill will soar. 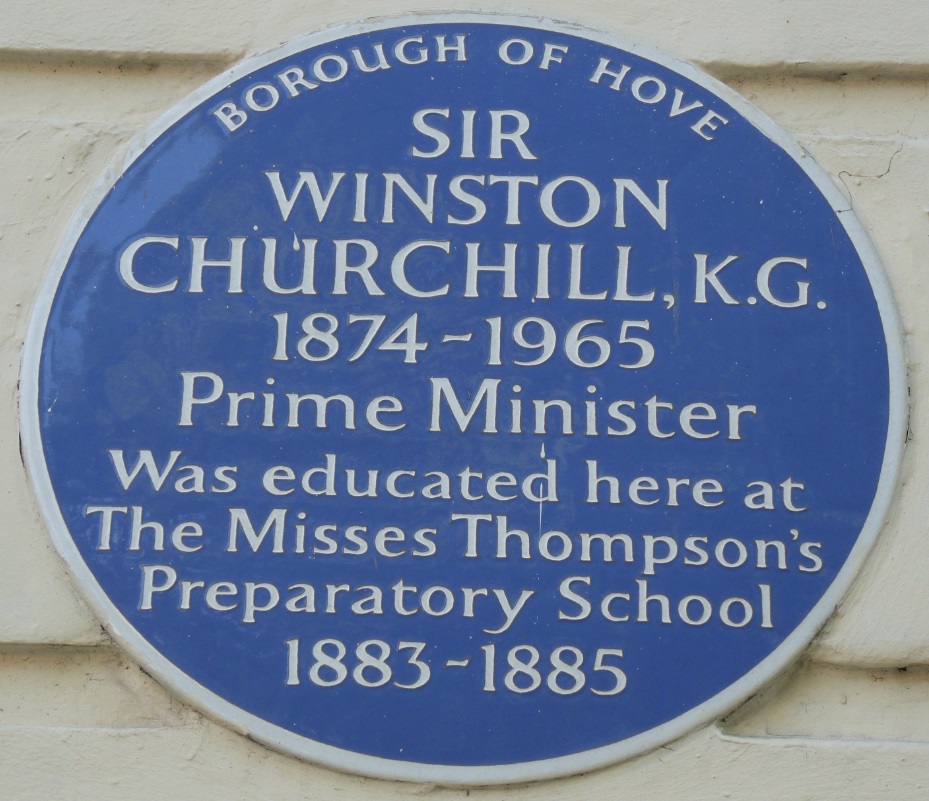 We headed into Hove proper and our first blue plaque discovery was at Lansworth House 29-30 Brunswick Road and was quite an eye opener as it was inlaid into the building stating that Sir Winston Churchill, K.G. 1874-1965 Prime Minister was educated here at The Misses Thompson’s Preparatory School 1883-1885. We were both unaware that Churchill had any connections with our city, so that was a pleasant surprise. 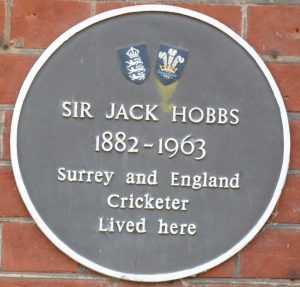 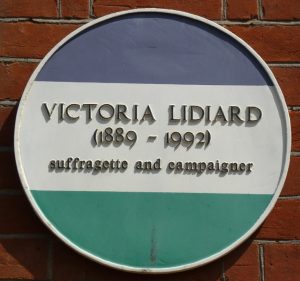 We ventured to 109 Lansdowne Place to view the plaque celebrating the birthplace of a hero of The Great War, Captain Theodore Wright VC and then along to 13 Palmeira Avenue to see where legendary England cricket batsman Sir Jack Hobbs had resided, as he was the best in the world prior to WW1. Up one street number and literally over the road at number 14 was an unusual tricoloured plaque celebrating the last living suffragette and campaigner Victoria Lidiard, who passed away aged 102, having impressively published her first book three years earlier.

We visited 12 First Avenue to see the plaque of the childhood home of playwright and author Patrick Hamilton, then we strained our eyes at the weather beaten stone of Austrian Chancellor Prince Clement Metternich, then a blue plaque for architect C A Busby and one stating that Charles Dickens had visited John Leech and then one for author Edward Carpenter and one erected to show where composer and conductor Sir Hamilton Harty had died. 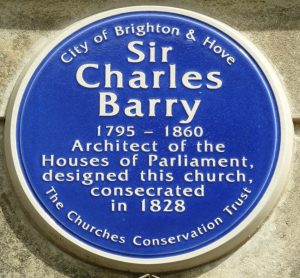 Next up was artist Robert Bevan, then one for the birthplace of composer Roger Quilter and an interesting one for Admiral Sir George Augustus Westphal who was wounded at Trafalgar on H.M.S Victory. An aptly named circular plaque for historian J.H. Round followed and then one that nicely links in with my recent Queen’s Park article, as it commemorates that Sir Charles Barry had designed the imposing St. Andrew’s Church in Waterloo Street in 1828. We even stumbled across a blue plaque celebrating a WW2 secret agent in France by the name of Georges 53 aka Captain Edward Zeff MBE. 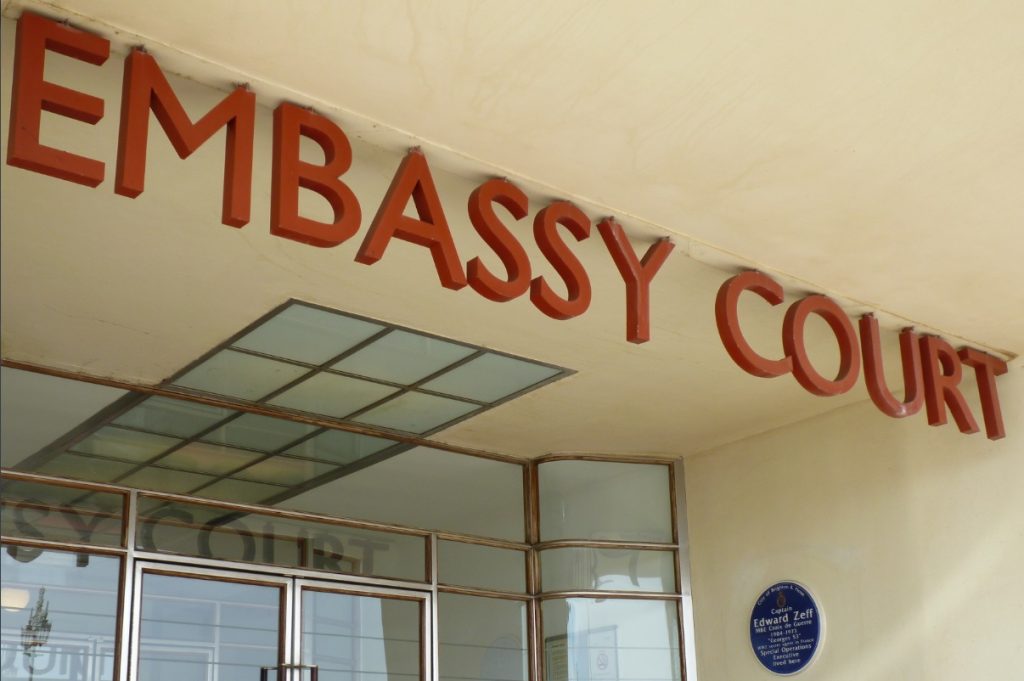 By now we had certainly built up quite a thirst, just like our new chum in Western Road and so we headed for a local watering hole of some traditional character that blended in with our afternoons work, namely The Lion & Lobster in Sillwood Street. This is quite an enchanting and eccentric building in colour and especially in its rabbit warren interior layout as it is set over several floors, which are full of curios and bric a brac. It is truly unique and a comfortable relaxed setting for us two weary souls to discuss everything that we had absorbed from the streets of Hove.

You might wish to find out more information by visiting these websites:

Leave a Reply to The Baron Cancel reply