Long-serving Patcham councillor Geoffrey Theobald tore apart the evidence of a flood and drainage expert at a planning inquiry in Brighton this morning (Wednesday 14 June). 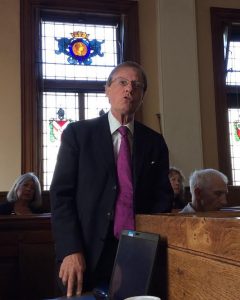 Councillor Theobald indicated that McCarthy and Stone had been badly advised when they bought land in Old London Road, Patcham, where they want to build 44 retirement flats.

He spoke out the morning after Paul Jenkin, water management partner at consultants Peter Brett Associates, had given expert evidence to the inquiry at Brighton Town Hall.

Mr Jenkin drew gasps of astonishment when he told planning inspector Katie Child that McCarthy and Stone’s site had not been affected by the flooding in 2000 and 2001.

She must decide whether to recommend that McCarthy and Stone are given planning permission to build the retirement complex.

Councillor Theobald produced a substantial file of newspaper cuttings about the floods in Old London Road. Many of the cuttings included photographs taken at the time and residents’ stories.

The flooding of Old London Road was no surprise, he said, because a river runs through it – the underground River Wellsbourne. In evidence, he submitted an extract from the Encyclopaedia of Brighton.

The existence of the underground river and the floods of 2000 and 2001 were public knowledge, he said, adding: “For McCarthy and Stone not to know this beggars belief. I do wonder whether if McCarthy and Stone had researched this, they might not have gone ahead (with this application).”

And if McCarthy and Stone and its subsidiary company YourLife Management Services went ahead and built retirement flats on the site, he predicted that they would have a problem selling the homes.

Councillor Theobald said: “It’s my opinion that very few people in Brighton and Hove would buy one of these flats because any solicitor worth his salt advising them would know the history of this site.

“Mr Jenkin in his evidence stated that as far as he was aware there was no flooding on this site in 2000 and 2001.

“If their drainage expert was aware of what happened in 2000 and 2001, would McCarthy and Stone be going ahead with this development?

“If you were to ask me what is the worst site in Brighton and Hove to put a development like this, it’s here. It’s right on top of a river.” 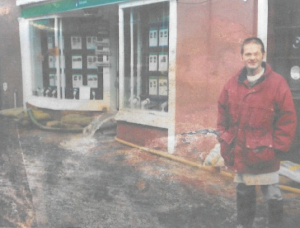 After the 2001 floods, he said: “We pumped out three million gallons of water. There were five pumps working non-stop to keep buildings dry but they didn’t succeed. Residents couldn’t use their toilets. They couldn’t use power sockets … Residents were marooned.”

He cited several other floods in the area since he was first elected in 1968 – and retired engineer David Harris, of Old London Road, later gave more details from years of records that he has kept.

After the floods of 2000 and 2001 Councillor Theobald said that he wrote to Sir John Harman, who was the chairman of the Environment Agency at the time.

He wrote back: “The only practical way to reduce the risk of similar occurrences in the future is to dramatically increase the capacity of the city’s drainage down through the Steine to the sea.”

Councillor Theobald said: “It will happen again unfortunately and this scheme will make it a hundred times worse.”

Adrian Howard, of Old London Road, was the first neighbour to speak. He touched on the experience of living through the 2014 flood.

His elderly mother was forced to move out for six months while reconstruction work was carried out after he had spent a fortnight pumping out his home. 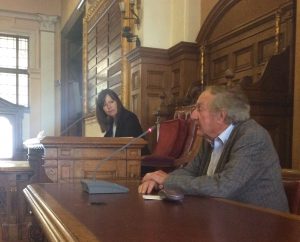 Mr Howard said: “It caused my mum a lot of emotional distress.

“This development can only increase the likelihood of flooding and drainage problems.

“The area has a history of serious groundwater flooding with sewage overflowing into homes, gardens and streets.”

Ken Childerhouse, of Old London Road, warned of the increased danger to others if McCarthy and Stone was given planning permission.

Mr Childerhouse said: “The flood risk in Patcham is real and getting worse. We are getting far more extreme weather.”

McCarthy and Stone’s barrister Robert Walton said yesterday that the retirement flats would be built higher than the flood level – not just if there was a 1 in a 100-year flood but a 1 in a 1,000-year one.

But Mr Childerhouse said: “Experts – we only have to go back to last week – are often wrong about their predictions.

“Developers can develop and walk away and leave others to pick up the bill.

“What alarms me about this particular planning application is that the homework does not appear to have been done. 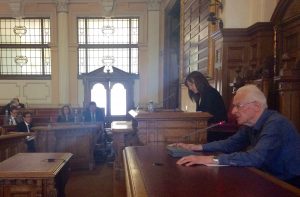 He recalled having sandbags outside his home and a manhole cover being forced into the air like a champagne cork by the pressure of the rising groundwater.

He said: “The fountain was spectacular.”

Mr Childerhouse said that he wasn’t against development in principle and had once served as a member of a planning committee.

But the bulk of the McCarthy and Stone proposal would upset the character of the area.

He said: “I’m amazed the application is still in front of us. It’s got planning a bad name.”

Frank Humphrey, of Old London Road, also recalled earlier floods. He said: “Surface water started to squirt up through the concrete floor of my garage.

“We had a small vertical wall which cracked and water was spurting through the brickwork. The garden was saturated.

“The road was like a river with sewage in it. We saw manhole covers blasted up. Holes were blasted in the road too.” 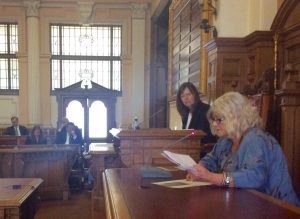 And warning about the possible consequences of McCarthy and Stone’s plans, he added: “Any infrastructure built near an underground river can divert its flow.”

A neighbour Gary Waller said that Patcham was mentioned in the Domesday Book and there was a 12th century church near by.

He said that McCarthy and Stone was trying to build something so out of scale that it was like a castle.

He added: “The castle is too big for the village. And the village doesn’t need McCarthy and Stone as the new lords of the manor.”

Jan Steele, of Vale Avenue, prompted laughter with a reference to Brexit – Britain’s exit from the European Union – when she said that she had one word for McCarthy and Stone: “Pexit!”

The planning appeal is expected to end tomorrow (Thursday 15 June).