Brighton and Hove tower block residents are being urged to stick with the stay put policy in the wake of the devastating fire at Grenfell Tower in Kensington yesterday morning (Wednesday 14 June). 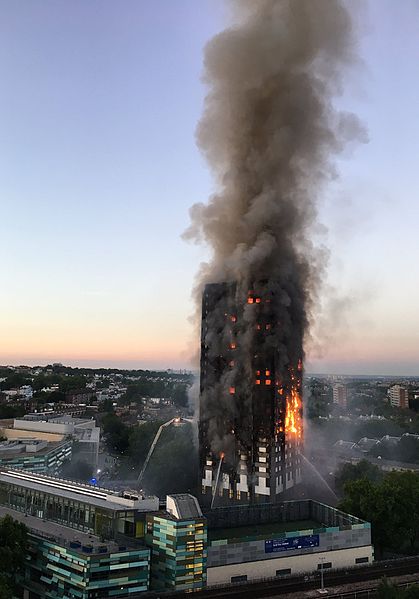 Seventeen people are now confirmed to have died in the Grenfell block tragedy, with the total set to rise much higher as dozens of people are still unaccounted for.

There has been speculation that the fire was able to spread so quickly because of the cladding recently installed on the outside of the building, with reports that it was made of non-fire retardant material.

Several Brighton and Hove tower blocks have also been clad in recent years – but fires at these blocks have remained contained, which is reassuring residents.

Dex Allen, who until 18 months ago was Brighton and Hove’s fire safety manager and who now runs his own consultancy, said that while it was too early to speculate on the causes of the Grenfell block blaze, it was clear that the building was burning in a way it shouldn’t do.

But he said people in Brighton and Hove shouldn’t panic – and that where there was a stay put policy, it would work. He also invited managing agents to come to a free session on fire safety in residential blocks next week, which he has been planning for more than a month.

And Councillor Caroline Penn, who visited a tower block earlier this year where a candle fire had gutted one flat, said that the stay put policy there had worked as there was no damage to neighbouring flats.

Mr Allen said: “There is too little information available at this time to speculate on the causes of the fire or the reasons for the rapid fire development, but it’s clear that the building is burning in a way which it shouldn’t.

“There are many blocks that have been purpose built since the 1960s that have been constructed to support a stay put or defend in place strategy where evacuation is not necessary. In such blocks fire detection systems that are installed throughout the building are not always required.

“Because the policy in the event of a build is for other residents to stay there, there’s no requirement for a fire alarm system. And when you’re trying to get in and put the fire out, you don’t want everyone inside trying to evacuate.

“This type of construction is generally sound as long as it is well maintained and there are no significant additions to the building that compromise the design fire strategy. Such additions may include external cladding or additional extensions to a property.

“Most of the blocks in Brighton and Hove, particularly since the late 1960s, are fairly safe and the stay put policy that’s adopted by the majority of them will work.

“The public can have confidence in the fire safety regulation regime in place locally and the professionalism of local crews.” 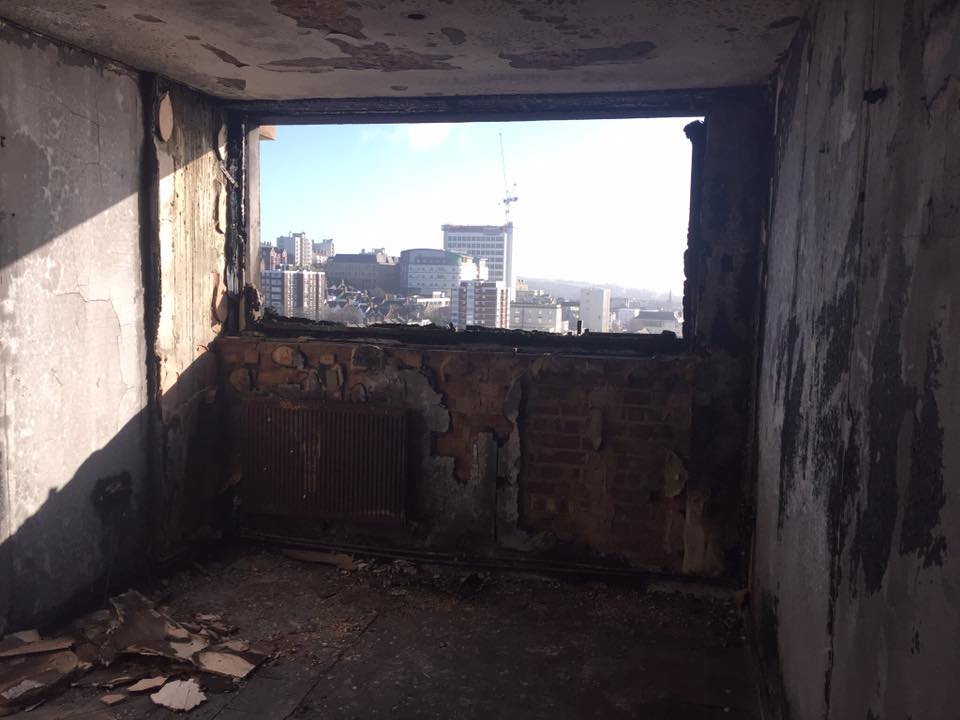 The flat visited by Caroline Penn, gutted by a fire started by a candle. It did not spread to neighbouring flats

Caroline Penn, who represents Brighton and Hove on the East Sussex Fire Authority, said: “I’m absolutely shocked and saddened by the fatalities in the Grenfell Tower.

“While it would be wrong to make any assumptions or judgments before a full investigation, residents reported that no fire alarms went off.

“As member for equalities and inclusion on East Sussex Fire Authority, I visited a tower block where a fire had recently occurred. It had started by a candle but the resulting fire was awful (there were no injuries).

“In tower block fires, the advice is to stay put. Each flat is like a concrete box which protects the inhabitants. I was really surprised that next door to the flat destroyed by fire had no damage. Smoke inhalation is by far the biggest killer.

“The fire staff I work with are incredibly passionate about their job. About fire and water safety, about community safety and fire prevention as well as being incredibly brave – running into buildings when everyone else is running out.

“My thoughts are with those who lost their lives in this awful tragedy, and for the incredible fire fighters from London and Surrey still working to make the area safe.”

Carole Donovan, a member of the Bristol Estate Community Association (BECA), said that residents of clad high rises, including herself, were understandably anxious.

But the fact that fires at Essex Place, including a fierce blaze in February 2016 which killed community campaigner Chris Cooke, had not spread to the rest of the block was reassuring.

She said: “Because we have had buildings reclad, it’s a bit of a worry, but the block Chris Cooke died in had been clad and it didn’t spread, which has put minds more at ease.

“All the flats have fire alarms, but we don’t have them in the hallways and there are no sprinkler systems. The biggest worry is that there are regular gripes about the quality of Mears’ workmanship and that’s obviously making people anxious.

“But it sets people at ease that the Essex Place fire didn’t spread. We have got to hope that the council will revise and check what’s been done.”

At least two fires have broken out at Essex Place since it was clad, one in February 2016 and the other in September 2016, on the 13th and 15th floors of the 16-storey block respectively. Despite severe damage to both the flats where the fires started, the flames did not spread any further.

Yesterday, East Sussex Fire and Rescue Service repeated the advice that it is usually safer to stay inside your flat if there is a fire elsewhere in the building unless the heat or smoke is affecting you – although this advice may change once firefighters are on the scene.

It said: “If there is a fire in your building but not inside your own home, then you are usually safer to stay in your flat unless the heat or smoke from the fire is affecting you. If you stay put you should still immediately call 999.

“It is important to remember that this advice may change and you should follow the instructions of firefighters when they arrive on scene.”

And Brighton and Hove City Council said it would review fire safety processes, but until the Grenfall Tower investigation is complete, it could not speculate on the cause or causes.

Mr Allen’s free course for residential managing agents will be held from 10am to 1pm next Thursday (22 June) at the Winter Garden Rooms at the UK Blind Veterans building, in Greenways, Ovingdean.