Teenage photographers are putting on an exhibition of their work inspired by the romantic painter John Constable at Brighton Museum and Art Gallery. 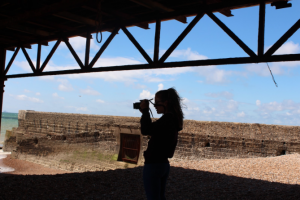 Retracing Brighton showcases their photographic take on the area almost 200 years after Constable lived in the town and produced dozens of works here.

The young artists are part of the Capture Collective, which brings together 13 to 16-year-olds through a photography club run by Photoworks, the organisation behind the Brighton Photo Biennial, Britain’s biggest international photography festival.

The Capture Collective were inspired by the Constable and Brighton exhibition at Brighton Museum and Art Gallery and retraced his footsteps through the area.

Armed with their cameras, the youngsters explored Brighton and went to Rottingdean Windmill, St Ann’s Well Gardens, the Devil’s Dyke and the beaches around the former Chain Pier. They learnt to see their home town with a new focus.

One of them, 13-year-old Betty, said: “Taking part has made me look at my city in a whole new way. It’s been great fun and I’m hoping to make much more photography in the future.”

The young photographers were also inspired by Constable’s close relationship with the outdoors and with the sea while he lived in Brighton – and his attention to detail.

The Capture Collective collected objects on their walks such as driftwood, stones, seaweed and plants to photograph in the studio. They also experimented with alternative forms of photography such as sun prints and camera obscuras.

Photoworks learning and engagement curator Juliette Buss said: “Working with the Capture Collective and the team at Brighton Museum and Art Gallery has been hugely inspiring for all involved.

“We hope visitors will find the exhibition and this fresh look at our city similarly inspirational.”

The Capture Collective work with young people between 13 and 16 culminates in them producing photographs for a display and gaining an Arts Award certificate.

Retracing Brighton by the Capture Collective opens at Brighton Museum and Art Gallery in the South Balcony on Saturday 15 July and runs until Sunday 10 September.

Constable and Brighton opened on Saturday 8 April and runs until Sunday 8 October. The exhibition brings together more than 60 of his sketches, drawings and paintings from his time in Brighton for the first time in the place where they were created.