Brighton council chief sends out warning to flytippers and litterbugs

The councillor responsible for keeping the streets of Brighton and Hove clean today issued a warning to flytippers and litterbugs.

Councillor Gill Mitchell, deputy leader of Brighton and Hove City Council, spoke out after a flytipper was given a suspended prison sentence for dumping rubbish that he had been paid to remove. 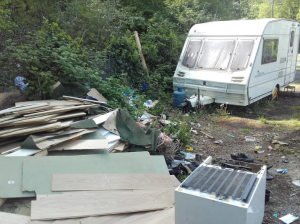 She said today (Tuesday 8 August): “This was an outrageous act of flytipping which showed zero respect for the city’s environment or the people who live here.

“We’ll always prosecute flytippers when we can identify them and urge the public to help us do that wherever possible.”

Brazil, 38, of Ridge View, Coldean, was given a 24-week prison sentence suspended for two years and ordered to carry out 50 hours of unpaid work for the community by Brighton magistrates.

He pleaded guilty to flytipping after dumping laminated flooring, chipboard underlay and black sacks of other rubbish near the Lewes Road rail viaduct in April.

Mr Brazil said that he had charged a customer to dispose of the materials legally. The court was told that he had planned to take the rubbish to the tip in Wilson Avenue, Whitehawk.

The council said that this would also have been illegal because businesses are not allowed to use tips intended for domestic rubbish like the tips in Wilson Avenue or Leighton Road in Hove.

They are required by law to dispose of their rubbish using dedicated trade contractors or facilities.

Brazil was ordered to pay the council £750 for legal costs, £500 for clearing the rubbish and a victim surcharge of £115.

He was told to attend drug rehabilitation for the next three months. And the court also ordered Mr Brazil, who has a similar previous conviction, to remove a caravan from the Lewes Road site within a few days.

The council has also been prosecuting people for failing to pay fixed penalty fines for dropping litter.

Richard Beech, 44, of Alverstone Road, Portsmouth, was convicted in his absence at Brighton Magistrates’ Court of dropping a cigarette in Cranbourne Street, near Churchill Square.