Brighton Dome lit up by The Darkness 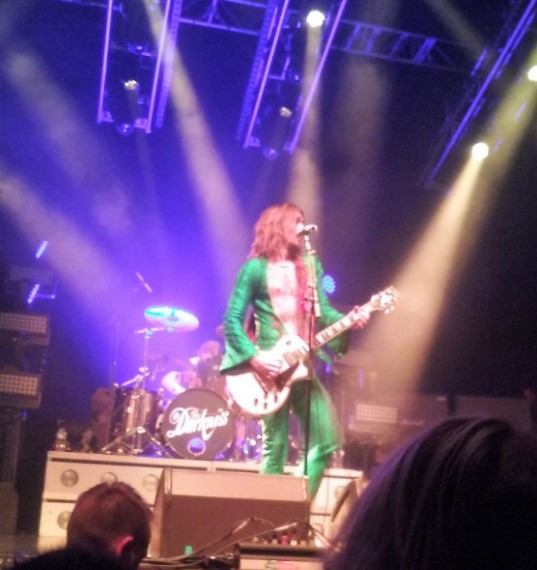 Brighton’s historic Dome Concert Hall rocked on Monday night (11th December) to the exuberant sound of The Blackfoot Gypsies followed by The Darkness, accompanied by an audience of energetic fans. The atmosphere was one of joyful abandon amongst the standing audience who were dancing as one in a cohesive clump of sweaty humanity.

The special guests, Blackfoot Gypsies are a 4-piece band from Nashville, USA whose rock’n’roll combined with upbeat country music was well received and beautifully performed. Their image was, as you would expect, quirky, brightly coloured and humorous.

The lead singer, Matthew Paige reminding me of a very young Noddy Holder, Ollie Dogg an accomplished harmonica and bird whistle player, with some amazing drums and bass work by Zack Murphy and Dylan Whitlow respectively.

They formed in 2010 and released their second album in 2015 called ‘Handle It’ on the Plowboy Records label. Let’s hope that we see more of them in the near future, as this is only their first tour of Europe having previously played some big events in the USA.

Many of the “Darklings” are people who have been following the band since their conception on New Year’s Eve 1999 and others include the millennial generation, who have grown up with the satirical glamour that The Darkness deliver so reliably.

Lead singer Justin is a master of audience interaction, picking out people he recognised and greeting them, including the “lady from Lush” whom he met that afternoon in the East Street shop. Justin was surprisingly thrilled that she had recognised him!

It transpires that it was Dan’s birthday to boot, so the fans sang to him and the atmosphere rapidly became like a family party.

This intimacy with the audience was further ensured when one fan requested a high five with Justin, who immediately obliged with a leap on to the fans raised arms and thus the crowd delighted in passing him overhead as he crowd surfed.

The set covered hits from the very first album (Permission To Land) to the latest, Pinewood Smile, including their two recent singles Solid Gold and Southern Trains.

The sound was 100 per cent live. As Justin explained, there would be no synthesisers or pre-recorded assistance and the performance was faultless.

It was terrific in witnessing The Darkness appearing in such a fine historical venue. The Brighton Dome is a beautiful venue, built in 1803-1808 by architect William Pordon, as the stables for the Prince Regent, later King George IV. It has been renovated and opened in its present form in 2002.

Tonight, the provision on the bar of complimentary water and ear plugs were a thoughtful and well received touch. The staff were all polite and professional ensuring order was maintained throughout, despite the boisterous behaviour of so many “Darklings” having a lot of fun. A fantastic night out! 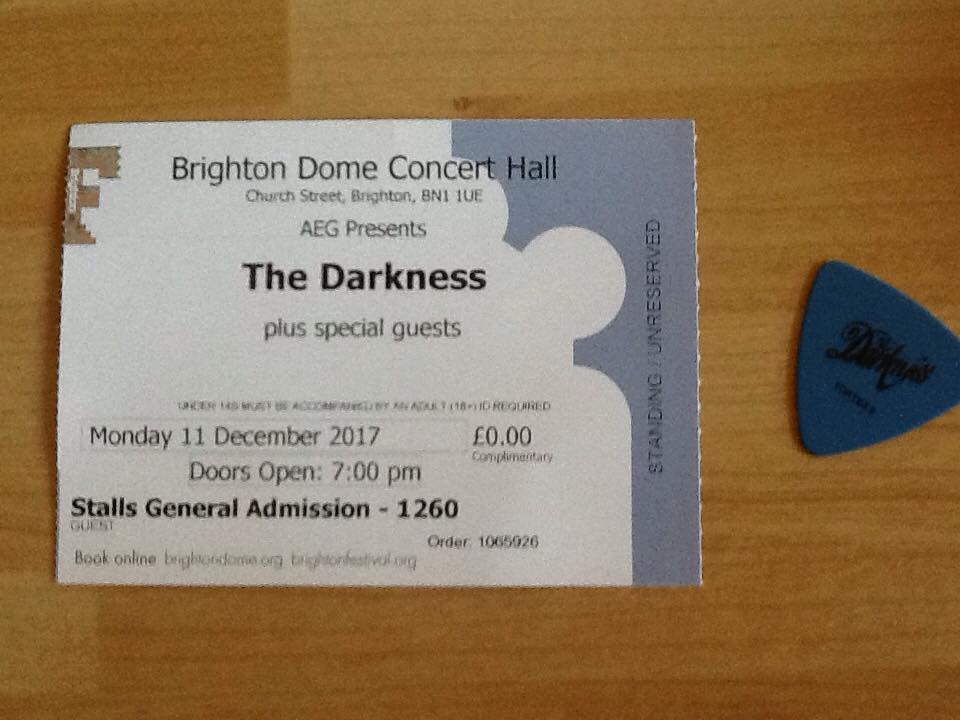 Managed to get a plectrum to go with my ticket!