Toys R Us jobs saved as creditors agree a lifeline

Toys R Us has been saved from almost immediate closure after creditors agreed to give the retailer a three-month lifeline today (Thursday 21 December).

The biggest threat appeared to come from the Pension Protection Fund which wanted commitments to protect current and future pensioners.

With 3,200 jobs at risk, including an unspecified number at the chain’s store in Hove, there was relief today when a company voluntary agreement (CVA) was approved.

The deal was supported by 98 per cent of the company’s British creditors, it said this afternoon.

The company had indicated that it would close about 25 or 26 stores, mostly those based in out-of-town or edge-of-town retail parks.

The Hove branch, at the Goldstone Retail Park, in Old Shoreham Road, Hove, looked relatively safe as one of the most profitable out of more than a hundred stores nationwide.

Toys R Us UK managing director Steve Knights said: “We are pleased to have secured the support of our creditors and will be working closely with them in the months ahead.

“The vote in favour of the CVA represents strong support for our business plan and provides us with the platform we need to transform our business so that we can better serve our customers today and long into the future.

“All of our stores across the UK will remain open for business as normal until spring 2018.

“Customers can continue to shop online and there will be no changes to our returns policies or gift cards across this period.”

As part of the CVA proposal, a number of stores – at least 26 – have been identified for closure. Consultations with staff will start in the new year.

Alvarez and Marsal is the appointed CVA supervisor for Toys R Us UK. It is experienced in handling CVAs – legally binding agreements with creditors such as suppliers or landlords. 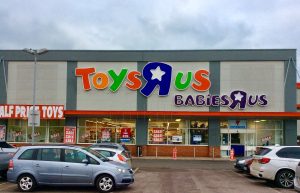 Toys R Us is hoping to negotiate reduced rents for the same premises or if necessary for a reduced floorspace at existing locations. It could also move some stores to cheaper locations.

The CVA buys time for these negotiations as an alternative to going into administration, receivership or liquidation.

A former Goldstone neighbour JJB Sports entered into a CVA, as did BHS (British Home Stores), but ultimately the directors and supervisors were unable to save either business.