The “Armada” beacon on Hove seafront has been relit for the first time in nearly 30 years.

The beacon – by the Lagoon on Hove seafront – had last been lit in 1988 commemorate the 400th anniversary of the Spanish Armada of 1588.

Councillor Robert Nemeth and fellow campaigners now want the memorial beacon to be lit every night – this time with modern LEDs.

When Councillor Nemeth and his fellow Wish Ward representative Councillor Garry Peltzer Dunn called for volunteers to support their proposal to light Hove’s seafront beacon annually, they had no idea where the idea would take them.

When their call was answered by Wish resident Eleni Shiarlis, a professional lighting designer, the project took on a whole new twist.

Ms Shiarlis proposed that the beacon be lit with LEDs rather than fire, and created a low-energy prototype light to make the point.

The light has now been tested with the help of local residents Dan Boorman and David Flack, who provided ladders and a generator respectively – with phenomenal results, Councillor Nemeth said.

He said: “Rather than a dark silhouette, the promenade is now graced with a proud structure that is befitting to its extraordinary history.

“The original beacon was part of a network of structures that was used as a defence network against invasion. 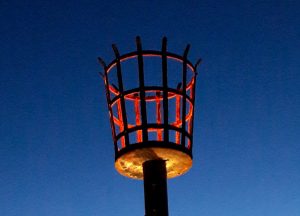 The positive reaction from local residents to the pictures has prompted the two councillors to take the project further with a view to making the nightly lighting of the beacon a permanent feature of the seafront’s integrated light network.

Councillor Nemeth said: “Former Councillor Audrey Buttimer inspired Garry and me to see what we could do to make full use of one of Hove’s lesser-known historic landmarks.

“We are delighted with the results and pledge to adopt this project as one of our priorities for the year ahead.”

Eleni Shiarlis said: “The Hove beacon is an often overlooked local landmark but I have fond memories of it as a young girl growing up in the area.

“I still remember seeing the beacon lit up to celebrate the 400th anniversary of the defeat of the Spanish Armada, complete with cannon salutes and a marching band.

“With a little imagination and some clever lighting effects we can bring this flickering seafront beacon back to life at night.

“The mock-up that we did in December once again demonstrated the transformative power of light and how an intelligent lighting scheme can create a welcoming glow and warmth to the local area.”