Health chiefs in Brighton and Hove have been raising awareness of the symptoms of lung cancer in the run up to National No Smoking Day.

Posters have been sent to community groups and publications including the Hollingdean News. 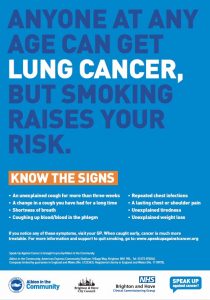 The Hollingdean News said: “As you are probably aware, we do have high smoking rates in the city – higher than the England average and the highest number of smoking 15-year-olds in England.

“You’ll will also be aware that more than 80 per cent of lung cancers are due to smoking.

“If people are diagnosed early, there are more treatment options and much better long-term health outcomes.

“At the moment in Brighton and Hove over half those with lung cancer are diagnosed at a late stage.

“We need to work across the city to change this. Being aware of signs and symptoms that might be a cause for concern is an important step towards this.

“Please share this poster widely and print it out for your display areas.”

National No Smoking Day was originally held on Ash Wednesday but is now on the second Wednesday in March each year – Wednesday 14 March this year.

Brighton and Hove City Council’s Public health team said that it can provide support to help people who are ready to stop smoking in local doctors’ surgeries and at “Healthy Living Pharmacies” throughout the area. 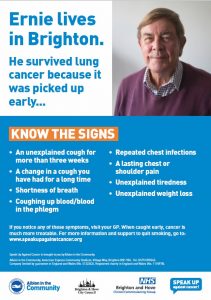 In addition, Albion in the Community – the charitable arm of football club Brighton and Hove Albion – provides free personalised physical activity for people living with and beyond cancer.

The scheme is called Brighter Outlook. It is funded by the Brighton and Hove Clinical Commissioning Group – the CCG – and supported by Macmillan Cancer Support.

The CCG said: “Research has shown that staying active is safe in most cases of cancer.

“The benefits can include less fatigue and improved mood, reduced disease progression and decreased risk of recurrence.”

One patient, Jane Wilkes, praised the project. She was referred to Albion in the Community by her Macmillan nurse at around the same time as she started chemotherapy treatment.

The plan was for AITC’s cancer fitness coaches to support her to stay active during and after treatment.

She is a keen runner and joined the Brighter Outlook running group. Staying active and setting herself running goals during what was a very difficult time of her life were incredibly important. 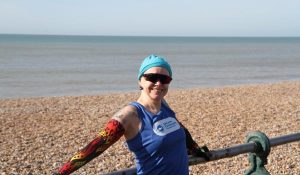 She said: “It’s had a fantastic impact on me. Working with Ros, the Brighter Outlook coach, was great because she knew exactly how much each of us could and couldn’t do and how to pitch the training accordingly.

“It was super-important for me to continue running through treatment because it is what I love doing and what makes me get up in the morning.

“I needed to keep that going as much as possible so that I didn’t lose a sense of the real me which you can do as a cancer patient.

“Having a running goal kept the normality of day-to-day life going amid all the treatments and drugs and hospital visits.”

She and her fellow Brighter Outlook runners successfully completed the BM10k race organised by the Brighton Marathon.

As one of more than 300 people to benefit from the project, she said: “I would recommend Brighter Outlook to anyone who has the chance to access it.