Brighton and Hove Albion defender Gaetan Bong has signed a one-year contract extension – keeping him with the Seagulls until the end of June 2019. 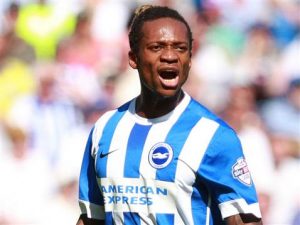 Albion said: “The left-back, who has made 52 league appearances for the club – including 15 in the Premier League during the current season – joined Albion from Wigan Athletic in the summer of 2015.

“Bong has impressed since arriving on the south coast, helping Albion to a third and second-placed finish in the Championship in his first two seasons at the club.

“And he has successfully made the transition from the Championship to the Premier League.”

Chris Hughton said: “I am delighted for Gaetan. He is a key member of the squad, and he has worked really hard to earn this new contract with the club.

“He has proved himself to be a consistent performer for us in the Premier League so far this season and acquitted himself really well stepping up from the Championship.”

Bong began his career in France with Metz and also played for French side Valenciennes, before moving to Greece in 2013 to join Olympiakos.

He has made 13 appearances for Cameroon, and has represented former club Olympiakos in the Champions League, where he also won the Greek league title in 2014.