Brighton students were given a talk by a whistleblower who exposed Britain’s biggest child sex abuse scandal. 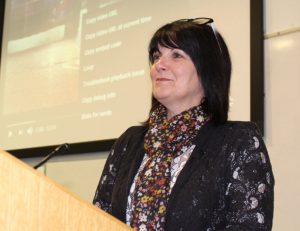 Speaking in Falmer, youth worker Jayne Senior called for more education and training to spot the early signs of abuse.

Mrs Senior, who revealed how 1,400 children had been abused in Rotherham, shared her experience with Brighton University students who are working with children and young people.

She said: “We must all work together to ensure nothing like this ever happens again. We need more education and training … to look for the signs.”

Everyone in schools, she said, should receive more training “from teachers to dinner ladies”.

Mrs Senior was speaking as part of the “Safeguarding and Promoting Welfare and Wellbeing” module on the part-time undergraduate work-based learning programme.

As a youth worker with Rotherham’s Risky Business programme, she tried in vain to help child victims and passed on information to the authorities, hoping they would take action.

But all that happened, she said, was that “they closed us down”.

Mrs Senior, made an MBE in 2016 for services to child protection, said “no one believed the children”.

She revealed, through The Times newspaper, a pattern of exploitation that saw children and young people groomed, gang raped and tortured by groups of men in Rotherham.

The articles by reporter Andrew Norfolk led to a public inquiry by Alexis Jay and a number of criminal investigations.

Rotherham, she told the students, was a “quiet little town” but became “the most infamous town in the whole world”. But it is not alone when it comes to child sexual exploitation.

Mrs Senior said: “There are 73 live investigations going on now – in your town or in towns near to where you are.”

Mrs Senior was warned that she could be jailed for disclosing information. And she became a target for trolling.

She was the subject of a criminal investigation and subsequently cleared. And she suffered emotional upset in her crusade to expose the truth.

So would she do it again? Without hesitation, she said: “I would.”

Principal lecturer at Brighton University’s School of Education, Jane Melvin, said: “We were delighted Jayne was able to join us to talk about her experience as a practitioner in Rotherham.

Mrs Senior is the author of Broken and Betrayed: The true story of the Rotherham abuse scandal by the woman who fought to expose it (2016).