Sussex University boosts the local economy by £343 million a year and supports more than 5,000 jobs in the area, according to a new report. 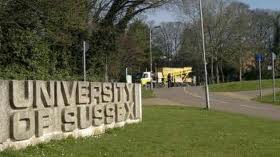 The report was produced by the independent analysts Oxford Economics after being commissioned by the university to gauge its economic and social impact on the region and the wider national economy.

It added that for every £1 million directly contributed to GDP by the university, a further £1.3 million is supported elsewhere in the UK economy.

The university supported 5,180 jobs across the region and generated £74.9 million in tax revenues, enough to pay the running costs for East Sussex Fire Authority for almost two years.

Meanwhile, the university’s significant social impact, the report said, was driven by its world-leading research, highly skilled graduates and civic-minded staff, as well as a strong commitment to social mobility and business innovation.

Sussex University vice-chancellor Adam Tickell said: “This report shows we are a regional economic powerhouse with a hugely important role in the social and economic success of our surrounding areas.

“Our impact is felt both directly and through a powerful ripple-like effect that stretches across the region and covers the length and breadth of the country.”

Pro-vice-chancellor for research Michael Davies, who chairs Sussex Innovation, the university’s business incubator, and is a member of the Greater Brighton Economic Board, said: “Universities are so much more than places of learning.

“As this report shows, highly engaged universities such as Sussex are catalysts for economic growth and social progress on a huge scale.”

The report, The Economic and Social Impact of the University of Sussex, is published on the university website.

While the greatest impact was on the local and regional economies, the report said that the university’s “economic footprint” was nationwide.

It added £407 million to the UK economy, supporting 6,200 jobs and generating £100 million in tax receipts.

Oxford Economics drew on data from the financial year 2015-16 for the report. It found that