A group of travellers defied the ban on seafront camps brought in by Brighton and Hove City Council. 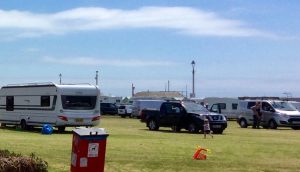 The council said: “We are aware that an unauthorised traveller encampment has set up on land adacent to the King Alfred on Hove Lawns.

“We have visited this site with the police and the group has been informed that they are trespassing on council-owned land and have to leave.

“We are currently working with the police to get this encampment moved on as swiftly as possible.”

At lunchtime today (Monday 18 June) the camp, made up of dozens of vehicles, remained on the lawns.

There was no sign of a police or council presence although one neighbour said that some vehicles had left during the morning.

Councillor Andrew Wealls said: “I really fail to understand why the council have allowed this to persist since Friday last week.

“The area is designated under a public space protection order, so the travellers have committed a criminal offence by camping there. The lack of action sends out entirely the wrong message.

“Perhaps the council can explain why we bothered with a PSPO in the first place if this is allowed to happen.”

The council brought in the ban on seafront camps from the start of 2017 with a public space protection order (PSPO) which lasts for three years.

Breach of a PSPO is a criminal offence under the Anti-Social Behaviour, Crime and Policing Act.

The order covered 12 locations in Brighton and Hove, including the seafront from Black Rock to Hove Lagoon.

Stanmer Park, Preston Park, Waterhall and Wild Park are among the other areas covered by the order.

The PSPO was brought in after 12 permanent pitches for gypsies and travellers were opened in St Michael’s Way, Horsdean, in the summer of 2016, alongside 21 transit pitches.

The £2.3 million project to build the permanent pitches was supported with £1.7 million of government funding. 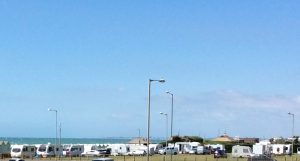 The council said at the time that it would make it easier for the council and Sussex Police to move on unauthorised camps.

The travellers page on the council website says: “Nomadic life is not illegal and travellers have a basic right to this way of life.

“The council recognises that this has to be balanced with the rights of the general public to enjoy private and public land.”

The most recent update on camps in the area, published by the council, said: “An unauthorised encampment of van dwellers is on land at Coldean Woods.

“We will be seeking possession of this land through the county court which, once granted, will enable us to arrange for an eviction to be carried out.”