Patients were left in pain because a care home in Hove ran out of medicines, blamed partly on its reliance on agency nurses.

Official inspectors said that Lindridge, in Laburnum Avenue, Hove, required improvement – the third year in a row that it had received the same rating from the Care Quality Commission (CQC).

Inspectors said: “People were not always supported to receive their medicines when they needed them.

“Systems had not always ensured that there were sufficient medicines in stock to meet people’s needs.

“Records were not always accurate and complete. This meant that the registered manager could not be assured that people were receiving their medicines as prescribed. This was a continued breach of the regulations.

“Staff told us that people’s medicines were not always available. One staff member said, ‘There have been some problems with the pharmacy but it’s sorted now.’

“Another staff member told us, ‘Sometimes medicines have run out and we have to order some in quickly.’

“A third staff member said, ‘Everyone who gives the medicine should check and report it when tablets are low. Because there is lots of agency staff, this doesn’t always happen.’

“Another person was also prescribed a medicine for pain relief and (their) chart identified that they had not been offered their medicine as there was ‘no stock’.

“Staff had taken action to obtain a supply but not until it was noticed that the stock had run out.”

While staffing levels were consistently good, the CQC said: “Records showed that there was a high percentage of agency staff being used to cover shifts. 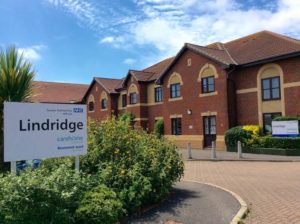 The rehab service has since closed. It had been set up under a short-term contract to help cope with the soaring number of patients arriving at the Royal Sussex County Hospital in Brighton.

Even when Sussex Partnership Foundation Trust, which runs Lindridge, relied on agency staff at the home, it tried to ensure as much continuity of care as possible by having regulars sent along.

The NHS trust has run a recruiting campaign to try to address staff shortages which are affecting most parts of the health service locally.

The trust took over Lindridge in 2011 when it was known as the Downs nursing home, formerly the Downs Christian Nursing Home.

It was part of Southern Cross, Britain’s biggest nursing and care home owner, which went bust.

In its official report, published on Friday 20 July, the CQC said: “Management systems and processes were not always effective in identifying shortfalls in practice.

“Governance arrangements were not clear in all areas of the home.

“Improvements had not been sustained and embedded within practice. This was a breach of the regulations.”

But the report added: “People told us they were happy living at Lindridge.

“Staff received the training and support they needed to be effective in their roles.

“Assessments were in place to identify people’s needs and choices.

“People and their families were involved in making decisions about the care provided.

“People and their relatives spoke highly of the caring nature of the staff.”

The inspection took place at the care home in Hangleton over two days – Tuesday 22 May and Wednesday 23 May.

The report said: “At the previous inspection on (Thursday) 22 June 2017 we identified that some people who were living with dementia, were receiving their medicines covertly, that is without their knowledge.

“Records did not show that a mental capacity assessment had been undertaken and there was no documentation to confirm that the decision to administer medicines covertly was in the person’s best interest.

“At this inspection improvements had been made and records confirmed that when people needed to have their medicines administered covertly this was in line with the Mental Capacity Act 2005.”

The CQC said: “Lindridge is a large residential care home providing care and support to up to 75 people.”

It includes “a specialist unit in two areas of the home for people who were living with dementia”.

When the inspection took place, there were 54 people living at the home, run by registered manager Anne Morris.

The CQC rated Lindridge good – the second highest grade out of four – for providing caring, effective and responsive care.

But it was rated as requiring improvement – the second lowest grade – for being safe and well led.

Sussex Partnership has improved its rating as a trust over the past couple of years and since January has been graded as good overall.

The trust said: “We welcome the CQC’s report on Lindridge care home and are addressing the areas for action they identified as a matter of priority.

“The CQC noted the changes we have made since their last inspection of Lindridge and they received positive feedback from residents and their families about the care we provide within the care home.

“We recognise the need to improve some of our systems and process, particularly in relation to medicines management, and have taken immediate steps to address this.”

Sussex Partnership Chief Nurse Diane Hull, said: “I am pleased residents feel cared for and looked after by staff at Lindridge. Residents spoke positively to the CQC about being supported to remain as independent as possible and feeling treated with kindness and respect. At the same time, staff spoke about the importance of involving residents and their families in decisions about care.

“This is positive feedback we can build upon as we respond to the CQC’s feedback, continue to improve the service at Lindridge and make absolutely sure we have the right systems and procedures in place to support the vulnerable people under our care and their families.”

The trust said: “Actions taken to address the CQC’s feedback includes
• Recruiting nurses to the team to reduce the use of agency staff
• Introducing daily medicine stock checks at each shift handover, which ensures that medicines are reordered when less than four days’ supply remains
• Ensuring all new residents are admitted with a minimum of one weeks’ supply of their medication and their requirements are added to the daily medicine check to maintain adequate stock
• Providing medication refresher training to qualified staff

“Sussex Partnership took over the running of Lindridge, previously the Downs Nursing Home, in 2011 after identifying a community need for a care home offering short and long-term stays for people with complex conditions and dementia.”