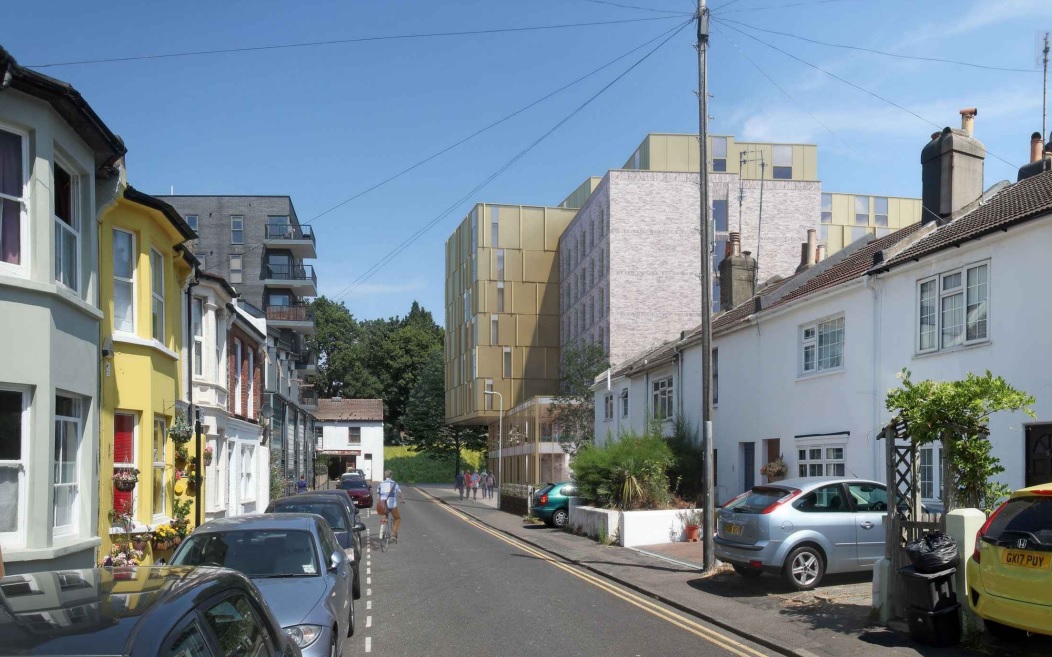 Plans for a block of 350 student flats off the Lewes Road have already attracted a clutch of objections from residents just days after being submitted.

Developers Vita want to knock down the old six-storey Enterprise Point building and replace it with a nine-storey block containing 350 studio flats for students, 20 affordable homes and offices on the ground floor.

It held a public consultation before the plans were formally submitted, and in its application says that the “vast majority” of residents said the development would be an improvement on the disused office block.

However, of the nine public comments already submitted, just one supports the application and ward councillor Dick Page has also written a letter of objection.

Cllr Page said: “I must object in the strongest possible terms . . . In February a developer was canvassing us about approximately 87 student units on this site. Now it has grown to 350.

“This neighbourhood has an excess of HMOs already and purpose built student blocks similarly contribute to an imbalance in the local population, with temporary residents who are more likely to cause late night noise and nuisance.

“There are a number of other blocks in the immediate vicinity on the Lewes Road, not to mention the massive Preston Barracks student accommodation in construction, some 5-600 metres to the north.

“In addition the development replaces the big small business block of Enterprise Point with just one ground floor of ‘office space’ and at nine floors may be too high and overbearing.

“If we have to accommodate more and more students off-campus, I see no reason why blocks cannot be dispersed away from the ‘academic corridor’ to places like Woodingdean, East Brighton and Hove, which mostly have (or could easily have) good transport links to the universities.

“To grant this massive addition in student numbers would clearly tell settled residents that the council does not care about their wellbeing, community or primary schools.”

In its application, Vita said: “The vast majority of local people fed back that this proposed redevelopment will be an improvement to the existing Enterprise Point.

“Whilst there was some concern raised about having more students in the area, there was a positive response to delivering properly managed student accommodation, with 24/7 staffing and the likelihood of overseas students being residents.

“There was also support for the affordable homes being offered on site. There was enthusiasm for the improved design of the site compared to the previously approved scheme, with enhanced architectural details, stepped design and emphasis made to the active frontages of the block.

“The main concerns about the proposals centred on the increased demand for car parking on neighbouring streets, the impact of increased residents in the area on congestion and services.”

The application did not state how many people had attended the public consultation, which was held on the afternoon of 12 July at the URC Church Hall.

Vita is the latest in a clutch of large student housing blocks to be developed along the Lewes Road. Others include three blocks (one completed, two approved) at the Vogue Gyratory, the huge Preston Barracks scheme, and the earmarking of part of the Lewes Road bus depot for at least 250 flats in the draft city plan, published earlier this year.

Enterprise Point was previously home to the popular Access to Music music college, which closed in summer 2016.