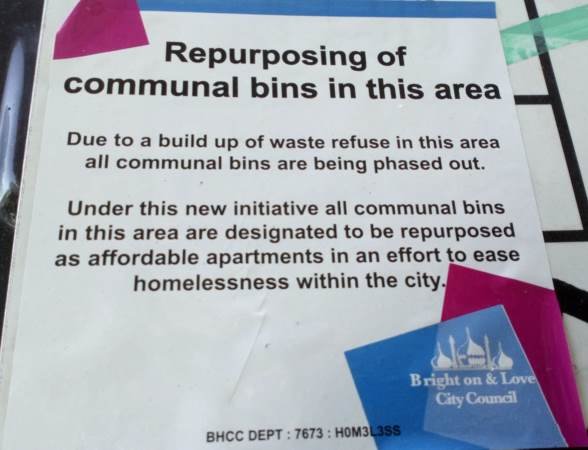 Fake council posters announcing that communal bins will be converted into apartments for rough sleepers have been condemned as vandalism by the city council.

Brighton and Hove City Council tweeted this evening to warn people to ignore the “totally false” posters, which are similar to others announcing that the Level is a “designated cannabis zone” put up in June.

The poster pictured, which bears a council logo with the words “Brighton and Love Council” was found in Pelham Square. Others have been found and the council believes they have now all been removed.

In 2016, rough sleeper Henryk Piotrowski was crushed to death by a rubbish truck after sleeping in a bin in Dublin which was taken by unsuspecting refuse collectors.

The incident was a horrible echo of the 2009 death of teacher Scott Williams, who is thought to have climbed into a bin in Brighton to sleep after a night out.

The city council tweeted: “Please be aware, if you see these posters anywhere in the city ignore them. They are totally false, have been posted by vandals and have got nothing to do with the council whatsoever.”