Changes to plans for new homes on the site of a former Brighton laundry have provoked opposition from neighbours.

Now a proposal to change the original internal layout – from two-bedroom homes to three-bedroom homes – is due to go before Brighton and Hove City Council Planning Committee next Wednesday (7 November).

Neighbours have sent 24 letters of objection raising concerns about overlooking, overdevelopment and noise. They said that changes were made before permission has been granted.

Crescent Road residents Elizabeth and James Miles are concerned about changes to windows and an extra bedroom in the new layouts.

In their objection letter they said: “In total there is an increase in four bedrooms over the site. In our eyes this is overdevelopment.

“This has implications to the level of noise in a previously quiet area. It will also increase the amount of cars that will be coming and going and parking in Crescent Road.”

Zoe Cutting, who lives in Belton Road, which backs on to the site, is concerned about extra bedrooms, changes to the design and smells from bin stores.

She said: “The number of bedrooms on the site have increased by four which will result in even more disturbance, overlooking and loss of privacy for existing residents as a greater number or people will now access the site mere yards from windows and adjacent to gardens.

“Along with this is the added generation of rubbish and recycling on this plot which has very limited access to the public road.”

The Conservation Advisory Group, which is represented on the Planning Committee, also opposes the project, describing it as an overdevelopment of the site in the Round Hill conservation area.

St Peter’s and North Laine councillor Pete West, a Green, asked the council Planning Enforcement Team to check that windows complied with the existing planning permission after receiving “messages of concern” from neighbours. 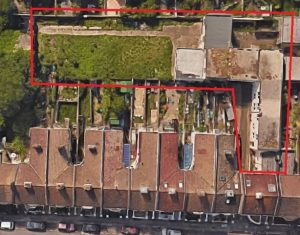 Julia Mitchell, a planner at agent Stiles Harold Williams, sent a statement to the council in July aimed at addressing people’s concerns.

She said that the amendments were to remove two windows which would reduce overlooking and all other windows above the ground floor were already approved.

Regarding the increased number of bedrooms she said: “Any increase in residents as a result of the additional bedroom in each unit will result in a negligible increase in activity at the site compared to the approved development.”

She said that the council’s City Plan Part One said that 36 per cent of housing needs to be three-bedroom.

Officials have recommended that councillors approve the application to amend the plans.

The scheme is due to be discussed by the council’s Planning Committee at a meeting at Hove Town Hall next Wednesday (7 November).

The meeting should start at 2pm and is expected to take place in public.