I’m on my way back to England after visiting Auschwitz, the Nazi death camp where over a million innocent people were murdered during the Second World War. I was asked to join 220 students from the south east of England under the stewardship of the Holocaust Educational Trust. 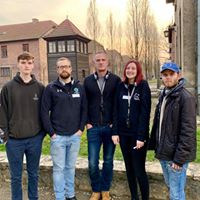 Last night we had late votes in the Commons so I set off at 2.30 this morning after a couple of hours sleep to meet the students and our guides at Gatwick Airport.

All 220 students were there by 5am and even arrived early. Being early for a 5am meeting shows just how dedicated these amazing youngsters are – and just how seriously they take the responsibility of witnessing this place and understanding the reasons behind the darkest episode of humanity.

Loads of the students told me they were looking forward to it then suddenly stopped after realising the contradiction between being excited to see something so awful. But I told them I was excited too. We were there to learn and there is nothing to be embarrassed about looking forward to learning about something.

In my case I was also looking forward to spending time learning alongside students from three of our local schools – the Portslade Aldridge Community Academy (PACA), Brighton, Hove and Sussex VI Form College (BHASVIC) and Cardinal Newman Catholic School.

The students had already been learning about the history and background to the holocaust before the trip. The trust is remarkable in the way they prepare people for the visit and guide them through the experience in a sensitive way.

But there’s no way to sugarcoat the brutality of the place, even after all this time has passed. The industrial nature of the murder, the planning, the thought that went into the execution and phycology of what unfolded there are frankly overwhelming.

And the sheer scale is unimaginable. None of us can imagine what a million deaths looks like even when we’re in the place where they happened. But one moment gave me a glimpse.

We entered a room containing 80,000 pairs of shoes in two giant heaps. They were removed from people just before they were murdered in the two giant gas chambers. This was shocking enough but when our guide told us these shoes were from people killed just in the last four days of the camp’s operation – the rest had already been shipped off to Germany as part of regular shipments – then you glimpse, for one breathtaking moment, the true scale of horror that unfolded there.

By the time we’d toured two Auschwitz sites the sun had set and we were left in darkness. All of us gathered in the centre with those dreaded train tracks running forward and through the iconic Auschwitz-Birkenau front building.

We had a service in the darkness where students read poetry and messages from victims who had written notes and buried them in the hope they would one day be discovered and their suffering recognised. These were tough passages to read but the students did so brilliantly.

And then a rabbi sang prayers. I cannot tell you how powerful and emotional this was. We stood rooted to the spot as his voice rang out. The beauty of the singing was amplified by the horrific but unavoidable symbolism that the rabbi’s voice was ricocheting off of the two giant crematoria that were either side of where we stood. It then echoed around the empty huts into the distance.

I had tears running down my cheeks, as did most of us. But there was real power there too. A rabbi singing Jewish prayers in that particular spot seems like the ultimate “two fingers” to the murderers who tried to exterminate the Jewish race. 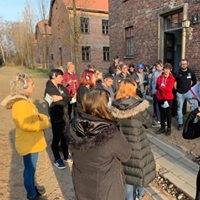 Each of us respond differently to what we see because of our own stories and backgrounds. Personally there were two things that really struck me today.

The first was when we were taken into a room where the uniforms of inmates who’d been murdered were on display. I froze when my eyes were caught by one with a small pink triangle on it. Whoever had worn that mucky old blue-and-white striped uniform had been gassed to death for being gay. If I had been born in another time, another place, it would have been me.

The overwhelming majority of victims were Jewish. But they also had symbols for and gassed to death gay people, political dissidents, Roma, Jehovah’s Witness and Russian prisoners of war. They were coming for everyone by the end, make no mistake about it.

Secondly, after walking around for the whole day I was struck by the simple fact that this is a place made of wood and bricks and mortar like any other. Just because it’s far away and far in the past doesn’t mean it can’t happen again or can’t happen at home. Human beings made this happen, not a place or a time.

The hate that leads to division and victimisation has not been erased. It’s still in humanity, our society and, yes, our politics too. I return from this visit more determined to confront it wherever I see it and to protect those who are targets.

I really can’t tell you how proud I am of our students. They were so thoughtful, so engaged and respectful. I met several who’d never been on a plane before yet here they were in the middle of one of the most complex and harrowing places on earth and displaying all the wisdom and judgement of an expert.

Next week all of the students will gather together again for the final part of the Holocaust Educational Trust course. This is about the future. All the learning coupled with the experience on the visit will be put to use identifying the causes of hate, racism and division and thinking about ways they as individuals can make a difference.

As a result, and thanks to these remarkable young people, I come back from this trip more optimistic than I left. If this lot are a glimpse of what’s in store for us in future generations then we’re in safe hands – I just hope we don’t screw things up too much by the time we hand it over to them!

Have you been to a concentration camp? Please let me know about your experience. And if you haven’t then please think about it. It is tough but important and life-affirming too.