The father of a murdered nine-year-old girl sobbed as he denied killing her and told a jury how he identified her body at the mortuary in Brighton.

Barrie Fellows, 69, shed tears as he denied murdering his daughter Nicola and her friend Karen Hadaway, also nine years old, known as the Babes in the Wood.

Mr Fellows said: “Identifying your daughter’s body … that must be every parent’s worst nightmare.”

He said: “It’s difficult enough talking about it even now. I walked in there and there was a sheet over my little girl up to the neck. You’re not allowed to touch.”

He said that he had 50p for her and asked if he could give his daughter her pocket money for that week before putting the 50p piece into her hand.

At the Central Criminal Court – better known as the Old Bailey – Mr Fellows was also asked whether he was party to Nicola being filmed in a pornographic video.

“No!” he said. And he said “No” again when asked if he had watched a homemade pornographic film featuring his own daughter.

Under cross-examination, Mr Fellows was asked by barrister Joel Bennathan: “Were you anything to do with her death?”

Close to tears, Mr Fellows was more forceful in his response as he again said “No!”

Mr Bennathan is defending former roofer Russell Bishop, 52, who lived in Stephens Road, Hollingdean, and who is standing trial charged with murdering the two girls.

He was tried in 1987 and acquitted by a jury at Lewes Crown Court but, after advances in DNA science brought fresh evidence to light, the verdict was quashed so that unusually he could be tried again.

His barrister told the jury that police and prosecutors had spent 32 years pursuing the wrong man for the murders – in Wild Park, Brighton, in October 1986.

He asked Mr Fellows, formerly of Newick Road, Moulsecoomb, about his alibi, claiming that there was a missing hour.

The retired labourer had left work at a house in Woodruff Avenue, Hove, at 5pm but was said not to have turned up at home until 7.30pm.

Mr Fellows, who was in the witness box for 90 minutes this afternoon, said: “You are trying to mislead me, sir. It’s not happening. I believe them times were correct.”

He denied having gone to Wild Park before going home on Thursday 9 October – the evening of the girls’ death – when their lifeless bodies were left in a hidden “den”.

But he accepted that that he had said to Karen Hadaway’s mother, Michelle Johnson, that her daughter “had been in the wrong place at the wrong time”.

Mr Fellows said: “So had Nicky. They both shouldn’t have been in Wild Park.

“I didn’t like my children going out after dark anyway. They were banned from the park after dark. It isn’t safe – as has been proven.”

He had, he said, told his daughter that the “bogeyman” lived in the park to try to put her off going there after dark.

Brian Altman, prosecuting, said: “What is being suggested, so that nobody is left in any doubt, is you are being accused of having killed Nicola.

“You are being accused of having killed Karen. This is what is being suggested to you – that you sexually assaulted your own daughter and Karen in that den, having punched Nicola in the face. Do you understand that?”

Mr Fellows denied the claims and left court in tears while Mrs Johnson looked on from the back of the court, also in tears. 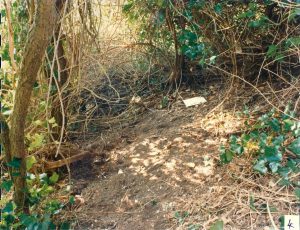 Earlier Mr Fellows was asked about his temper and episodes of violence towards his daughter and his ex-wife’s plain-speaking grandmother.

He had hit his daughter around the head, he admitted, giving her “what was commonly called a thick ear.”

And he threatened to cut her fingers off when she was accused of stealing – a threat that he would never have carried out, he said.

And when he broke his then-wife’s grandmother’s nose, it was an accident, he said, adding: “I don’t deliberately punch older ladies on the nose.”

His lodger at the time, Dougie Judd, had signed on in the morning of Thursday 9 October at “the Labour Exchange” and then spent the day working with Mr Fellows, the jury was told.

But Mr Judd told the jury that claims about him being filmed having sex with Nicola was a lie.

Mr Judd said no, adding that when he first heard the claims, he thought that it was a wind up.

Both Mr Judd and Mr Fellows were interviewed by police in 2009 but no charges were brought.

Mr Altman said: “The allegation is that you were in a video with Nicola either completely naked or semi naked, having sex with Nicola. Is there any truth in it?”

Mr Judd said: “There is no truth in it whatsoever – total lies.”