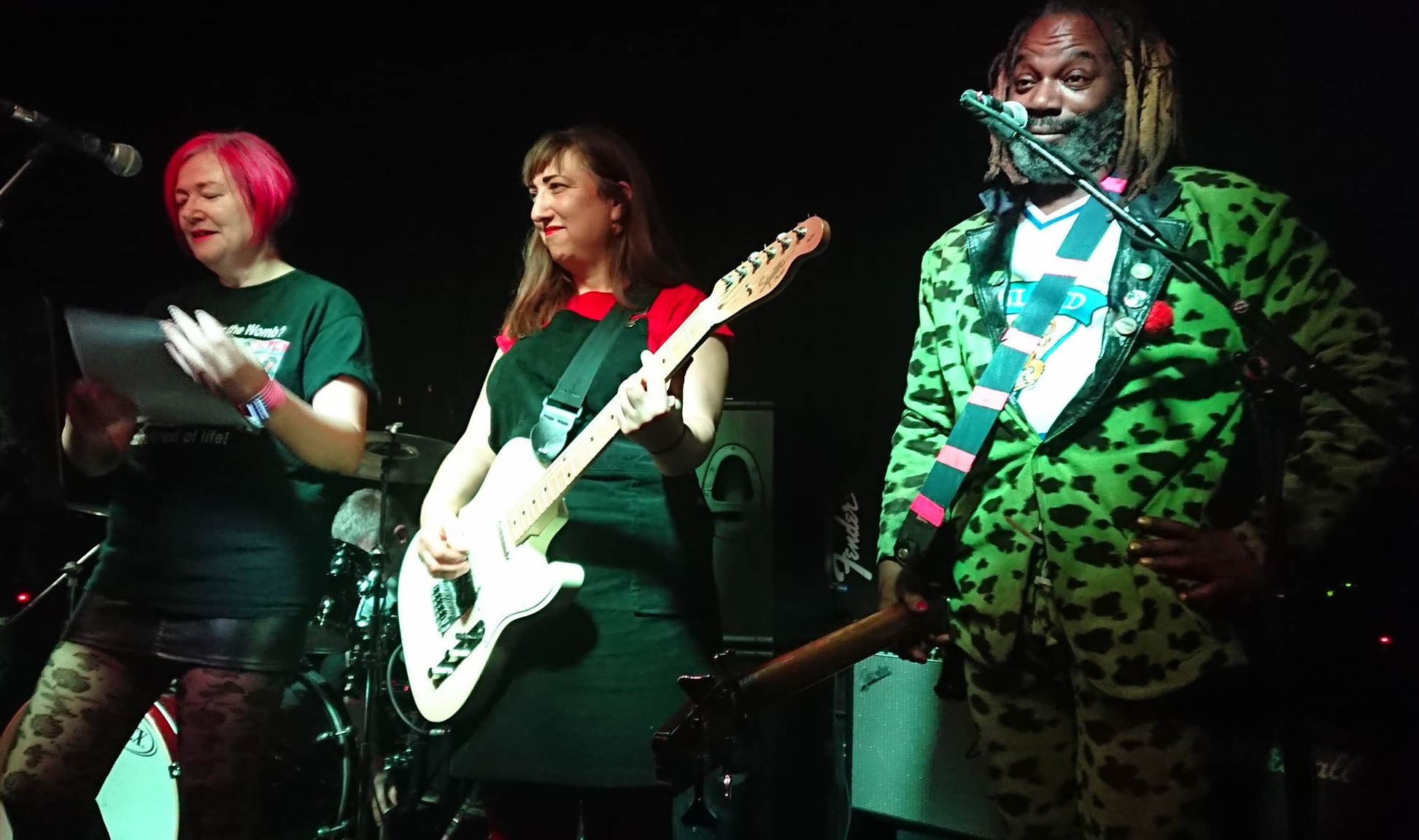 I would never have thought that on a freezing cold night by the seaside in 2019 I’d have the opportunity to reflect on years gone by and to see if much has changed but when I was offered the opportunity to review Hagar The Womb at The Prince Albert it was too good to miss.

The early 1980’s and the first wave of punk had slowed down, but it was far from dead, as a new hardcore element came to the fore with the creation of the Anarcho-Punk scene. With Crass at the forefront, this was punk with a serious anarchist ideology. No manipulation from band managers or the media. No major recording labels were involved and costs were kept to a minimum. ‘DIY not EMI’ was a popular slogan of the time.

The rise of this scene coincided with the Thatcher Government and there was a lot of resentment about how the country was being run at the time. Now fast forward to the present day and there has probably never been a better time for a revival of the Anarcho-Punk scene. Government and Politicians all around the world continue to pull the wool over our eyes and continue to shaft the downtrodden, but nobody seems to know how to fight back at the system. Would I find the answer at tonight’s gig? Theresa May watch out!

Tonight included 5 firsts for me as I had never frequented The Prince Albert and nor had I seen any of the 4 bands playing live. I have to say that it was a great little venue and the sound system could not be faulted for the size of the room. Even though I had seen Crass, Conflict, Flux of Pink Indians, Dirt, Poison Girls, The Mob, Rubella Ballet, etc., back in the eighties, I had somehow missed Hagar the Womb and was excited to see them for the first time some 30+ years late. 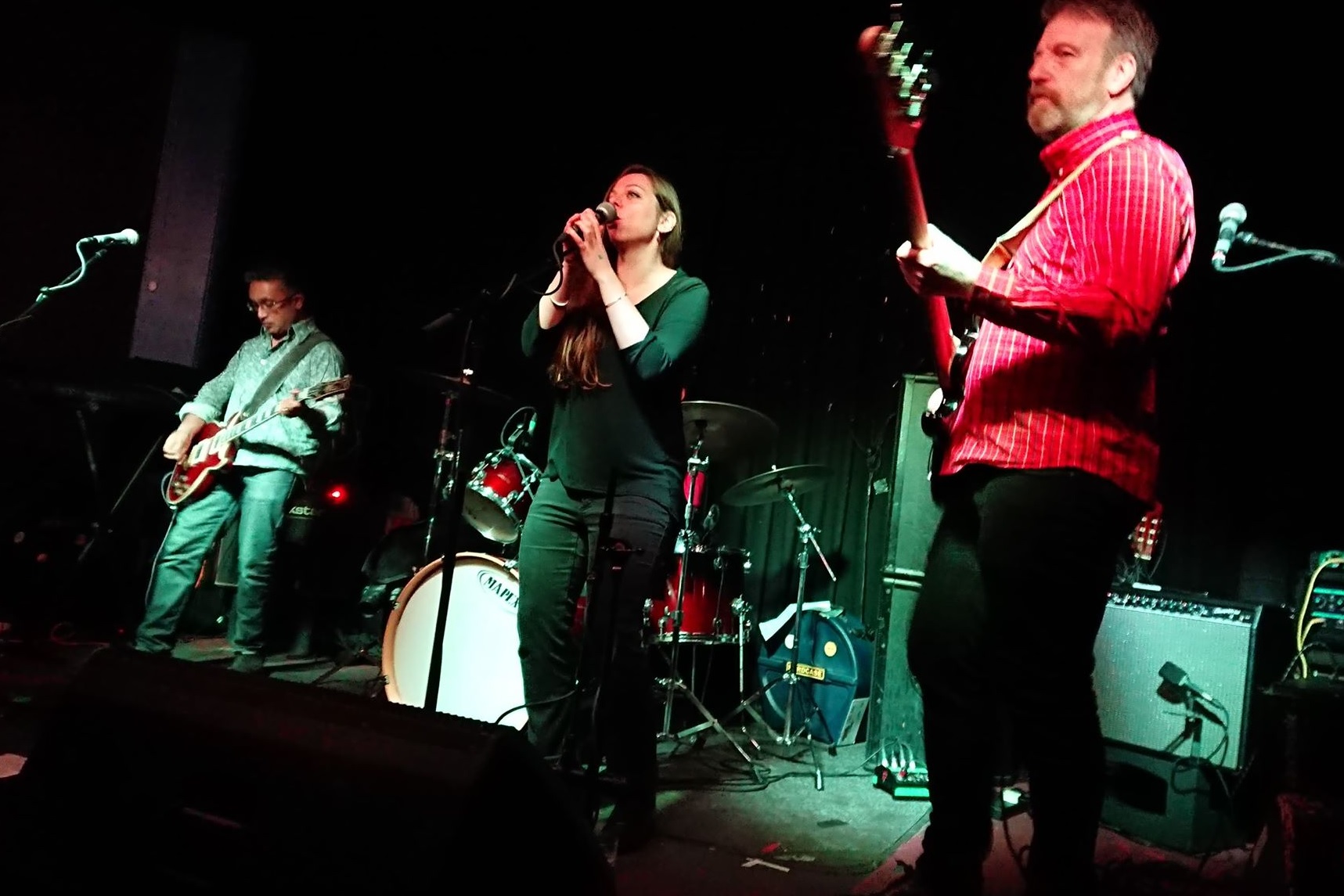 Local Brighton band, The Bone Records were first up on stage and looked slightly nervy early on, maybe concerned about the reaction they would receive from a crowd of anarchists. They needn’t have worried as it didn’t take long for them to put any self-doubt to bed as an appreciative audience took to their mix of indie, post-punk, blues and garage. First up was ‘Joan of Arc’ with Vasco’s vocals for this song having a hint of Kirk Brandon, which caught my attention straight away. They definitely grew into the gig and my personal favourites were ‘Why Don’t You Take The Hint’ and ‘Hate The Poor’, a punchy song with great lyrics made it a fine choice of song to finish off their set. In hindsight my only disappointment is that I didn’t purchase one of their CDs on sale. 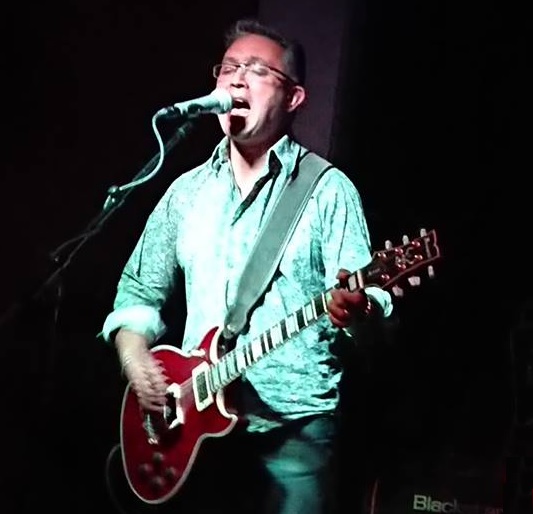 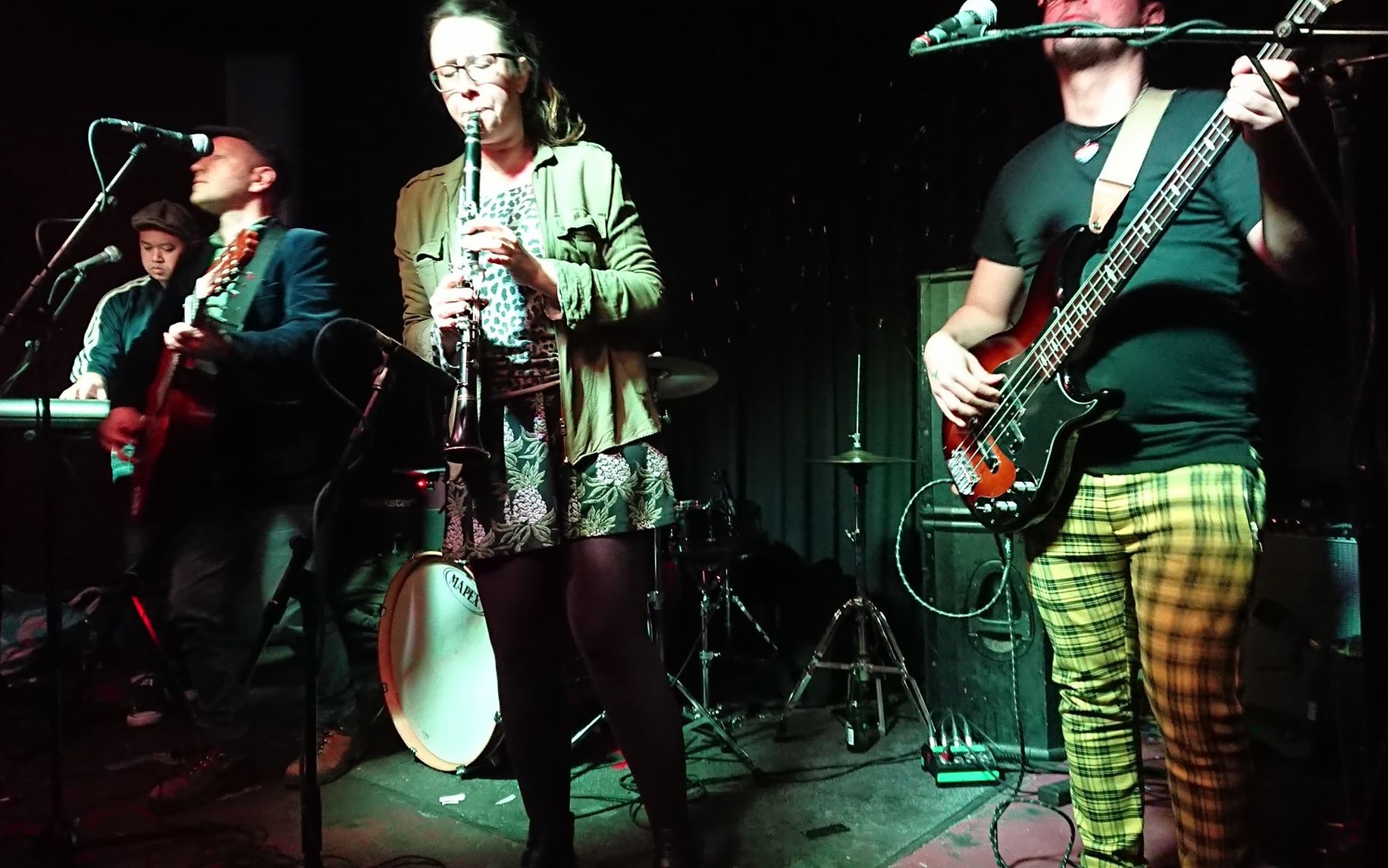 Next up were another local band in Pog, a folk/punk band that set tales of everyday failure to disarmingly catchy acoustic soundtracks. Missing key members due to an unwell vocalist, the violinist being in Rwanda, and currently having nobody to occupy the drumsticks, we were treated to more ballads than usual. Still the way that the band coped was more than admirable as they provided us with an ad hoc set including suggestions from the crowd. 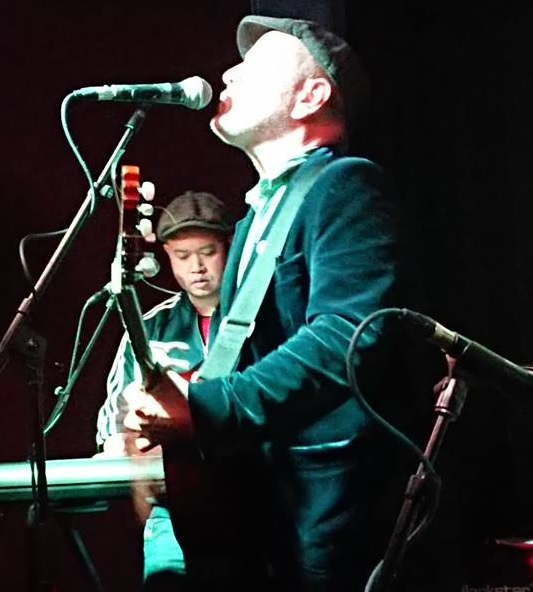 Vocalist Paul’s stage presence and interaction with the crowd, including an advert for new drummer with seven provisos including having a job that you can fall back on and carrying an inhaler around should he forget his, was all part of the Pog experience. They are not scared to sing about subjects which people don’t always feel at ease with including mental health. They are good musicians and lyrically astute, and I should imagine that when at full strength they will be very entertaining. I look forward to catching them again. 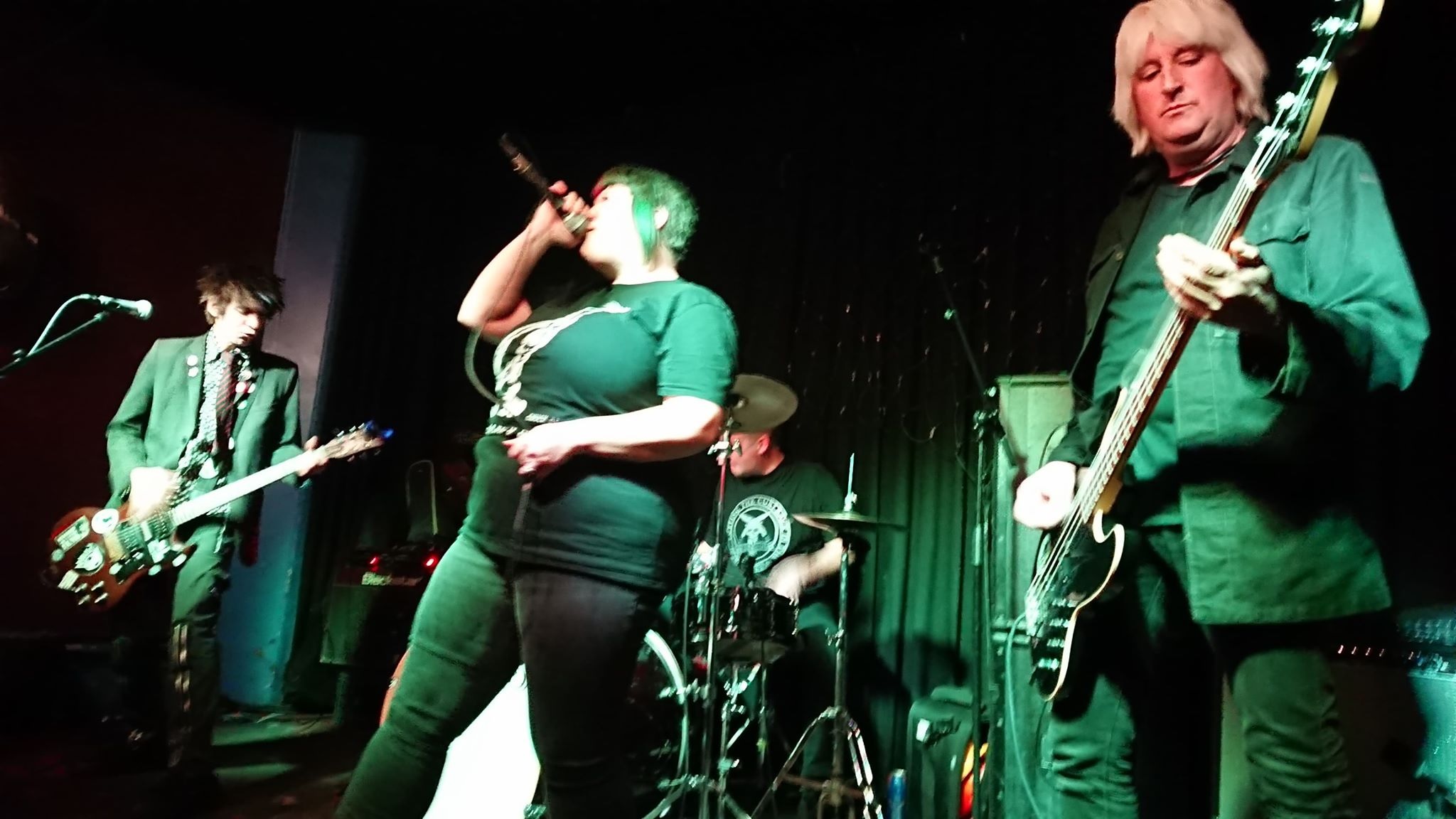 Third on the bill were hardcore punk band Combat Shock, who are local to Brighton since moving down from Cambridgeshire in 2000. After a 10 year break they reformed in 2016 and are now back doing what they enjoy. Lead singer Mel complained of a sore throat prior to the gig and was feeling under the weather. This was not helped when two songs into the set her full pint glass fell over due to the thumping bass guitar. Looking forlorn this could have gone one of two ways but thankfully it spurred her and the band on to complete a relentless set which got the mosh pit going. 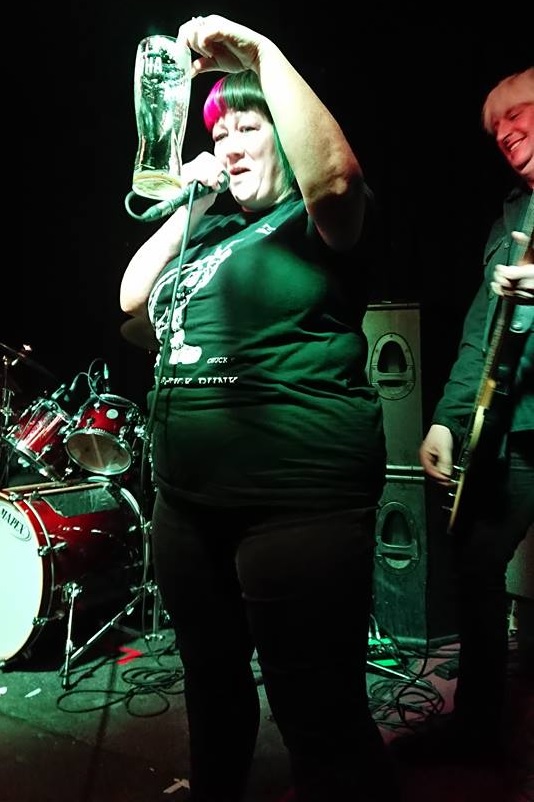 Mel disclosed the interesting fact that she has been a vegetarian for 31 years but she would eat one type of flesh she stormed into ‘Eat a Nazi’. ‘Take The Strain’, is going to be included on a compilation album recorded for International Women’s Day on Grow Your Own Records, so definitely one to keep an eye out for. Mel’s sore throat seemed a distant memory by the end of a great set which had the crowd in the mood for the headline act. 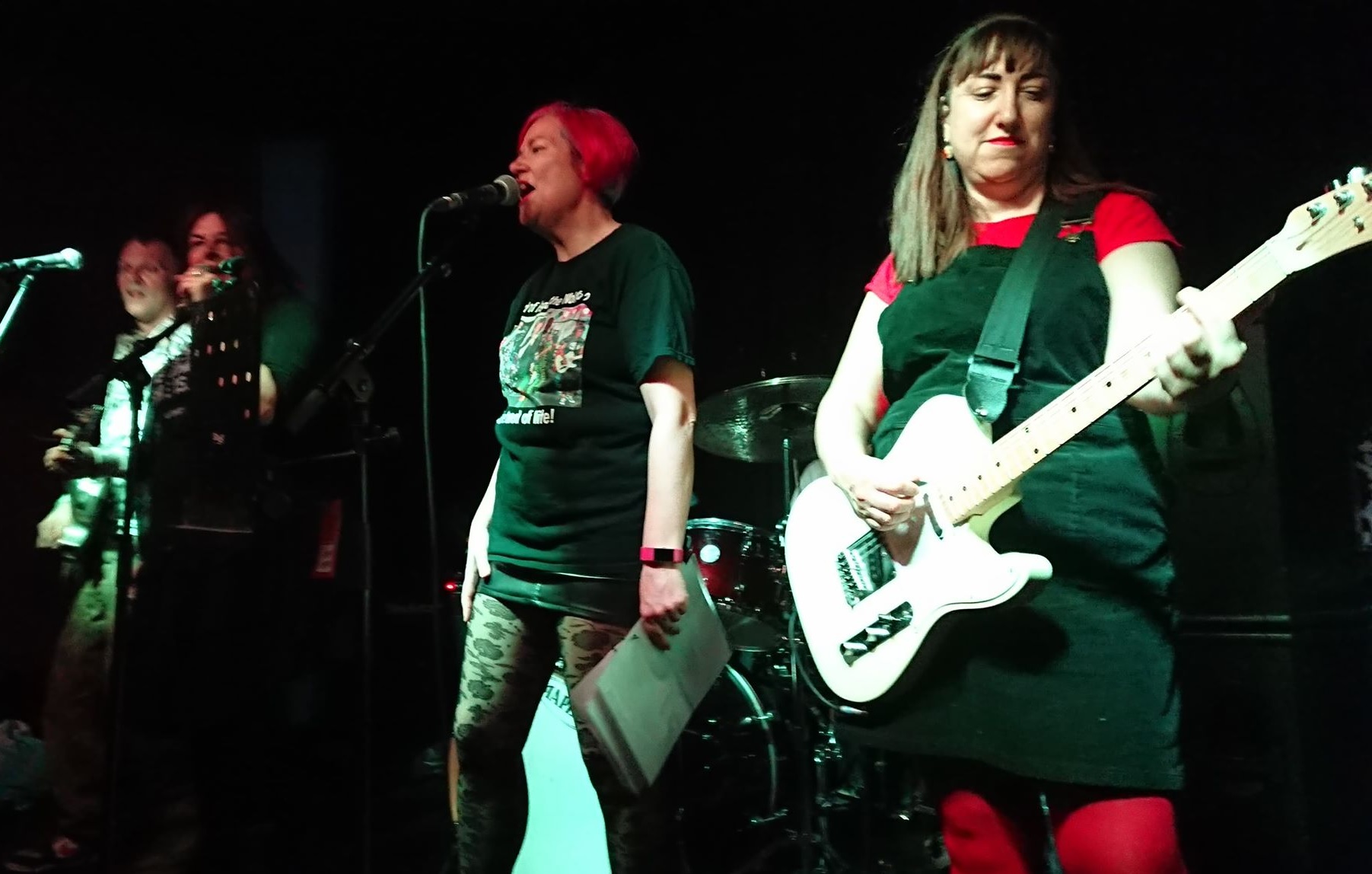 Welcome onstage Hagar The Womb, but hold on where was Ruth? Given that the band was originally formed in the toilets of the Wapping Anarchy Centre, it seemed appropriate that Ruth was rumoured to be powdering her nose, though Karen was a bit more forthright about it. When Ruth did make it back from either the toilet, or as she said ‘making a cup of coffee,’ she gave a heartfelt outpouring about the sad passing away of their friend, Terry Anderson, who would have otherwise been present at the gig. A memorial book was available for anybody to sign and all profits from the gig were donated to Macmillan Cancer Support. Then without further ado it was into the music.

What followed was a cracking set which the crowd acknowledged with the increased mosh pit. Karen was full of energy as if we were back in the eighties, though maybe not in true Anarcho-Punk style she got very excited when her pink Fitbit, to match her hair, hit 15,000 steps. The passion behind the songs though was still there for all to see. They treated us to ‘Idolisation’, ‘What’s Your Flag’, ‘Truth’, and ‘Dressed to Kill’ from their ‘Word Of The Womb’ 12” EP, which was only kept off the top of the Indie Charts in 1984 by The Cure and The Smiths. A new song, ‘Perfect Life’, was well received, but for me the highlight of the set, apart from ‘Idolisation’, had to be ‘Hated By The Daily Mail’, which judging by the mosh pit most people were in agreement. The set finished brilliantly with ‘Waiting’ which is apparently what some of the band had to rush off to do at the train station. 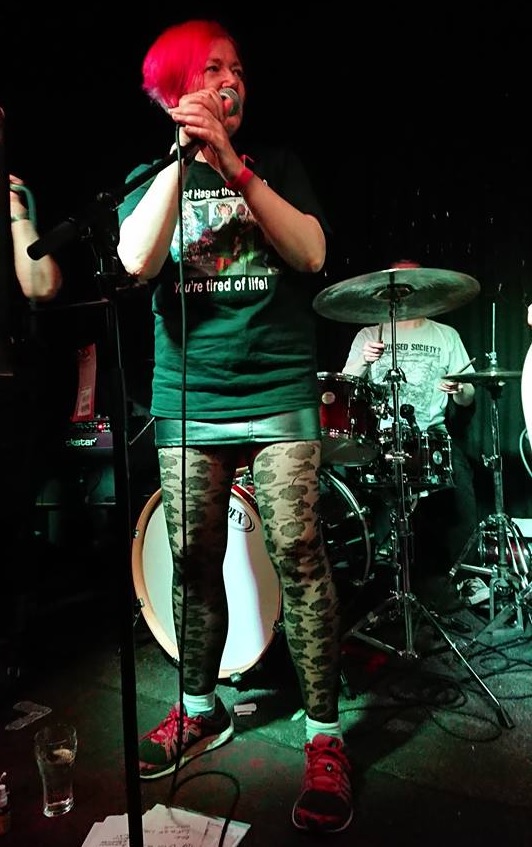 In a nice tribute to their friend Terry, Karen wore a t-shirt which he had designed especially for the band, with the words: “Tired of Hagar The Womb? You’re tired of life!”. After witnessing this gig it is obvious that Terry knew what he was talking about. R.I.P.

I did purchase their ‘Hagiography’ CD afterwards for just £5, proceeds going to Macmillan again, which I would suggest is an essential for anybody of a punk persuasion. I even got the added bonus of getting to listen to all 25 tracks on my 80 minute diversion ridden journey home.

This was a thoroughly enjoyable night and credit must go to the Promoter. Four bands with varying styles might not have worked, but they complimented each other well and the running order was crucial to this.

Maybe music won’t save us from crazed World Leaders, but at least I feel a lot happier having spent my evening with like-minded people who want to try and make a difference. 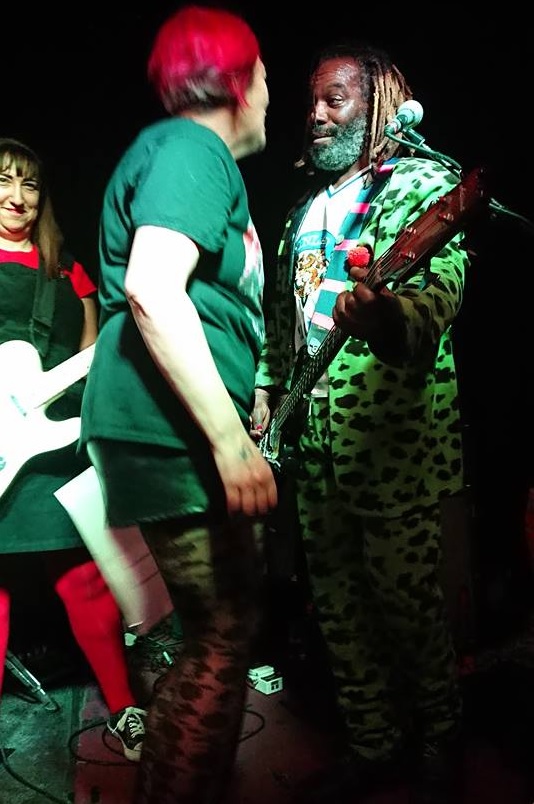 More on Combat Shock HERE and listen to them HERE.

More on Pog HERE and listen to them HERE.

More on The Bone Records HERE and listen to them HERE. 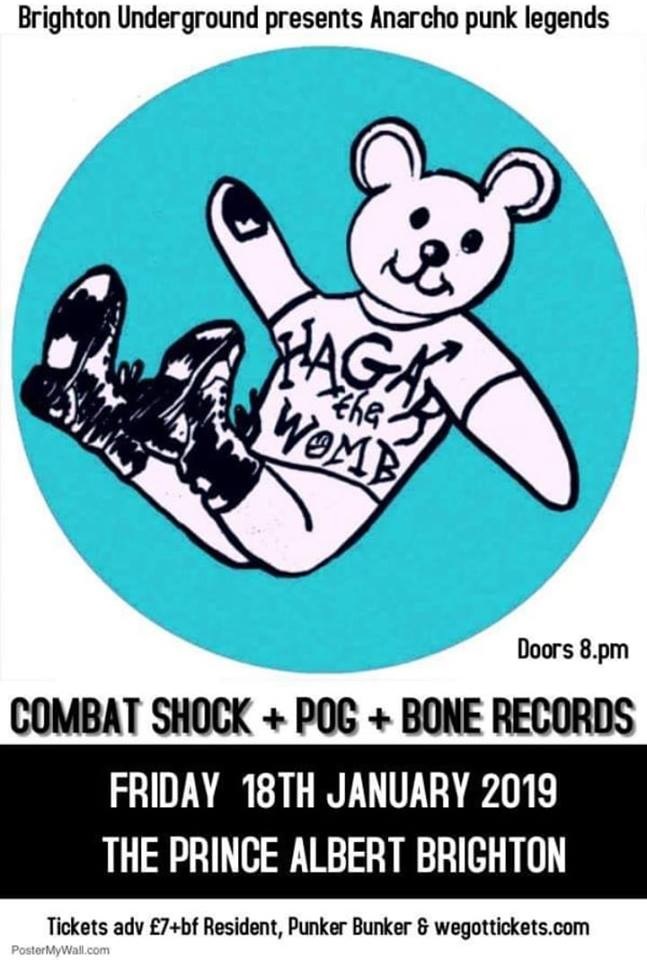 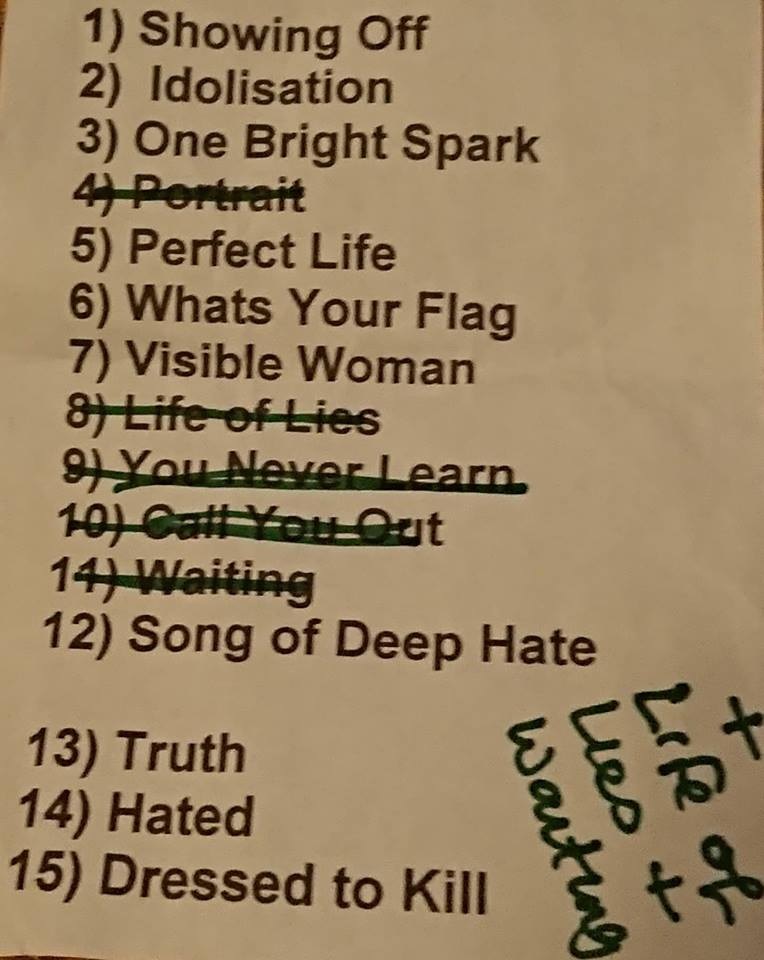 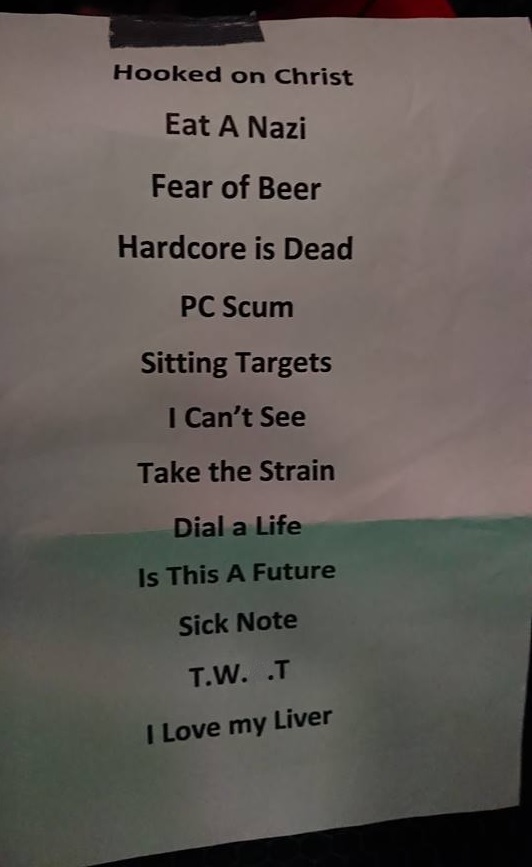 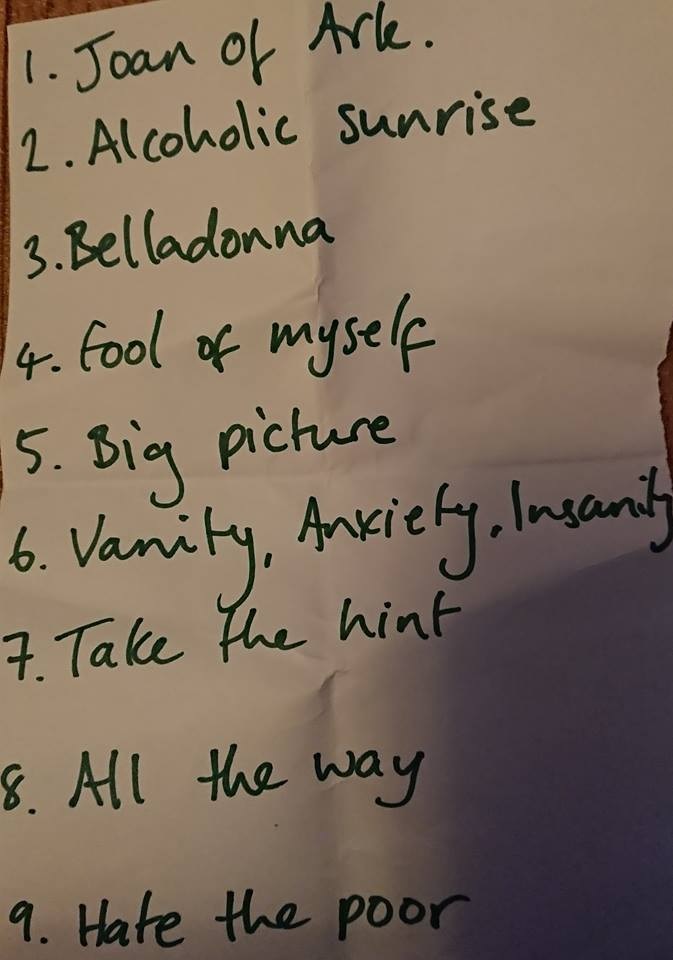