Two heroic police officers went into the sea in Brighton to save the life of a drowning woman in the dark.

PC Lara England and PC Lynsey Burkinshaw found the suicidal woman in the water near the West Pier. She appeared to be unconscious and non-responsive.

Superintendent Ed de la Rue said that the officers went into the water, pulled her out and rescued her and started first aid.

The courageous pair were among dozens of Sussex Police officers and staff and others to be recognised for their bravery, dedication and exceptional investigative skills.

At the Brighton and Hove divisional awards at the Brighton i360 another officer was commended for his courage after a colleague was stabbed.

PC Phil McGrath and his colleague had been checking up on a teenage boy at a house in Hove when the boy stabbed the other officer in the arm.

PC McGrath grabbed the weapon and held the youth, saving his colleague from further attack.

Brighton and Hove police commander Chief Superintendent Lisa Bell said: “Rather than run away, PC McGrath ran towards the young man and disarmed him.

“He saved his colleague from receiving further potentially life-saving injuries. His disregard for his own personal safety to protect his crewmate was brave and fearless.” 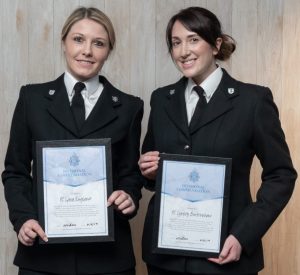 Chief Superintendent Bell said that he directed police officers to where she was lying in undergrowth – and without his help it would not have been possible for them to find her.

He also helped them to carry the woman to a waiting ambulance. His actions were credited with playing a vital role in reuniting her with her family. He was presented with a commendation for his actions.

Detective Sergeant Owen Radley and Detective Constables Darran Newman and Tom Duffy were commended for their work on Operation Highbridge, investigating a serious of sexual offences on women and girls in the city.

Detective Superintendent Jeff Riley said that their determination to secure justice successfully removed a dangerous individual from the community, protecting vulnerable women and girls from his predatory offending.

He said that the case demonstrated the very best example of investigative tenacity.

The High Sheriff of East Sussex John Moore-Bick said thank you in his role as the Queen’s representative in the field of law and justice.

He said that he had had the pleasure of meeting some of the good, decent people who police the area and added: “I know what great efforts you put in to keeping Sussex a safe place.” 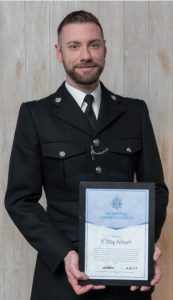 Brighton and Hove Mayor Dee Simson said: “This has been a truly humbling and inspirational ceremony.

“I am in awe of the amount of bravery and dedication that has been shown in so many situations.”

She praised the partnership work between Brighton and Hove City Council and Sussex Police and added: “Thank you all for keeping the people of Brighton and Hove safe. It has been an honour to be part of this ceremony.”

Assistant Chief Constable Nick May told those receiving awards and their family and friends: “This morning there was an armed robbery. Some firearms incidents were resolved last night. There was somebody in custody. People were safe.

“Every night, every single day, partners are out there doing the right thing, working for the community.

“You are decent people doing the right thing, keeping the people of Sussex safe.

“That’s the work that happens every single day. And we’ve recognising some of the exceptional things that have happened.” 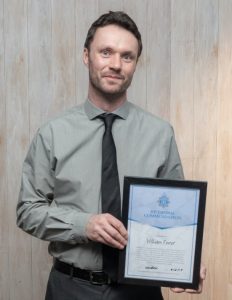 He said that sometimes great work went unrewarded and added: “Take the accolades when you can.”

He said that the commendations could also be seen to recognise the professionalism that was shown every day and the overall career contribution – “and all that you do for the people of Sussex”.

He thanked partners, family and friends – those members of the “wider policing family” – for their understanding and support for the work carried out by police and support staff.

And to those receiving awards, he added: “Be proud of yourselves!”

Chief Superintendent Bell said: “I see the dedication, professionalism and courage with which Brighton and Hove officers and staff police the city on a daily basis.

“This was a chance to see the breadth of policing and active citizenship across the city and recognise those who have gone above and beyond what is expected.

“It is the tireless and selfless efforts of those who have been recognised that keeps our communities in Brighton and Hove safe and secures the trust and confidence of the public.”