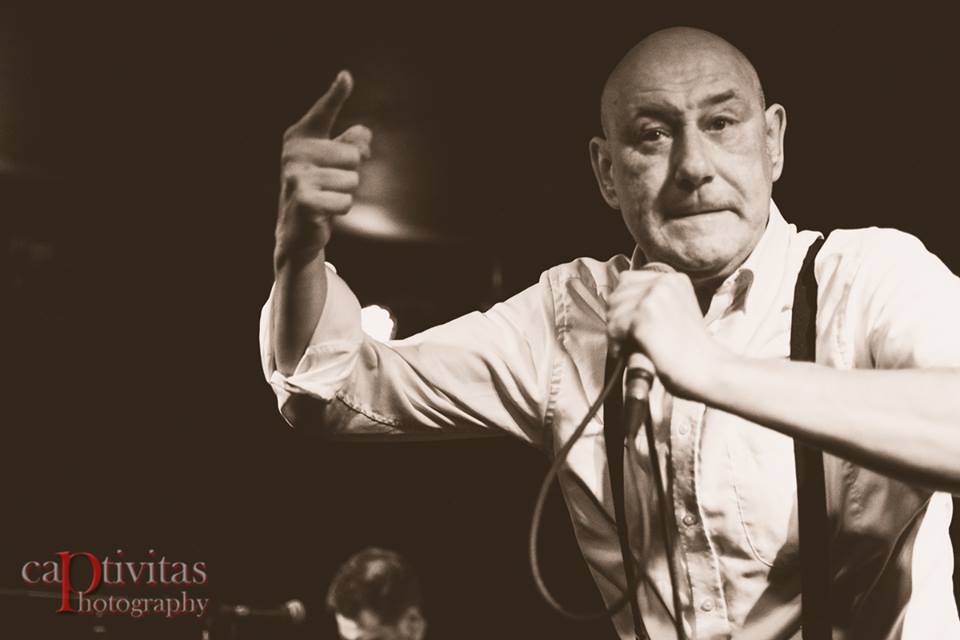 F.A Cup semi-final day and the local ale houses in Lewes were full to bursting with Brighton fans and me, the solitary City fan. I arrived early, bought some lukewarm chips from the local chippy resulting in my missing the only goal of the game, then watched the match in solitary silence, before making my way to a much-anticipated gig at the Con Club which would hopefully provide me with some much-needed stress relief. 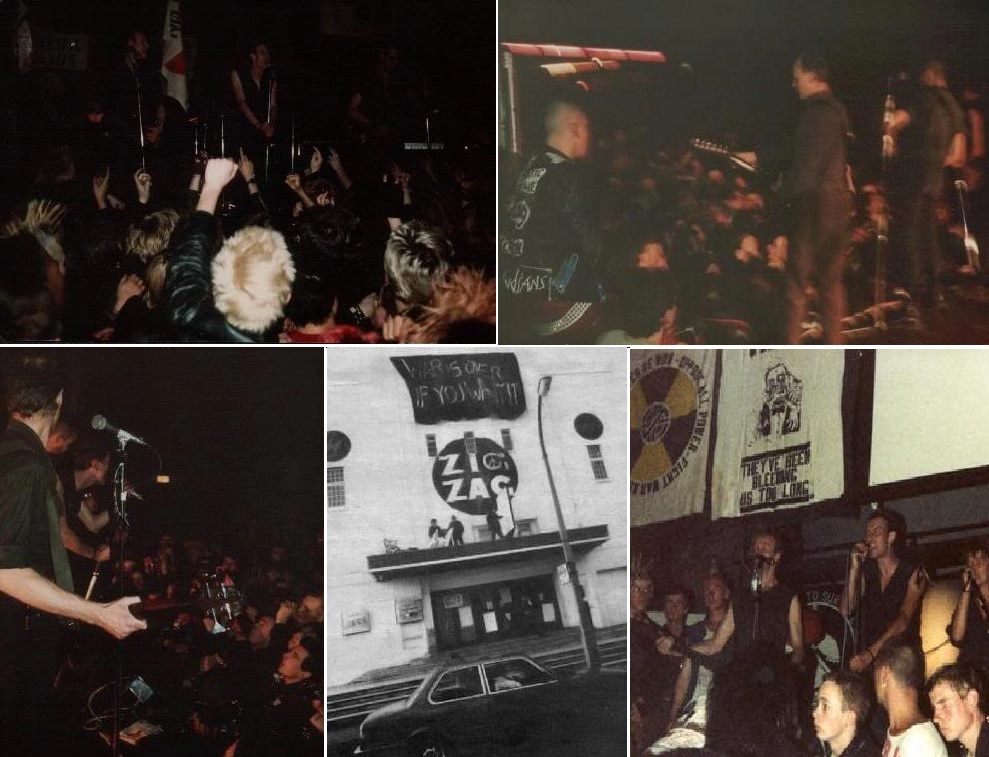 Crass and the Zig-Zag Club back in the day!

Having seen Crass play just the once back in December 1982 when they squatted the Zigzag Club in London’s Westbourne Park, I was looking forward to reacquainting myself with Steve Ignorant some 36 years later. That was a memorable gig as there were some 16 bands on the bill that day including the likes of Flux of Pink Indians, Conflict, Poison Girls, Dirt and The Mob. Even though Crass only played for about half an hour it was one of those ‘I was there’ moments which affects you for life. Their passion for the cause was unrelenting and definitely had some impact on my way of thinking politically. 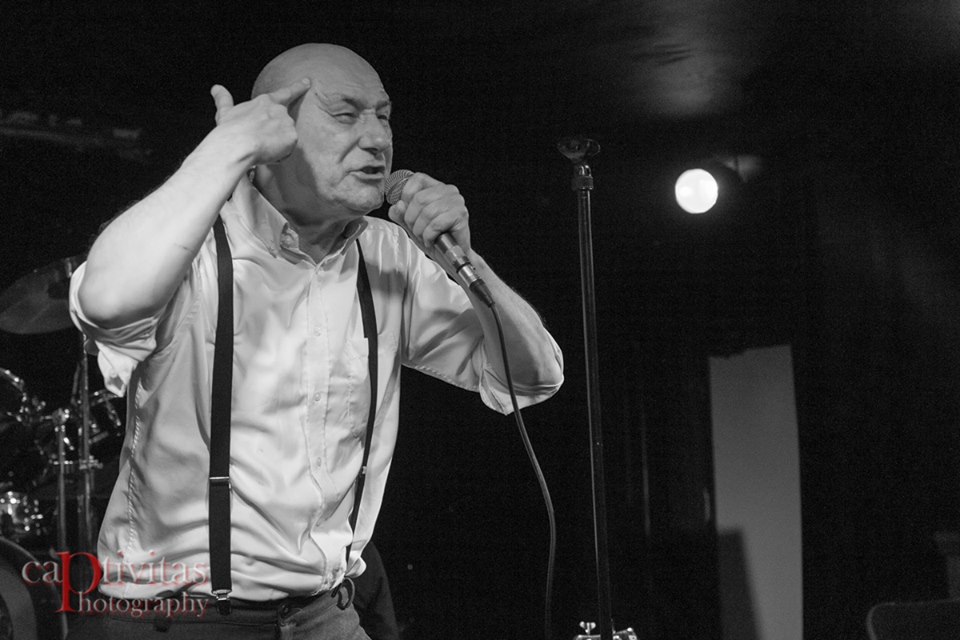 An interesting character, in more recent times, Steve has kept himself busy as a wood sculptor, volunteered on the Sea Palling Independent Lifeboat, has written his autobiography ‘The Rest Is Propaganda’ and has worked as a traditional Punch and Judy performer using the name Professor Ignorant. Aren’t we all just puppets really? Tonight though, I was intrigued to see how Mr Steve Ignorant had evolved musically. 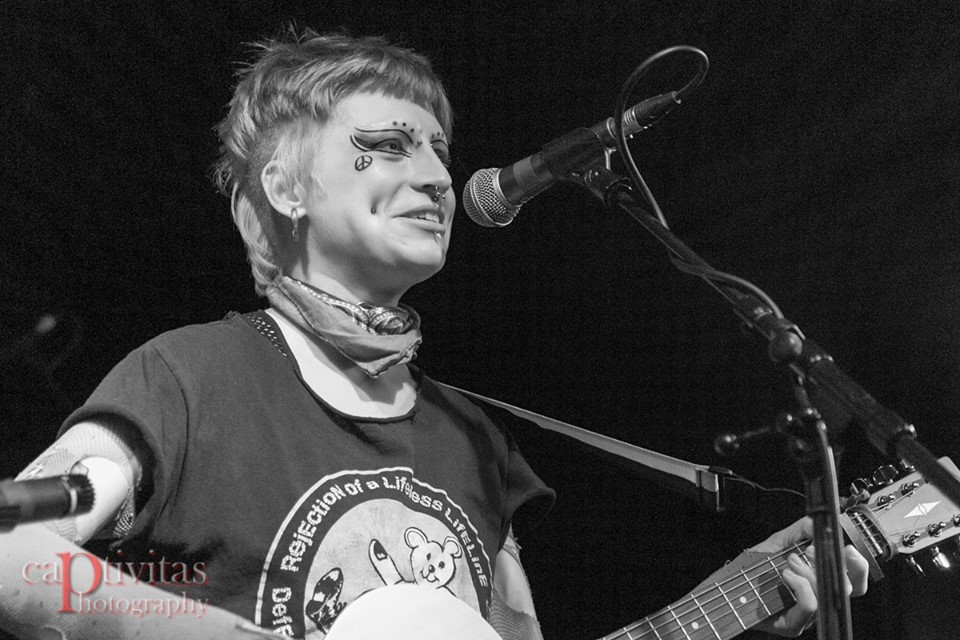 First onstage tonight was Emily Flea, formerly of The Fleas. Tonight, was only Emily’s third solo show and she admitted to being nervous having only played in front of a handful of people previously with the Con Club filling up fast. 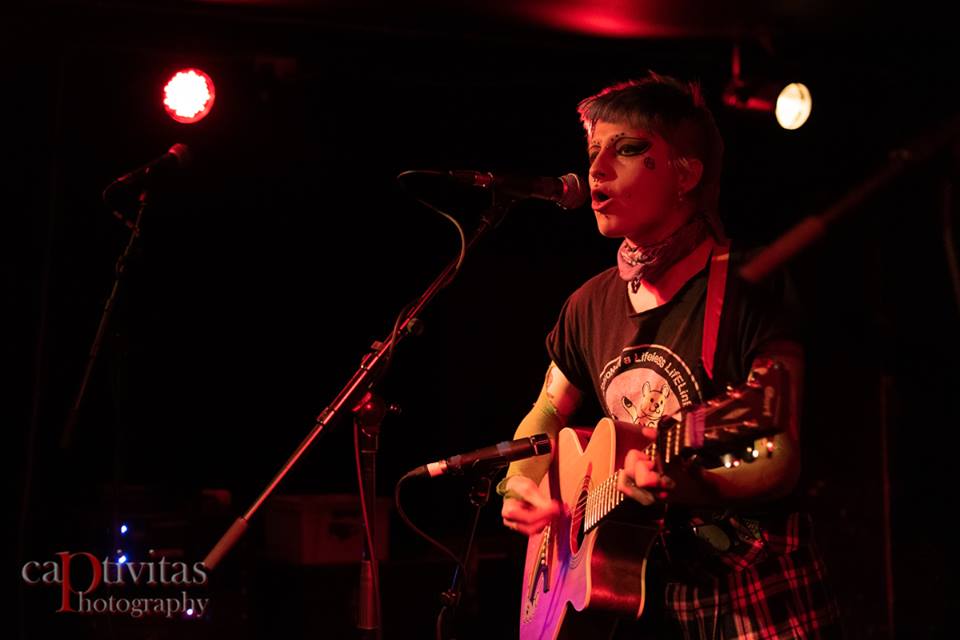 Armed with guitar and some hard-hitting lyrics, it was clear from the outset that Emily is vegan and an Animal Rights activist with quite a few of the songs centring around these issues. Unfortunately, there was no setlist to be had, so I am unsure of the song titles, but this was a no-holds barred rant at society. Nobody was exempt with the first song relating to a bad experience with middle aged white male punks showing lack of respect for youth, sexuality, gender, and pretty much being total idiots, though Emily chose rather stronger language. The next song ‘What’s Your Excuse?’ is certainly a track for anybody to listen to should they be considering giving up eating meat as this could sway them to do so. The verbal onslaught continued as Emily showed herself to be a voice of the young anarcho-punk generation and not those of yesteryear who are now part of the system. 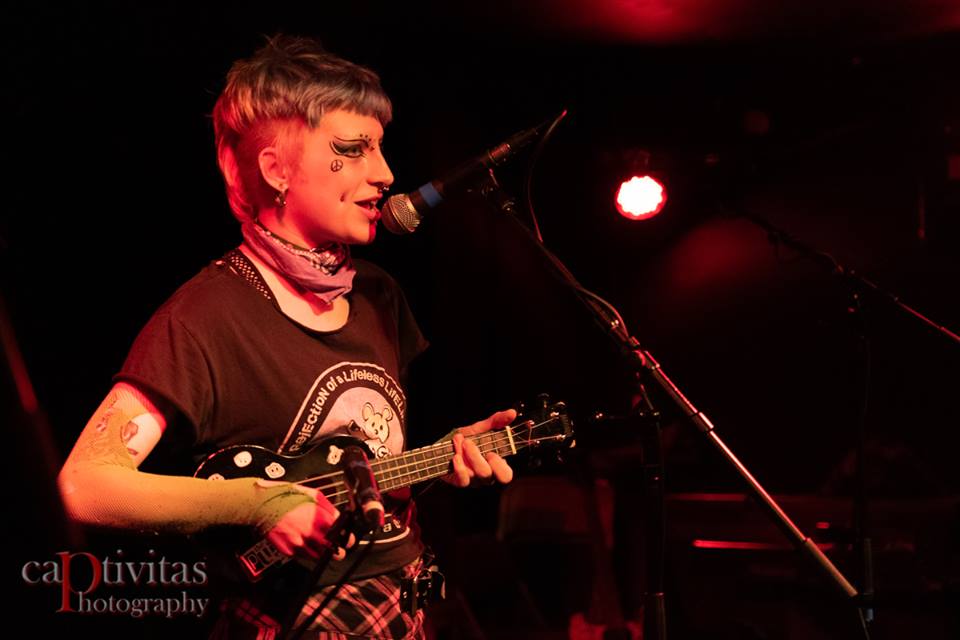 Emily told us how she had previously met Steve Lake from Zounds outside The Marlborough in Bristol when she had been playing ‘Dirty Squatters’ on ukulele and tonight she played us her rendition of this song which went down well with the crowd. Before the last song of the set we were told how in rehearsal it had lasted 35 minutes but due to nerves she had sung the songs twice as fast. Apart from Emily briefly forgetting the words to the last song, it was a performance that I will remember, not least for the anger that was conveyed in her songwriting which can make you feel uneasy.

The main support act for the night was originally supposed to have been The Cravats but due to Joe 91 falling down some stairs and smashing up his shoulder, they had to pull out. Any fans of The Cravats will have to wait until December 7th to see them play in East Sussex when they will be appearing at The Green Door Store in Brighton. 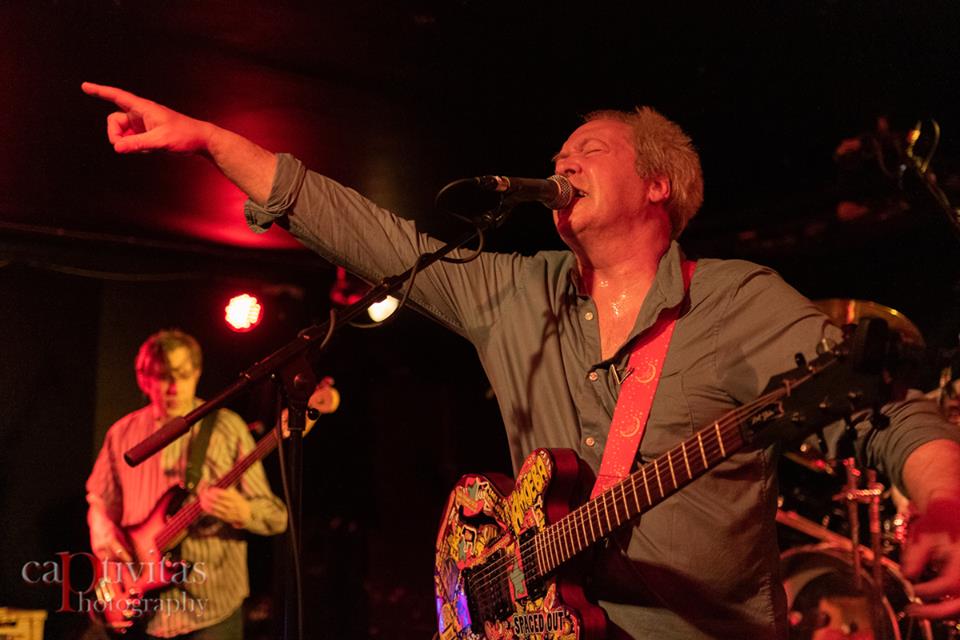 Tonight’s replacements were more than adequate as Zounds received the call up. Zounds were formed in Reading in 1977 and Steve Lake is the only surviving member from the original line-up. They split in 1982 only to reform some 25 years later with Steve recruiting Paul ‘Overdose’ O’Donnell and Paul Gilbert from a primal rock ‘n roll band named ‘The Evil Presleys.’ 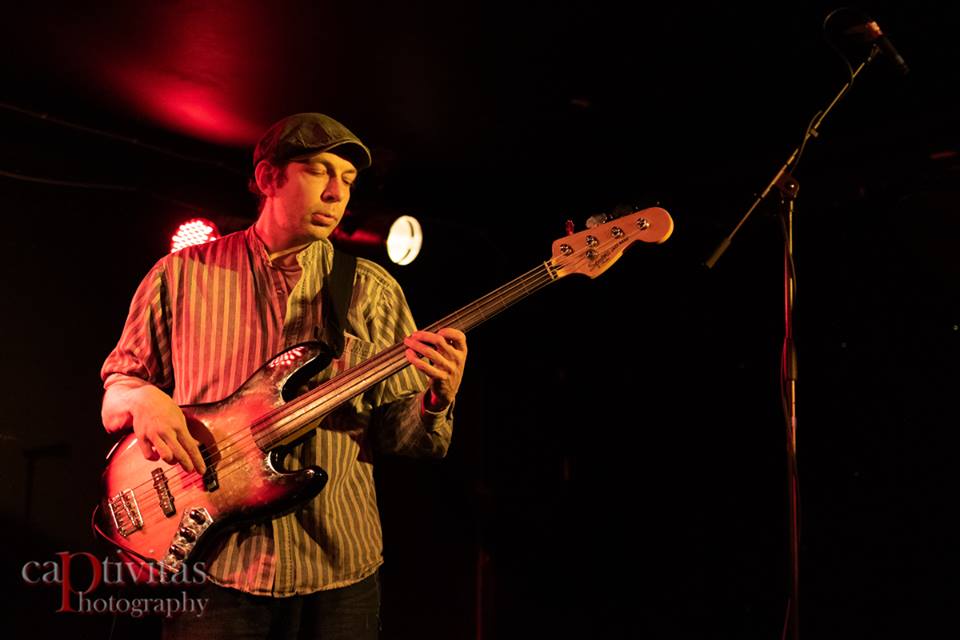 Steve was full of endless stories including about how Mick and Keith from Freddie and the Dreamers(!) or some band, ended up in HMP Lewes, and how they are linked to Jacob Rees-Mogg, which was spread over three songs. Anyway, as we eventually found out, apparently his father, William Rees-Mogg, wrote an editorial in The Sunday Times which spared Jagger and Richards from a prison sentence. Steve expanded further on the Emily Flea meeting and told us how he had even paid for her taxi home with her girlfriend. At this point he invited Emily onto the stage to take lead vocals on ‘Dirty Squatters’ and I have to say that she looked more at home with a band behind her. 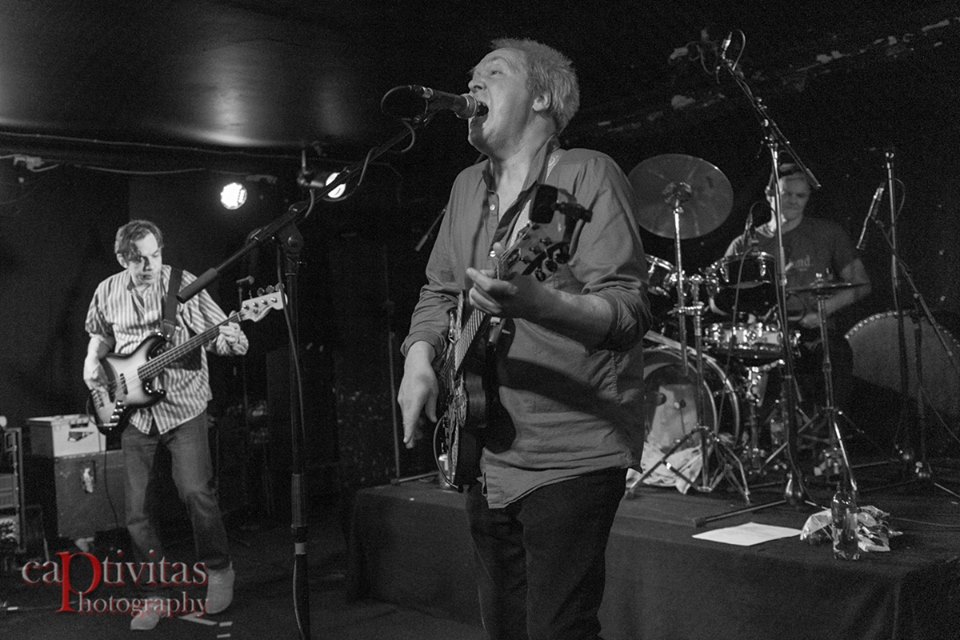 In between the anecdotes, Zounds entertained us with an energetic set which got the mosh pit in full flow. For me though it was the eight minutes and fifteen seconds of ‘Did He Jump’ that had me captivated by the lyrics highlighting the tragedy of teenage suicide which is even more prevalent today than way back in 1982. ‘Can’t Cheat Karma’ from 1980 was another of my personal highlights of their set. This was released on Crass Records and was obviously greatly influenced by the band being produced by Penny Rimbaud with the record sleeve designed by Eve Libertine. 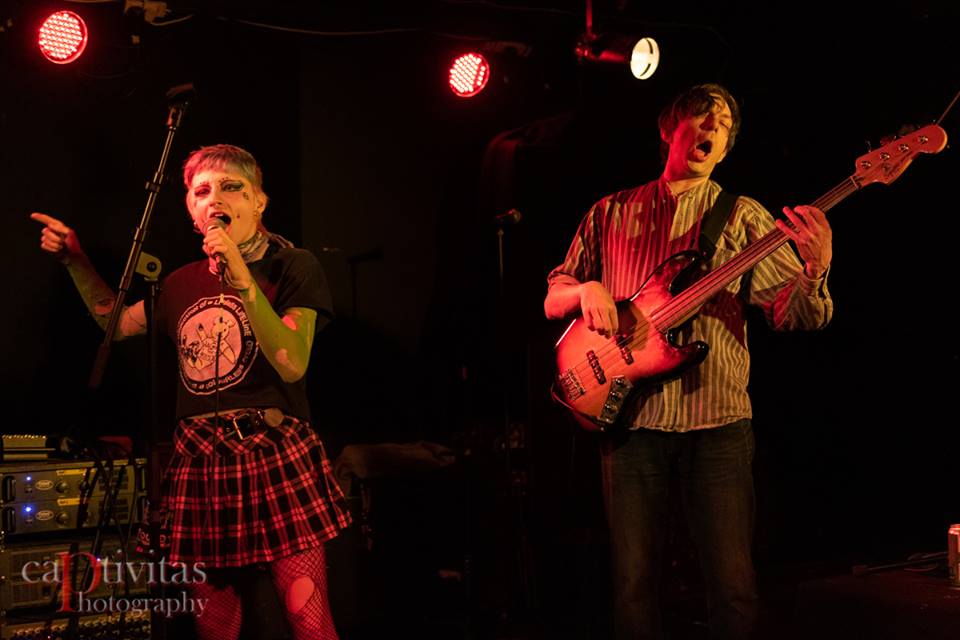 It was noticeable that Steve Lake was waning from the intensity of the set and let us know that either he or his guitar was about to give out. He was even eating cheese and onion crisps to give himself energy. Sadly, either he or the guitar didn’t quite make it to the end, but all the same, it was a storming set which had more than warmed up the crowd for the headline act. 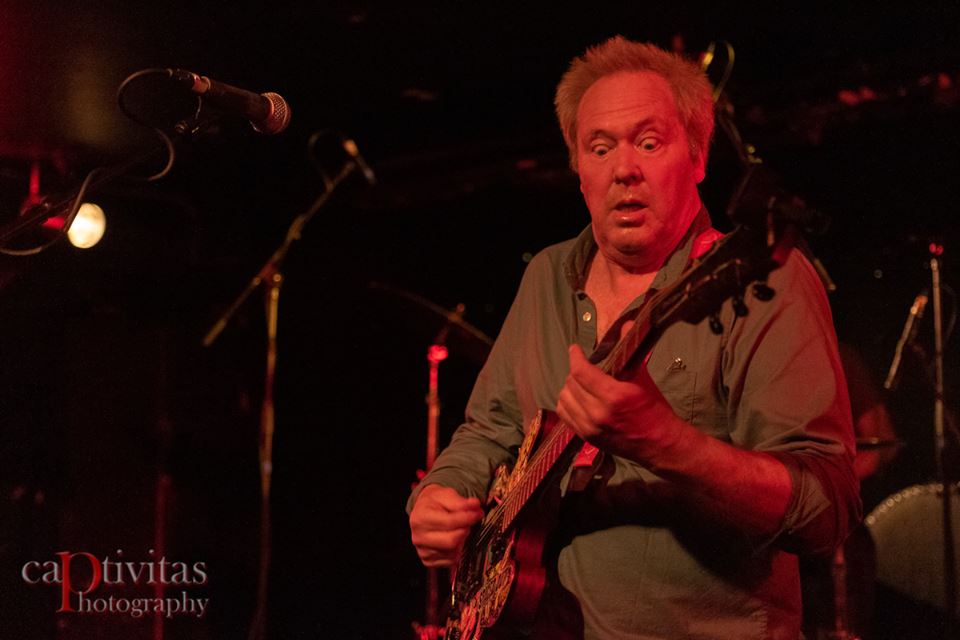 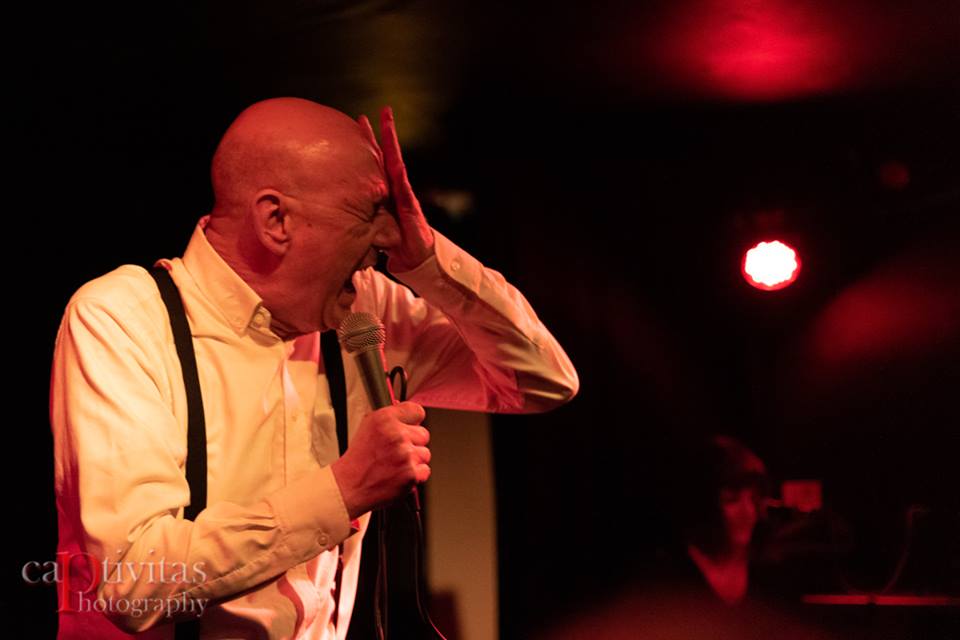 So here I was in the always welcoming Con Club, preparing myself in order to review Steve Ignorant’s Slice of Life. Those of you who are familiar with the works of Crass will understand my trepidation in reference to ‘Hurry Up Garry (The Parson’s Farted)’ from their second album ‘Stations Of The Crass’ released in 1979. Unusually for this double LP it plays at 45rpm on all sides apart from the fourth which is a live recording and plays at the usual 33rpm. For my copy I paid no more than £3. Said track slates music journalism with an obvious mention of Garry Bushell who was writing for Sounds at the time, which given my memories of Steve from his younger days filled me with angst. Having seen a fairly amiable recent photo of Steve and Garry taken together I felt slightly less nervy but nonetheless this was still the leading figure from my past flirtation with the anarcho-punk scene and I was feeling tense. The only way to overcome my fear was to stand right at the front and stare him straight in the eye. 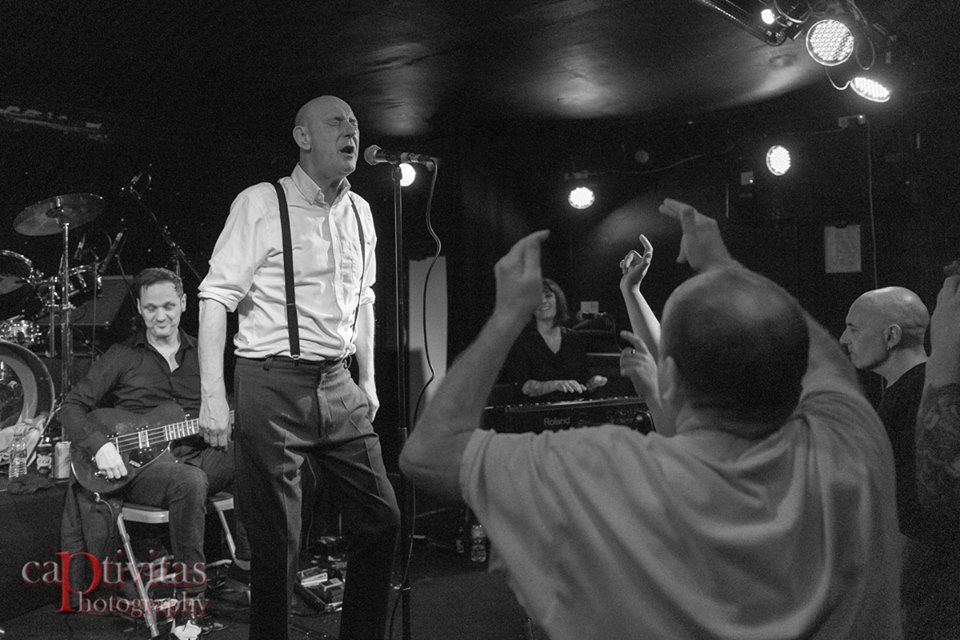 As three chairs were placed on stage I started to realise that this was going to be slightly different from a Crass gig. The band took their seats closely followed by the man himself looking very dapper in his silver/grey suit, white shirt with black braces, tassel loafers and pork pie hat. This was a far cry from the young Steve Ignorant who regularly wore anything black and often sleeveless shirts. I started to realise that Steve had obviously matured in the 37 years since I had last seen him perform. 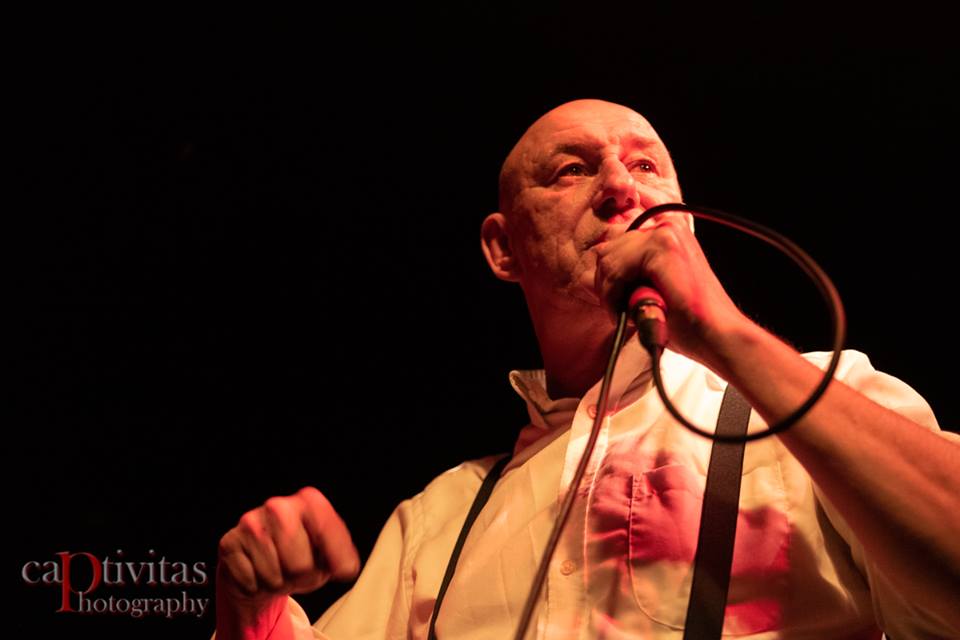 This was confirmed once the music started. The band really could play their instruments and masterfully at that. I was lulled into thinking that Steve had also mellowed until he broke into the spoken word which accompanied the melodies and backing vocals provided by the band. I could instantaneously see the anger and menace return to his face. Although a complete departure from his days in Crass and maybe not what I expected, this worked brilliantly. Easy-listening punk with a real edge to it. Perfect for all middle-aged anarchists.

Early on Steve gave the microphone stand to a member of the audience to give himself more space on stage, rather than grabbing hold of it and bellowing into the microphone for all he was worth as would have been more likely in years gone by. 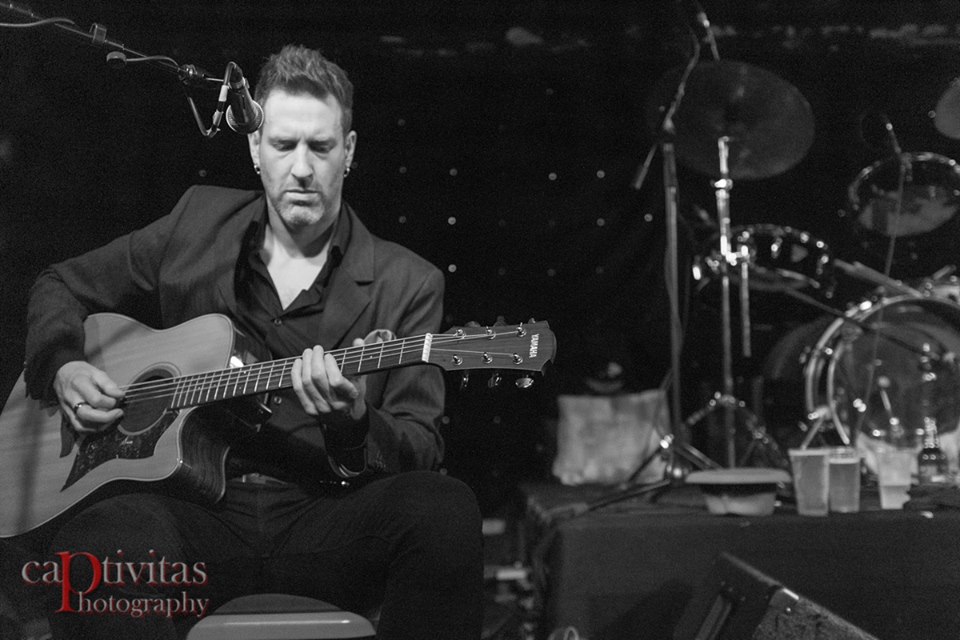 Similar to what I had witnessed two days earlier from Dunstan Bunce (ex-Chumbawamba), this was another roller-coaster autobiographical journey. He opened up to the audience about his mental health when he played ‘Sad’ relating it to depression and not wanting to come out from under the duvet for a couple of weeks. It was particularly poignant and highlighted that mental health is a serious issue and can hit anyone one of us at any given time. It had been rumoured that Steve would no longer play any Crass tracks live but thankfully that was not the case. After performing ‘Sad’ in true punk style he refused to conform, ignoring the setlist to give us an impromptu rendition of ‘Do They Owe Us A Living?’ 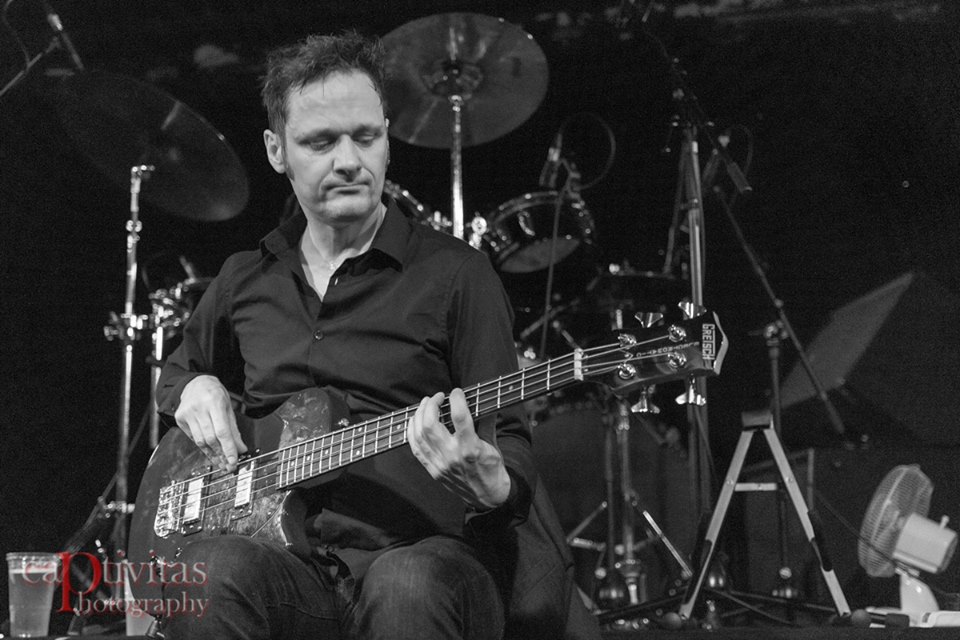 Musically he may have mellowed, but you still wouldn’t mess with him. At one-point Steve tells us that he doesn’t mind what we eat as that is our choice, but also tells us of his love for animals, in particular his dog and that if you mess with his pet then he will tear the face off you. This statement should have served as a warning to the four people engaging in a loud conversation in the crowd during his set that he doesn’t suffer fools gladly. Thankfully they disappeared shortly after being forcefully told off by Steve, which was fair play as they were starting to ruin the enjoyment of a fine night for those stood close to them. I think we all realised who the ignorant ones were! 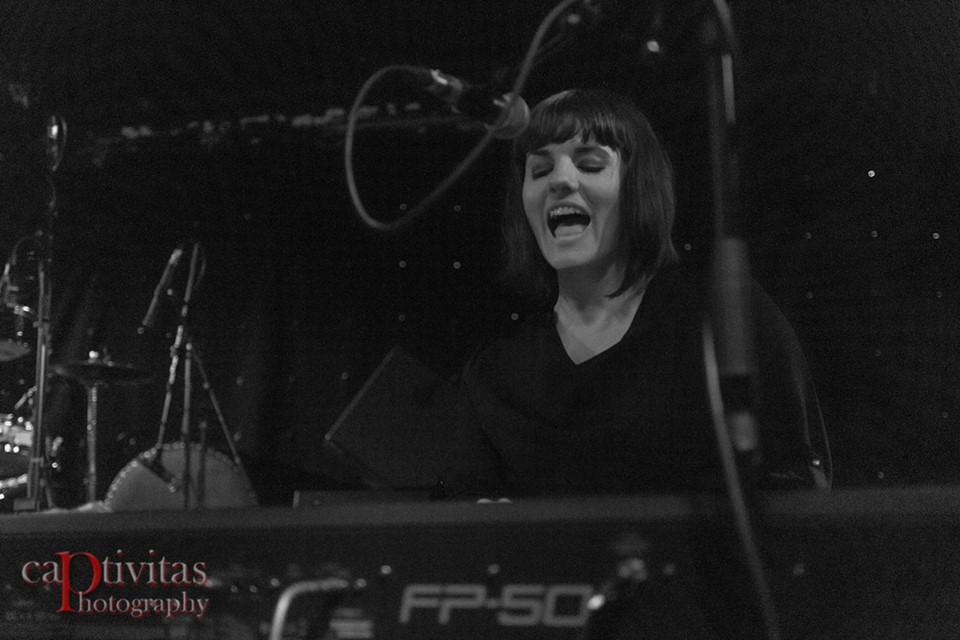 One of my personal highlights of the set was ‘The Way Things Are…..and Other Stories’ which Steve originally performed with Schwartzeneggar some 25 years ago now.

To top off a great gig we were treated to a couple of more Crass classics in ‘So What’ and ‘Banned From The Roxy’ much to the delight of the crowd who sang along as if it were 1979. Tonight, Steve proved himself to still be the voice of the anarcho-punk older generation and there was respect from the younger members of the audience, apart from the four loud talkers who were Banned from the Con Club. 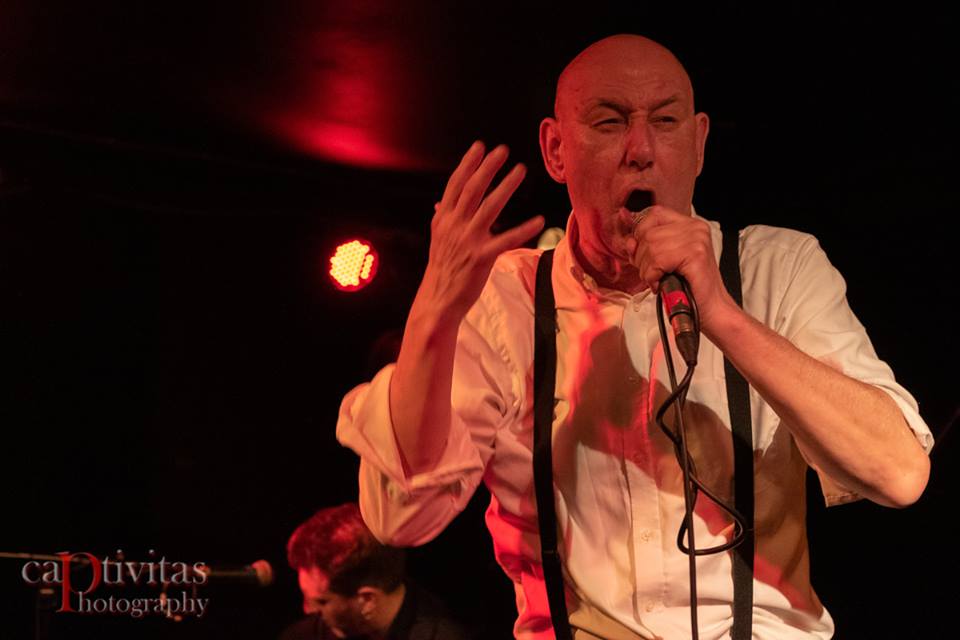 I have to once again mention the band who made it all look so effortless, though Pete Rawlinson did have a bit of a sweat on from his constant foot-tapping, but at the same time you could see the passion and belief they have in the songs. They complemented the style of the lead singer which made this work perfectly. 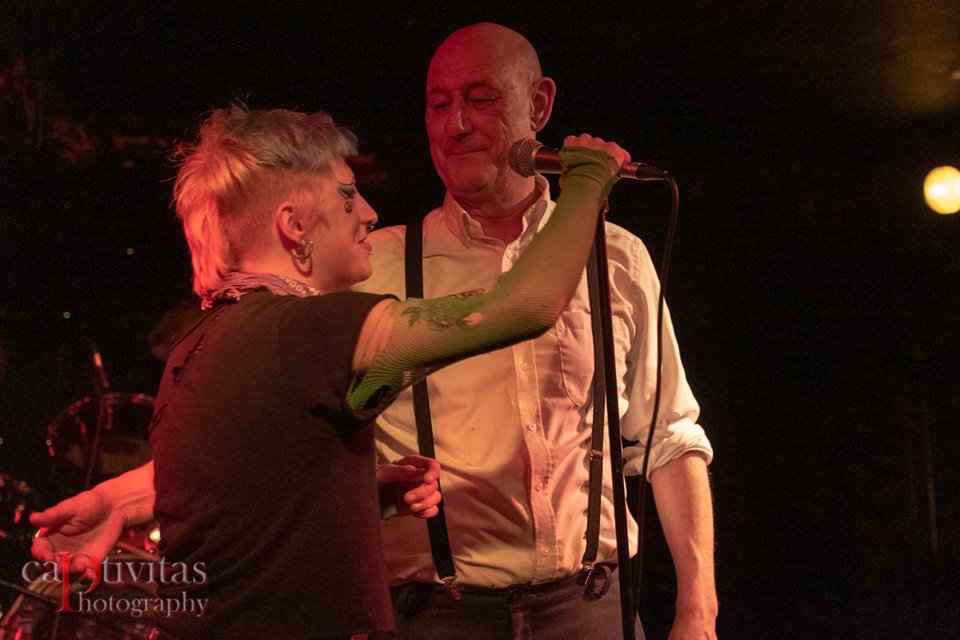 As I have witnessed recently there is a definite resurgence of the anarcho-punk scene, or maybe it just bypassed me along the way, but it has grabbed my imagination once again as all those in power in Westminster continue to make a dog’s dinner of running the country. 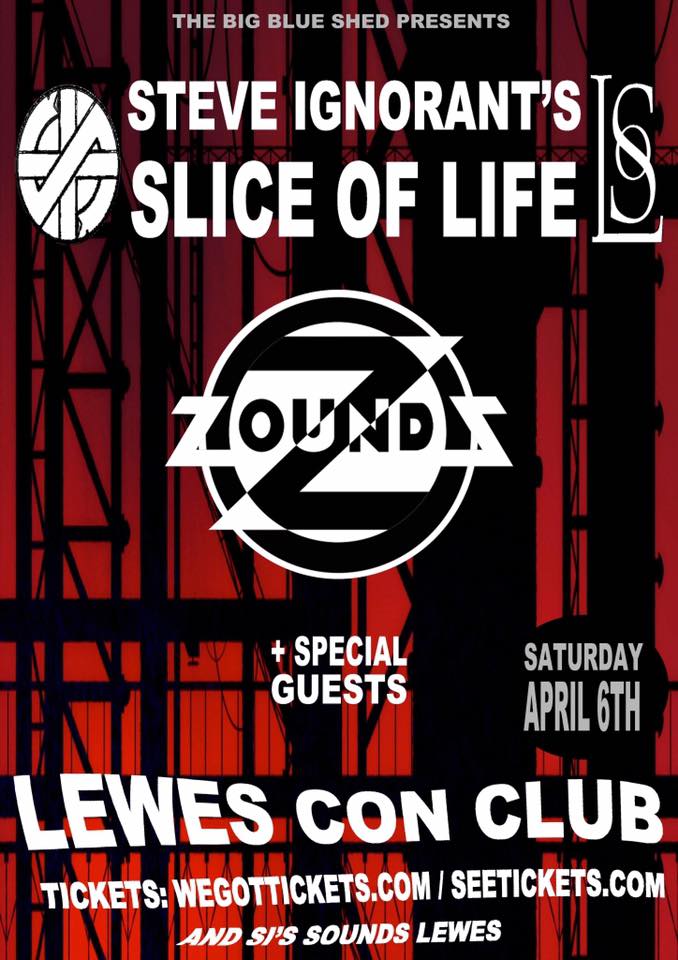 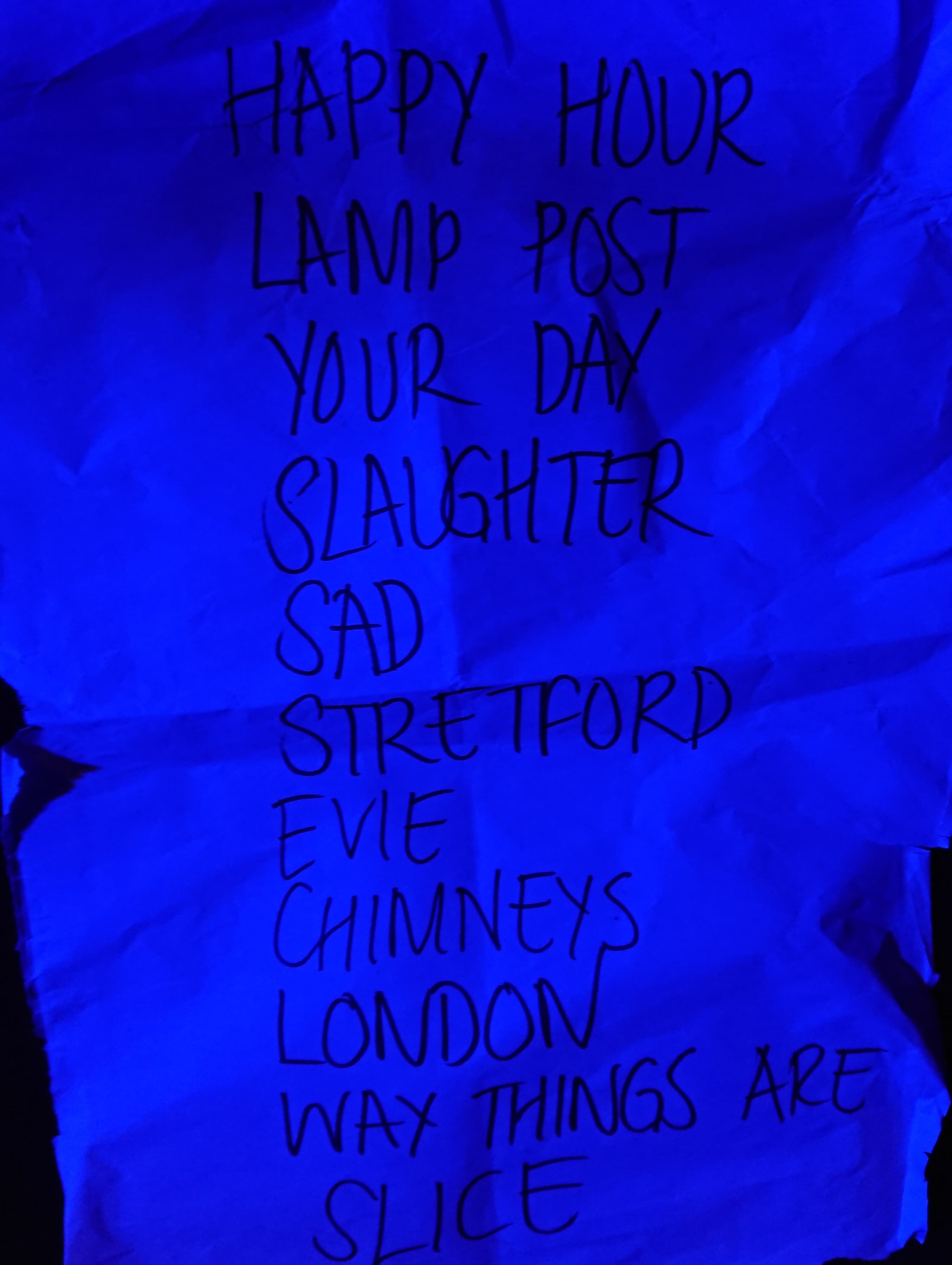 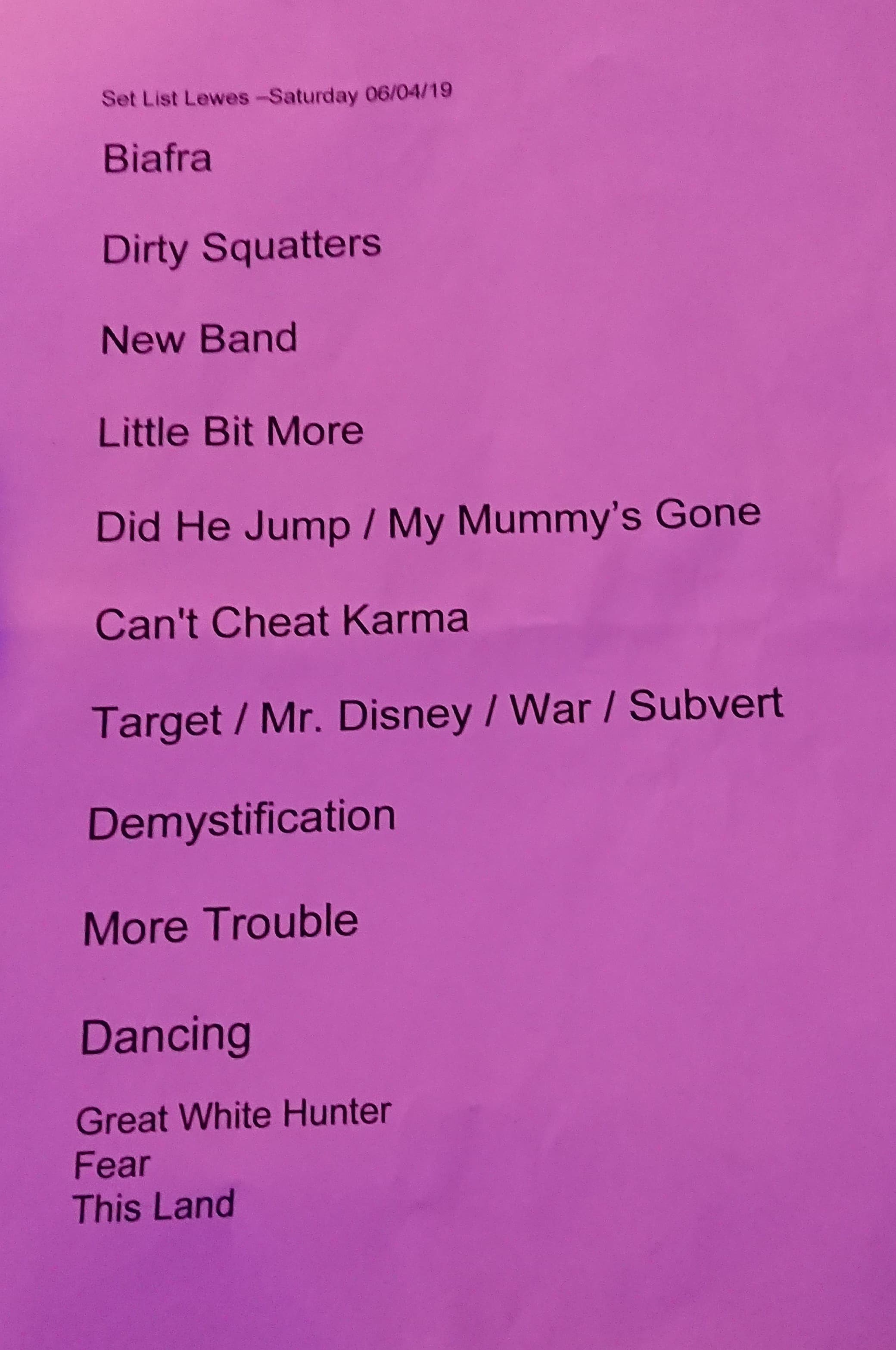 Cro-Cro Land Festival lands with a bang….of the drums and screech of guitars!