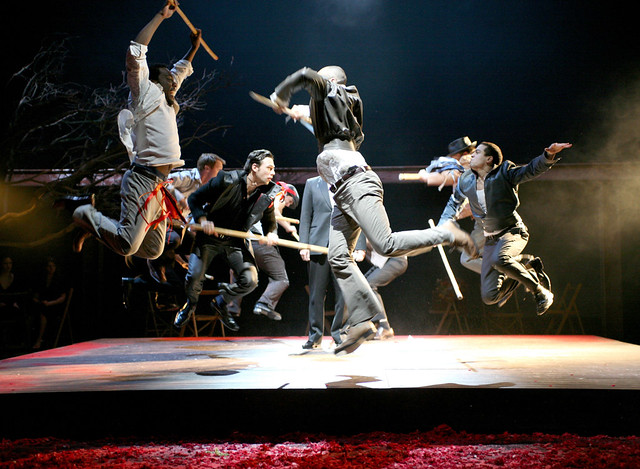 RSC Montagues and Capulets by Guy Evans on Flickr

Radio 4’s World at One coverage of the mood of the electorate, ahead of Thursday’s local elections, produced the comment I used to ruefully title this post.

The chaos of Westminster has poisoned the well of politics entirely it would seem, exposing the threadbare truth beneath the window dressing of flyers and door knock chat, of manifesto promises and what is deliverable.

We know we are a divided nation, that local councils are in disarray, not doing a good job and that we have no idea who to vote for or who these people are, standing for various parties and factional groups.

Most people who even bother to vote just choose a party and vote for their candidates.

Sometimes that just buys you cardboard cutouts – robots at committee meetings going through the motions who will be ward-invisibles for the next four years. Lately that tribal vote is harder to justify. The sense of threat in the air demands more.

The centre of politics has imploded even as more polarised politics emerges which just serves to divide us even further and make us feel more insecure.

“You’re on your own now, Marge”, my great uncle Ed barked in his dying days to his flutteringly angsty wife; and politics in its dying is saying that to us now.

You can no longer just leave it to political parties to choose capable people who will keep the machines of governance in order. You need to take personal responsibility for WHO you vote for.

This map allows you to click on your ward and read the responses to questions sent to every candidate standing in the city. It will help you to know a bit more about them. Give you another yardstick by which to judge personal capability. Some are very revealing indeed.

There will be an awful of lot new and totally inexperienced councillors in the next council.

Very experienced councillors are retiring, and 50% of the last intake was brand new. I hope good councillors standing for re-election will be successful and that bad/useless ones will be weeded out.

Most new ones will never have been to a council meeting, never spoken to a council officer, never engaged with a planning application even. They will struggle to be useful for a long time. I recommend voting for a mix of (tried and tested) incumbents and new people to get a functional council!

There will be gung-ho, attack-dog, Momentum types who will be slapped down fast and hard by the officers, like unruly children in a boot camp. They will be in harness and they won’t like it. There isn’t the council income to indulge their demands. Get over it.

Their mud-slinging/class war mindset will have no outlet and could even result in standards complaints and enforced resignations and by-elections. There is a city to run and declining budgets for doing it.

Indeed, it is already the case that a couple of candidates, shown as Labour on the already-printed ballots, are no longer eligible to stand for Labour because of behaviour issues. Their withdrawal by the Party came too late to take their names off the ballots. They can only be voted in as Independents.

And then there are the ordinary Labour candidates,some of whom deserve re-election: but not all.

Beyond the swivel-eyed loon brigade and even amongst them, there will be gems to be found and voted for. if you look and listen carefully.

There will be jeering young PC Green types who are more about widening the Green remit to serve endless rights and equalities factions than old fashioned simple environmental things that are actually green – like street trees, parks and gardens and the problem of events and visitors trashing the place and not being stopped from devastating the environment they visit, costing residents a fortune to clear up.

Behind the over-dominant PC sloganising and haranguing are some brilliant people who can cut to the chase and hold officers to account with aplomb and DO, on all the basic issues. They deserve re-election.

There will be smug Tories who wear their sense of entitlement with pride and raised eyebrows. But they dress well. They have a dress code that means they turn up looking more professional than all the rest and because politics is theatre, the actors then behave accordingly. The Tories will look like they know what they are doing.

But as we have seen in Westminster, some might not actually have a clue. Choose carefully from their offerings. Some of them are brilliant. Some are inexcusably lazy.

Then there are the LibDems, UKIP, the Women’s Equality Party and at least one tub-thumping Independent – your protest votes.

I tell people I feel the turnout will be historically low. Democracy only exists if we bother to vote. I hope you will vote mindfully and know what you are buying with it.