The owner of a new night club has asked councillors to approve later opening hours than the pub that previously occupied its central Brighton site.

Stonegate, which turned the Yates in West Street into Popworld, has a licence until 2am.

When the company asked for a 3am extension, Sussex Police and the Brighton and Hove City Council licensing team formally objected.

Stonegate Pub Company’s operations director Paul Wright said that the focus had switched from food and sport to “songs you can sing along to”.

Police licensing officer Mark Thorogood told a council licensing panel – made up of councillors Jackie O’Quinn, Lynda Hyde and Lizzie Deane – that West Street was a crime hotspot on Friday and Saturday nights.

He said that in February last year to February this year there were 340 incidents reported to the police in West Street, Middle Street and Ship Street, with 82 per cent occurring in West Street.

West Street is in the centre of an area that has been designated a “cumulative impact zone” by the council where licensed premises are deemed to be at saturation point.

The saturation is linked to problems of crime and disorder, anti-social behaviour and public nuisance.

As a result, the council does not normally permit new pubs and clubs other than in exceptional circumstances. Similar rules apply to requests for later hours.

Mr Thorogood said that Sussex Police wanted people to leave the area quickly and safely to prevent  crime and disorder.

He said that the area was unique with numerous bars, clubs and off-licences in just a few city centre streets.

It is also at the heart of the area where the force carries out Operation Marble on busy nights to police the night-time economy.

He said: “The applicant states that all but one of their Popworld premises has similar opening hours to the ones being requested.

“But how many of these premises are in a similar highly populated licensed area?

“It is not like London or Manchester where venues are spread over a large area. Everything is very closeknit.” 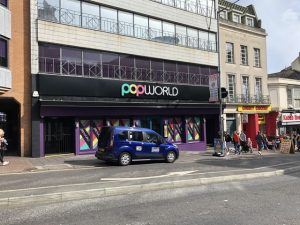 Sussex Police was concerned that the proposed 3am closing time would see Popworld customers head into the busy street at the same time as hundreds leave Pryzm on the corner of West Street and the seafront.

Stonegate’s solicitor Clare Eames saud that the venue was focused on music and entertainment, with an older, female-led demographic.

She said that the company would be willing to accept a licence limiting late opening to musical entertainment.

Mr Wright said that the tried and tested process of staggered shutdowns at Popworld venues in other parts of the country would be used in Brighton so that people left the 500-capacity club gradually.

The first floor bar would be shut down from 12.30pm, to encourage people to start thinking about leaving.

He said: “We have a number of premises across the country where we have a similar situation with a much greater capacity.

“We will allow a number of people into the premises, when we get closer to capacity we hold the door.  We stop serving alcohol on that floor closing down and people start making their way out.”

The panel sat at Hove Town Hall on Friday 26 April. It retired to make its decision which is expected to be published after the Monday 6 May bank holiday.