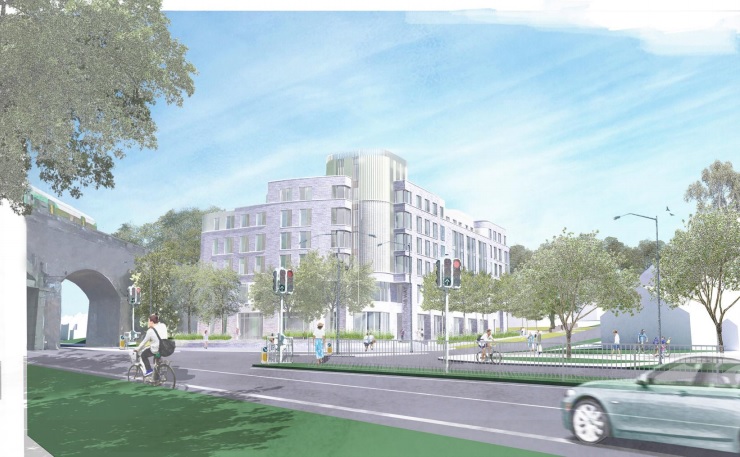 A community meeting is to be held over fears about what plans for a large block of student flats could mean for the neighbourhood.

Developer McLaren Property has submitted plans for buildings ranging from five to seven storeys with 378 student bedrooms as well as offices and community space at One Moulsecoomb Way.

Co-chair of the Moulsecoomb Local Action Team (LAT) Barry Burtenshaw set up the meeting for Wednesday, 5 June, after discussions with councillor Daniel Yates.

Mr Burtenshaw said he and his neighbours want to see more family homes on the site.

He said: “We have had enough. The council wanted family homes as so many homes are HMOs (houses in multiple occupancy).

“A lot of kids are not going to our schools because there are not the families moving into Moulsecoomb and Bevendean.

Mr Burtenshaw said council tenants in the area could not move away from the noise and mess of the multiple student homes in the area in the way a home owner could as there was nowhere for them to go.

Councillor Yates told the LAT meeting he was aware of a petition against the plans.

He explained how a petition with a thousand signatures counts as one objection but each one of 1,000 different letters counts individually.

“It’s important for us as councillors to hear what people’s views are and help people with their responses to the planning application.

“I haven’t heart anyone say they desperately want to keep a skip hire company.

“The concerns are the type of use of the site and the impact it will have in terms of noise, parking and the impact on people’s lives going forward.”

He hopes council officers and representatives from McLaren will join councillors at the public meeting.

LAT co-chair Pete Weston is concerned about the loss of the skip hire and waste transfer company.

He said: “I am concerned as KSD is the only waste transfer company that will take on small builders waste and trade waste. The big recycling centre in Hollingdean won’t touch it.

“My concern is if they put student flats there and get rid of the skip hire there’s nowhere for the smaller trade waste people to tip in Brighton.

“I’m not saying they will all do it but it is going to lead to more fly tipping which will mean the council will have to pay more to clear it up.”

McLaren’s application says a new site has been found for KSD to relocate to at the former Skip-it premises in Newhaven.

The public meeting will take place at Moulsecoomb Leisure Centre from 7.30-9.30pm on Wednesday, 5 June.

Plans for One Moulsecoomb way can be seen by visiting planningapps.brighton-hove.gov.uk and searching for BH2019/01272.