There’s only one Bill Drummond! 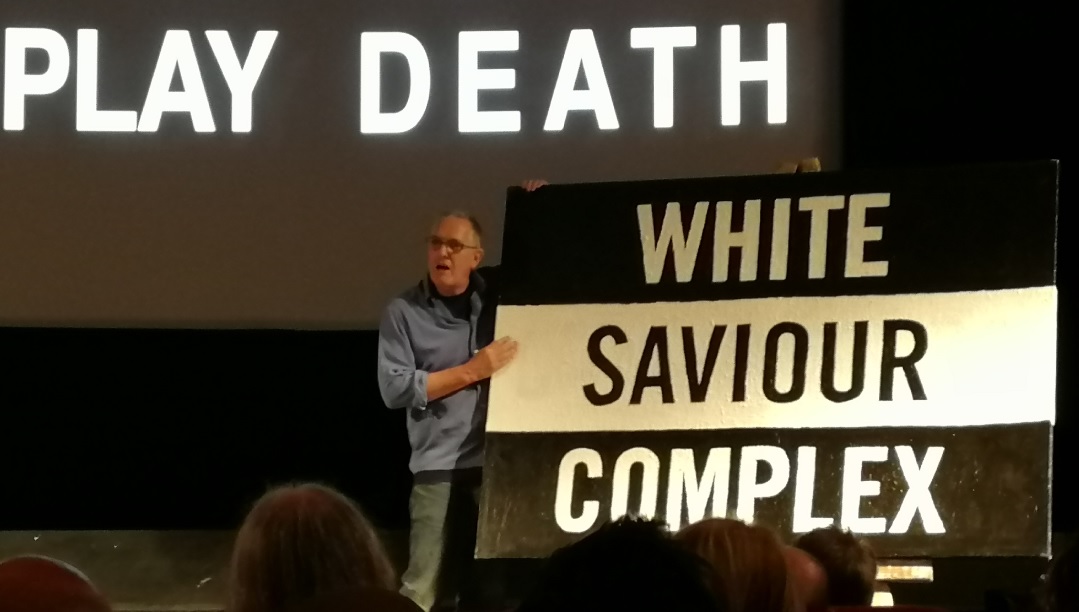 The intrigued souls hastily made their way in the rain to the Duke of Yorks Picture House located at Preston Circus in Brighton, in order to witness something a tad out of the ordinary. The early evening’s entertainment would in essence be an amalgam of live theatre and film, both of which centered around 66 year old South African born, but definitely Scottish Bill Drummond.

A majority of readers will in fact know Bill as the taller of the two former members of the legendary KLF art music group. A non-conventional band consisting of Bill and Jimmy Cauty, that reigned supreme during the late 80’s and early 90’s. They deservedly were the biggest selling singles act of 1991, having unleashed the timeless classics of ‘What Time Is Love?’, ‘3am Eternal’ and ‘Justified And Ancient’. Here was a band that challenged it seems everything around them, including the music factory that they were a part of. They simply would not conform and continued to think outside of the box. They would release records under different names (The Justified Ancients of Mu Mu, The JAMs etc) and in disguise (The Timelords)

They left the music business after an incendiary live show at the 1992 Brit awards, and formed the K Foundation, dedicated to provocative art activities, before burning a million pounds of their own money on the Isle of Jura in 1994, after which Cauty and Drummond agreed a 23-year moratorium on working together.

Once you’ve achieved all of that, what exactly do you go on to do? Well, tonight the word “artist” kept coming up time and time again, so clearly Bill sees himself as an artist these days and not a musician. Maybe he always was an artist?

I had always wanted to see the guys in person and knew in my heart that there was no chance of ever seeing The KLF performing live. Thankfully, my colleague and myself were lucky enough to see (and briefly talk with) Cauty in the flesh at one of his 40 feet long shipping container art installations on wasteland in Hastings two years ago. So this just left Drummond on my list! Tonight….mission accomplished!

The evening commenced as Bill Drummond and his new brother in arms, Tam Dean Burn, took to the stage for the seventh time on their eleven date UK and Ireland tour, having previously graced picture houses in London, Oxford, Liverpool, Leeds, Dublin and Belfast, with remaining dates Hackney, Cambridge, Norwich, and York still to run.

They were both reading extracts from the book of the ‘White Saviour Complex’ play. But so as to hand over the batten from one to another they ‘had to’ partially get undressed and swap clothing. This was amusing witnessing Drummond in his boxers, but my colleague and myself were primed for anything to be honest. 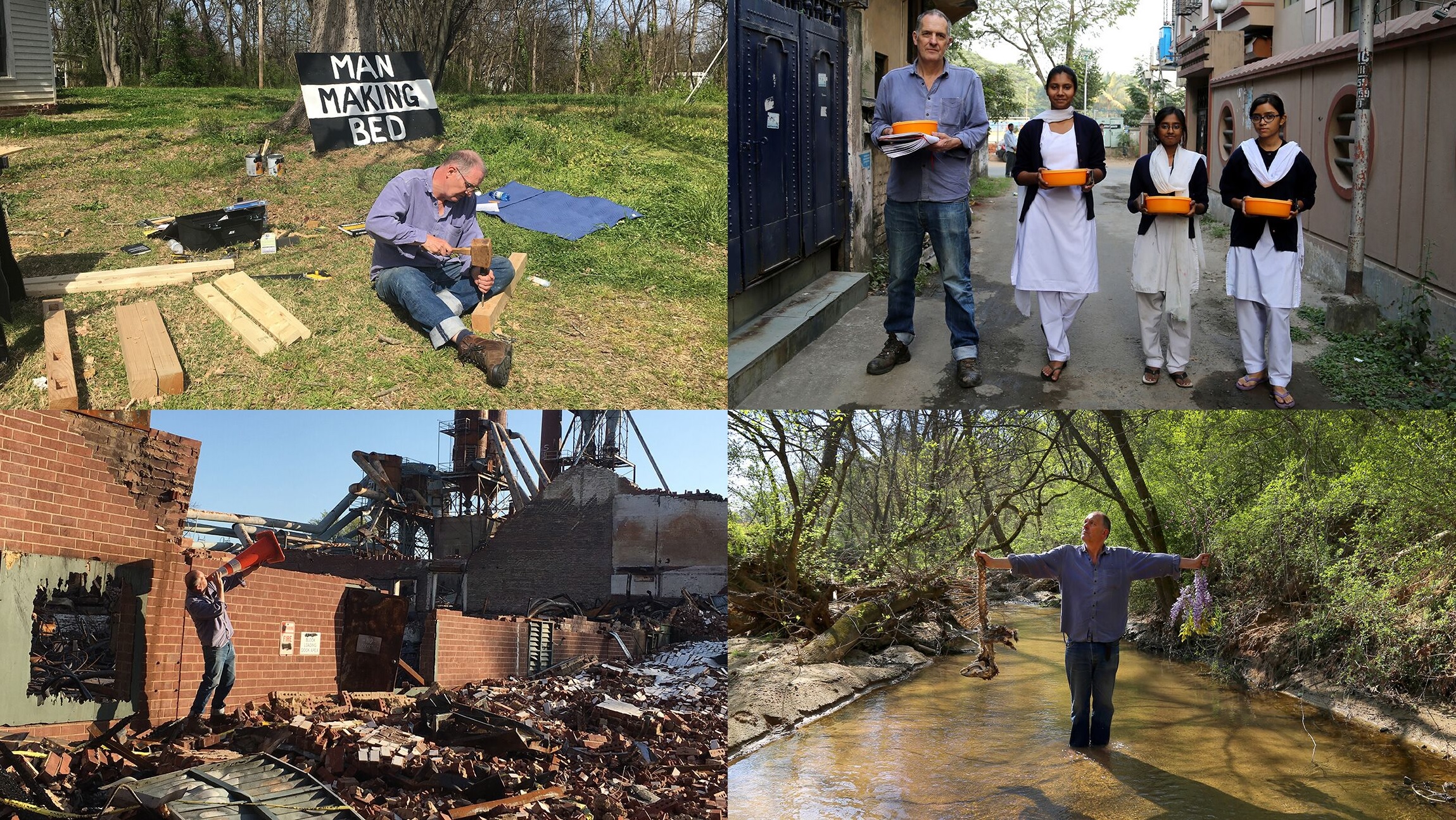 ‘Best Before Death’ (click on Tracy Moberley’s pics to enlarge!)

The readings led up to the central part of the evening, which was a documentary film by Paul Duane titled ‘Best Before Death’, which is a portrait of the first two years of Drummond’s 12 year world art tour, referred to as The 25 Paintings. Here’s a snippet of what it’s like – click HERE.

The 25 Paintings are a reference to the triple level black and white word signs that he produces on his journey. Although watching the ‘Best Before Death’ film, one does get the feeling that it’s almost a pilgrimage or redemption of sorts.

The film starts beneath Spaghetti Junction in Birmingham and sees Drummond at the beginning of his journey, where he paints his face whilst standing in front of one of the paintings, then strips off and then briefly ‘cleanses’ himself in the river. We are whisked off to Kolkata in India, where he based himself from December 2016 and then to the backwaters of Lexington in North Carolina, where he took up residency in Spring 2018.

It becomes evident that Drummond certainly doesn’t share the same thought patterns as the masses and can at times initially appear ‘awkward’ with the people that he is interacting with. In essence, several Indians and Americans encountered are not quite sure why on earth, Bill is doing the things he is doing. People are intrigued and initially sceptical as to what his motivations are. As the film rolls on, you realise that there’s an almost Raymond Babbitt analogy and charm to things and they have to be completed a certain way. Drummond has a set of self imposed rules, such as soaking his jeans to fit on each location and carrying out regular ordinary work a certain way.

In India he has a discussion with a lady about wanting to walk across the longest bridge he can find at dawn banging his parade drum, and she suggests that he might need permission from the police. To which Bill replies “I don’t like getting permission”. This made me and many people laugh, and it seems to sum him up. 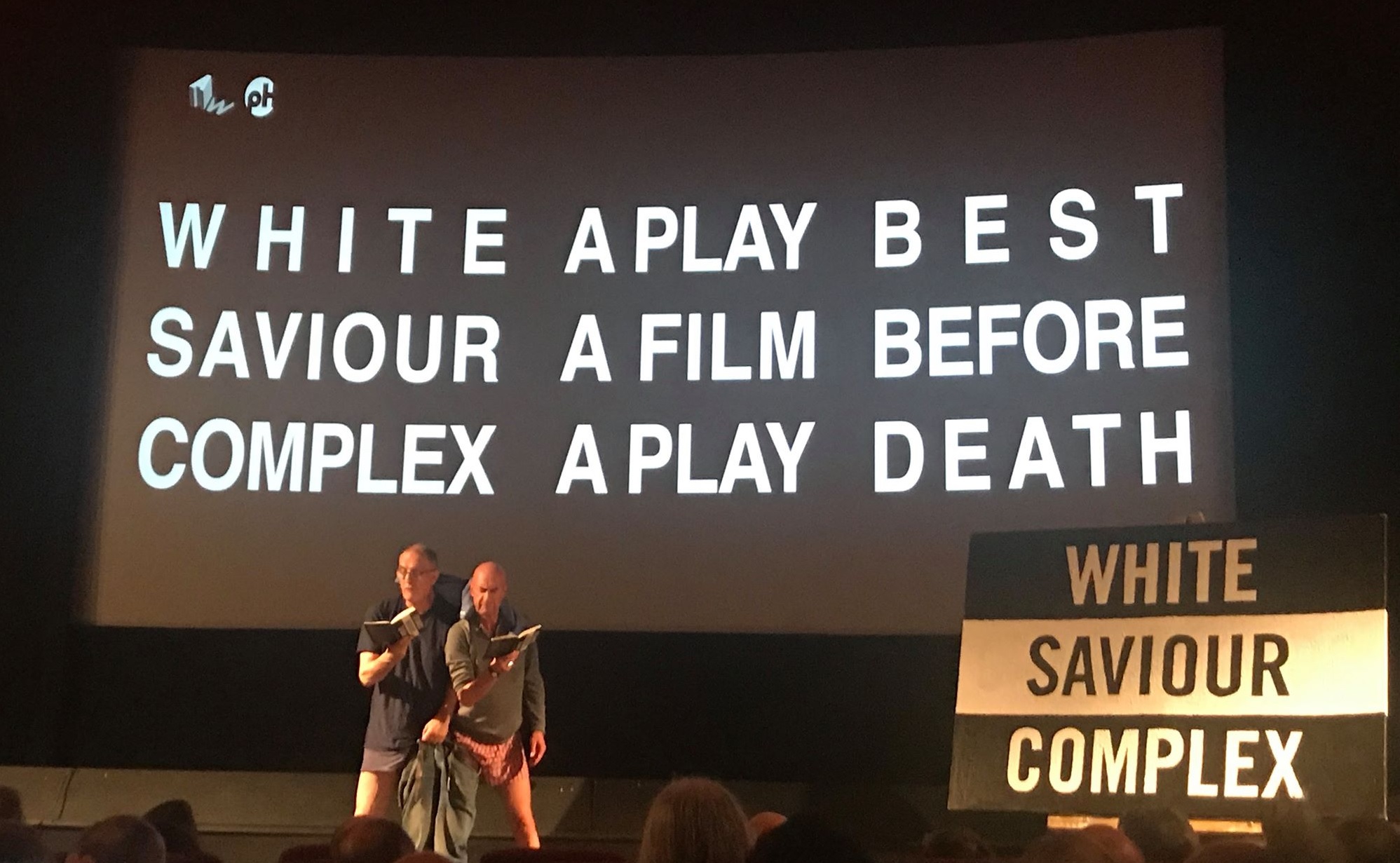 In the ‘Best Before Death’ film, Bill is regularly being photographed with the locals by his companion Tracy Moberley, whilst being filmed by Director Paul Duane. It’s an absorbing documentary and sees Drummond sourcing the raw materials for things, that he has to carry himself, such as food ingredients and wood for his self-imposed work. He bakes cakes in Kolkata and delivers them with the help of local ladies to certain designated points on his ‘cake wheel’ map, where the cakes are given away for free. This seemed to be an easier task in Kolkata, than in Lexington, and the American’s were more dubious as to his ‘non-existent real motivations’.

He also skilfully built two single beds from scratch, one per location, and drew a raffle and gave those away free as well. It was charming to note that in the USA, the locals were being drawn to the new local skilled craftsmen and families were just hanging out with “Man Making Bed” on his front lawn. There was also some soup making and some hit and miss shoe-shining as well.

From the outset of the film I was wondering…How did he work out the chores?…and How did he choose the places? Then as time progresses, one learns that each location (city) had to have a meaning in his life. It’s as though there were certain sparks that went off in his memory, that he has to revisit certain locations because something had previously occurred to him there. It’s akin to returning to your favourite holiday destinations one more time before you pass away. ‘Best Before Death’ is named after Drummond’s belief that the World Tour, scheduled to end when he’s 72, is a race against his own mortality. At the end of the film, we briefly see the full list of Bill’s chosen destinations with accompanying dates, these included Papua New Guinea, Jerusalem and Damascus, Syria.

Cue the return of Drummond and Burn for part two of ‘White Saviour Complex’, where further extracts were read and certain things were explained (or not) and jeans were shared!

An enjoyable evening into the complex world of Drummond – the artist!

Further confusion can be located in THESE PAGES. 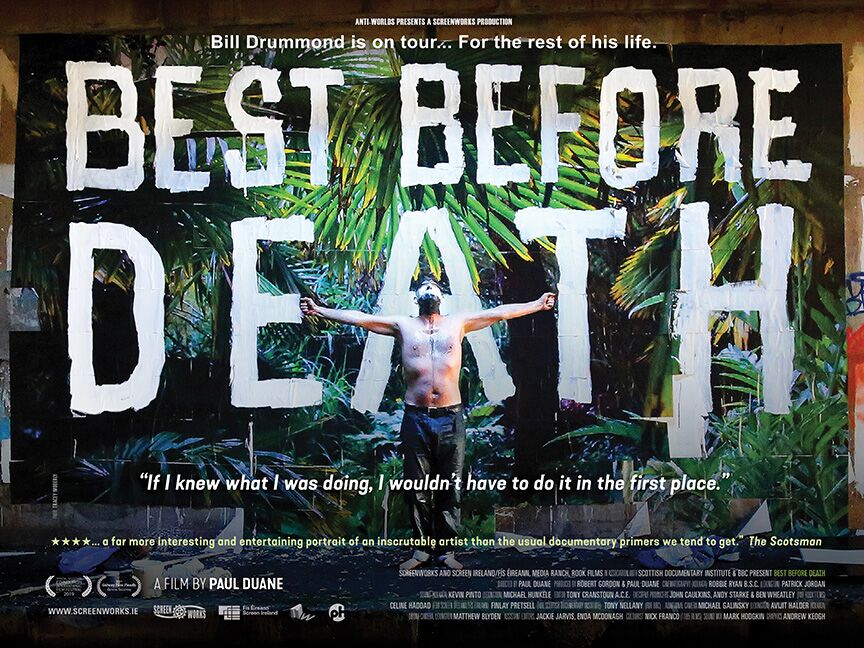