Two men have been convicted of burgling a Brighton coffee and stealing a till and a charity collection pot in the early hours of yesterday (Thursday 10 October). 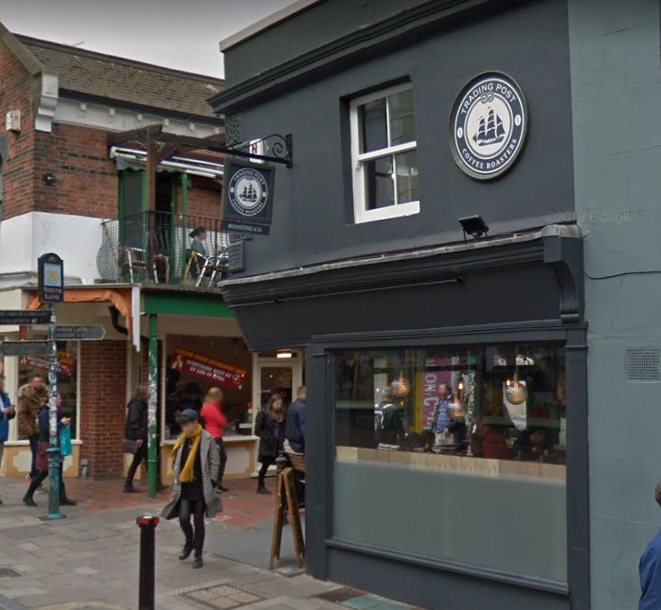 At Brighton Magistrates’ Court today (Friday 11 October) they were told that they will be sentenced next Wednesday (16 October).

Sussex Police said this afternoon: “Two men have been convicted of a break-in at the Trading Post Coffee Roasters, in Kensington Gardens, Brighton.

“Police responded to an intruder alarm at the premises about 2.12am on Thursday 10 October.

“Officers arrived at the scene and discovered the front entrance to the premises had been smashed and a till drawer containing a small amount of cash had been stolen.

“Also missing was a charity collection pot containing an unknown quantity of cash.

“Stephen Fidler, 43, unemployed, of no fixed address, and Mark Kaid, 39, unemployed, of Regency Square, Brighton, were arrested and charged with burglary, to appear before Brighton Magistrates’ Court on Friday 11 October.

“Both pleaded guilty to the offence and are scheduled to appear at the same court for sentencing on Wednesday 16 October.

“Fidler was remanded in custody and Kaid was released on conditional bail.”

Detective Chief Inspector Mike Ashcroft said: “We are working hard to reduce instances of burglary in the city and will continue to work to protect members of our communities from this crime.

“We treat burglary as a serious matter and our prevention teams are working closely with the community to reduce the opportunities for criminals to commit these crimes.

“None of this is achieved without everyone’s support and I am grateful to all our partners, including Neighbourhood Watch and members of the community who work with us to reduce burglary and bring offenders to justice.

“We all have a part to play to help keep Sussex safe and I urge residents to follow police advice and keep their property secure so that they are not a target for burglars.”

Sussex Police added: “Last month, burglar Muhammad Ahmed was sentenced to a year in prison for eight burglaries in Hove during the summer.

“We will be getting more officers and PCSOs into Brighton and Hove as the newly recruited officers get through training and get on to the streets ensuring a more visible police presence across the city and providing a deterrent to burglars.

“We do need the public to help us and encourage anyone to report any suspicious behaviour or if you see a crime in action to contact us on 999 without delay.

“Operation Magpie targets burglars and both summer and Christmas campaigns aim to advise people on how to protect themselves and their homes.”

Love Tom Petty’s music? Then check out Vetiver prior to Brighton concert