A lifeguard who helped saved a boy from rough seas has been formally thanked by the mayor of Brighton and Hove. 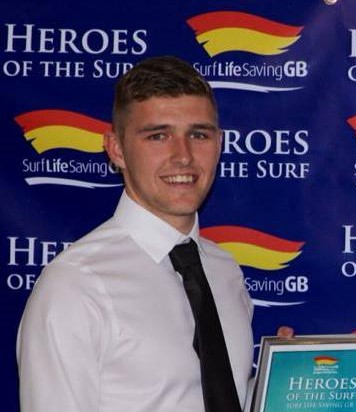 Ryan Pook swam out in treacherous conditions to a 13-year-old boy called Casper after the lad was swept out to sea at Black Rock, near Brighton Marina.

Mr Pook helped the boy to stay afloat and safe for 15 long minutes until the RNLI Brighton lifeboat reached the scene.

They were just 100ft from the shore and about 120ft west of the marina’s sea wall but the sea swell, crashing waves and high winds made a return to the beach too much of a challenge.

Two calm and quick-thinking 12-year-old friends, Tom Peppin and Miller Frith, also played a key part in the rescue, with Tom ringing 999 and Miller finding the nearest adults to ask for their help.

Mr Pook, who is part of Brighton and Hove City Council’s Seafront Team, which includes the beach lifeguards, raced to the scene on a quad bike.

Yesterday (Thursday 24 October) he was presented with a certificate of recognition for his actions at the meeting of the full council held at Hove Town Hall.

Mayor Alex Phillips said: “I would like to congratulate Ryan Pook, a Brighton and Hove lifeguard, who in early summer swam through rough waves and high winds to help rescue a 13-year-old.

“Despite the treacherous conditions at Black Rock, he was able to support and secure the boy in a rescue tube, reassure him and hold him clear of breaking waves.

“The seafront team are an essential part of our council services and much valued for the job they do keeping people safe.”

Mr Pook received his certificate alongside the deputy mayor Councillor Alan Robins, who chairs the committee which oversees the work of the council’s Seafront Team.

After the rescue, on Saturday 8 June, the helm of the Brighton lifeboat Daniel Gurr said that Mr Pook had fortunately reached Casper and had been able to keep him afloat.

Mr Gurr added: “A team effort from all emergency services saw a young boy’s live saved today as well as his rescuer.

“The conditions on scene were tough as this is one of our most dangerous areas for rescues due to the unpredictable waves.”

The council’s seafront operations manager Chris Ingall said: “I cannot emphasise enough just what an amazing rescue this was.

“Having been involved at the scene, it is difficult to express just what unfolded to save this young lad’s life.

“Without Ryan’s bravery and skill, together with the experience and judgment of the RNLI lifeboat crew, this could well have ended in tragedy.”

Casper was taken to the nearby Royal Sussex County Hospital and was kept in overnight. He was discharged the next day, having made a full recovery.