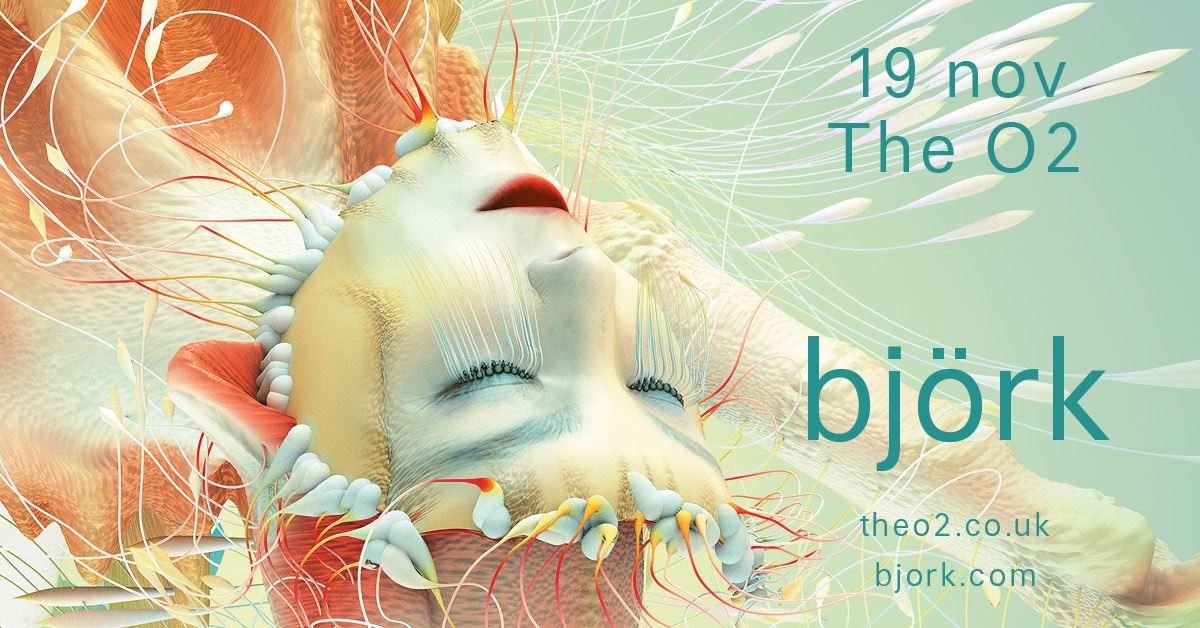 I have seen Björk Guðmundsdóttir aka Björk in concert quite a few times and each concert has been very different. For example, there was her appearance at the Phoenix Festival in 1996 when her entire set was accompanied by synchronised fireworks. By contrast, there was her appearance with The Brodsky Quartet at Islington Union Chapel in 1999, where the whole performance including vocals was completely unamplified. Tonight’s performance would be different again. Pre-gig publicity stated that the shows on her current tour were the most expensive that she had ever put on. Seemingly a spectacle was guaranteed.

The concert started in a very low-key manner, with an Icelandic choir dressed in traditional costume, standing at the front of the stage in front of a very colourful diaphanous curtain, singing what I presume were traditional folk songs. They entertained us for around half an hour. So far so underwhelming. 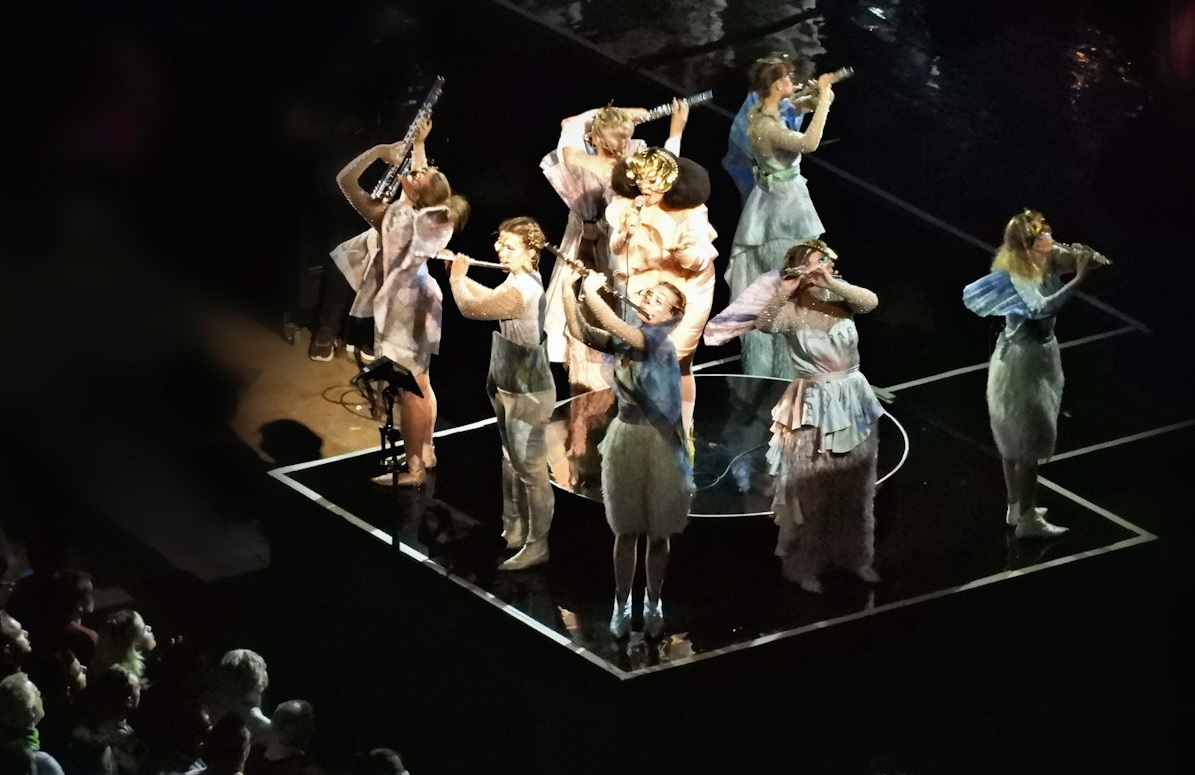 Then Björk started singing. That in itself is enough to cause a sharp intake of breath. Björk is in possession of not so much a voice as a spectacularly wondrous musical instrument. She is still behind the aforementioned curtain when the most incredible animated seemingly 3D projections appear on the curtain. In truth it is not one curtain, but a series at various points across the stage which are opened, closed, lowered and raised depending upon where the projections are required to be. The effect is fabulous in the extreme.

Okay, so the visuals are good, but this is a concert right? What about the music? Well, the choir re-appear early in the set, this time dressed in simple white outfits which, truth be told, make them look like members of a late 1960’s cult, or perhaps The Polyphonic Spree. The musical backing to this vocal extravaganza is provided by a drummer/percussionist, a keyboard player (who is presumably also triggering samples, such as birdsong, which is heard often tonight), a harpist and a flute sextet. Let it never be said that Björk lacks imagination when putting her live bands together.
Björk herself is in fantastic form. With her vocal talents she makes performing look easy. She stomps around uninhibitedly, and at one point she disappears into a little ‘building’ onstage where projected images appear to show her singing a capella. Her face seems to be made up similarly to how she appears on the cover of the ‘Utopia’ album, which an ornithologist friend of mine assures me are the colours of the puffin.

‘Utopia’ album by Björk (click on images to enlarge!)

The set itself consists of almost the entire ‘Utopia’ album, (with the exceptions of ‘Paradisia’ and ‘Saint’) which is perhaps bad news for any casual fans hoping for a greatest hits set. Indeed, some people start to leave from around halfway through the set. More fool them. Björk is an artist, and her concerts are indicative of where she is as an artist at that particular moment.

Oldies are particularly thin on the ground, and when they do appear their treatment makes them sound very different from their recorded counterparts. In my opinion this is a good thing – it keeps the songs fresh. For example, ‘Venus As A Boy’ from ‘Debut’ is solely accompanied by flute and birdsong. ‘Hidden Place’ from ‘Vespertine’ is performed with only choral backing. The only older song that sounds like the original is ‘Pagan Poetry’ from ‘Vespertine’.

However, tonight isn’t about oldies, it’s about Björk’s most recent album ‘Utopia’, and it has been presented in the most incredible manner. The lyrics on ‘Utopia’ often address nature and the environment, speaking of “toxic tumours” below the Earth.

It is no surprise then when after the main set a filmed address from the Swedish environmental activist Greta Thunberg is shown, to great applause. Björk returns with ‘Future Forever’ from ‘Utopia’ and ‘Notget’ from ‘Vulnicura’. A thought provoking end to a superb show. Björk concerts are works of art in their own right. If you allow it to happen, the performance will take you to an altogether different place, but you have to allow yourself to approach the show with a minimum of preconceptions. This was a truly imaginative production. I can’t help but wonder what Björk will do next time……

Official photos from the show can be found HERE. 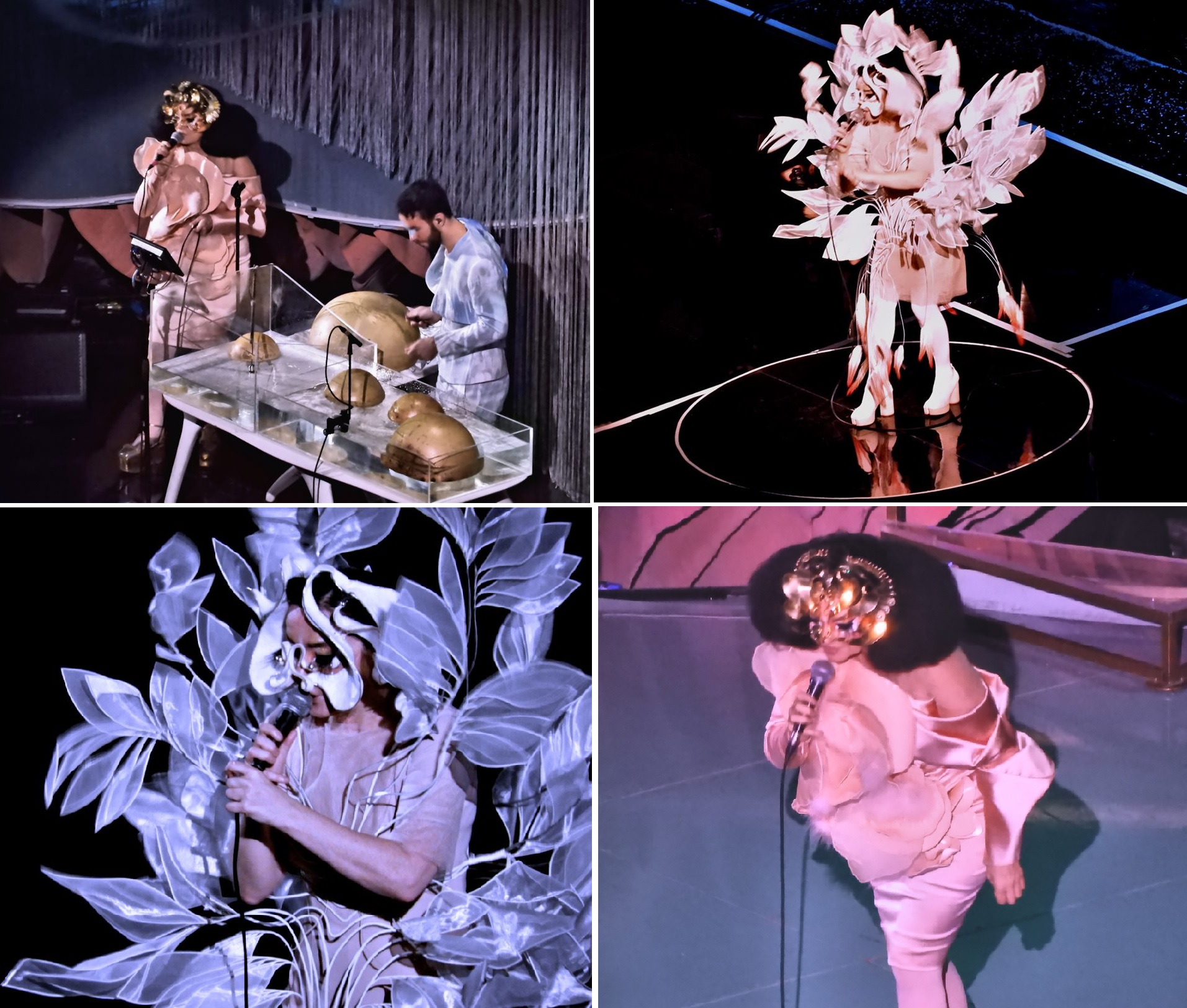 Further information on Björk can be found at www.bjork.com 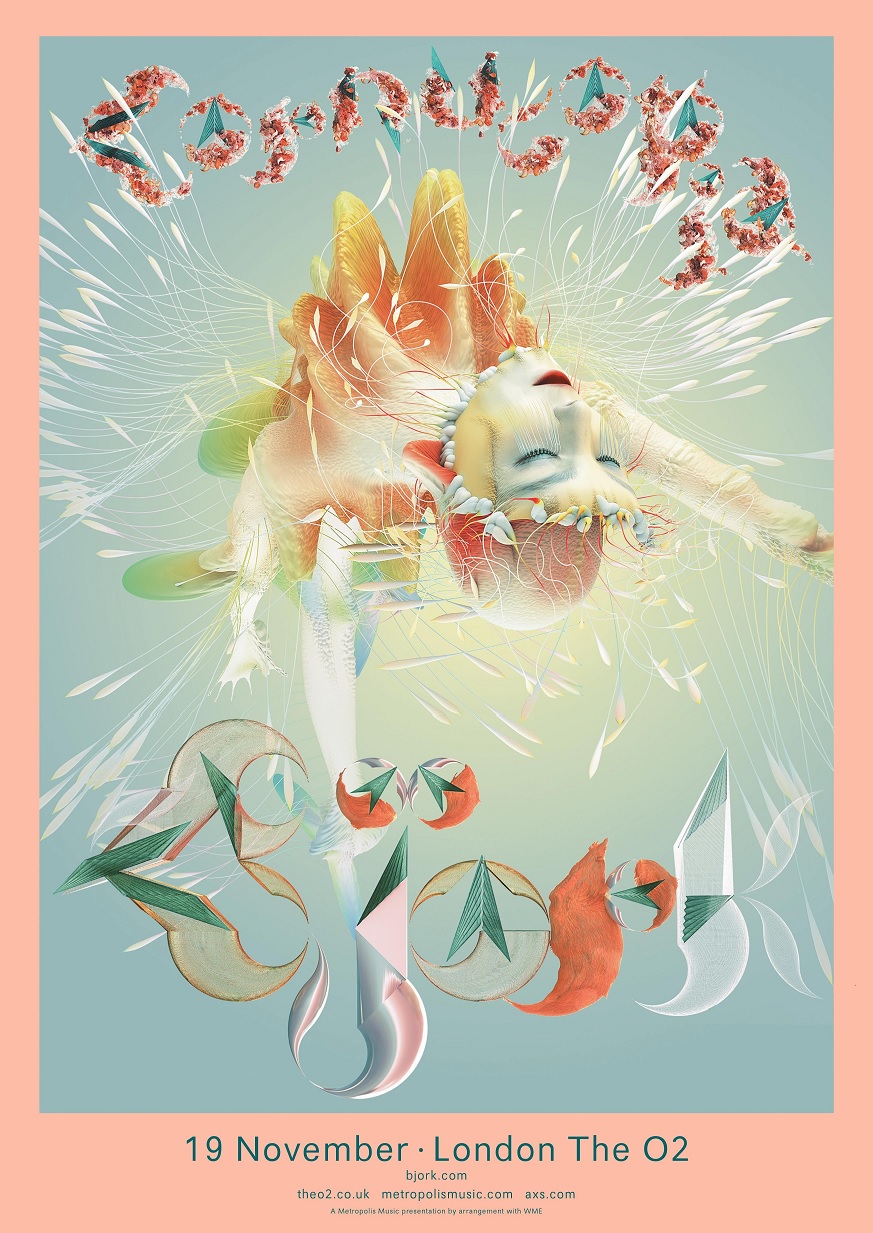