Getting out and about was a hot topic for general election candidates at hustings for people with learning difficulties.

Candidates standing for election in the Brighton Pavilion, Brighton Kemptown and Hove parliamentary constituencies spoke at the event.

It was hosted by the Grace Eyre Foundation and organised by Brighton and Hove Speak Out’s Being Heard in Government Group.

They were joined by Liberal Democrat Paul Chandler who had planned to stand in Brighton Pavilion but pulled out as part of a deal between Remain supporting parties, and Tara-Mary Moore, from the Brexit Party, standing in for Brighton Kemptown candidate Graham Cushway.

The atmosphere was relaxed at the Purple Playhouse, in Montefiore Road, Hove, as candidates introduced themselves before mingling with the audience.

Ollie Sykes, a former member of Brighton and Hove City Council, who works for the Environment Agency, was asked about the Green policy of universal basic income and what needs to be done for the environment.

He said: “People have been telling us they like the great outdoors. It’s important for them and they want to see the natural environment looked after.

“I’ve also been asked about specific policies for people with learning difficulties. We have a number of strong policies including increasing access to the political system, making it more accessible such as job share politician roles.

“There is a UN declaration on the rights of disabled people and we want to enshrine that in UK law, too.” 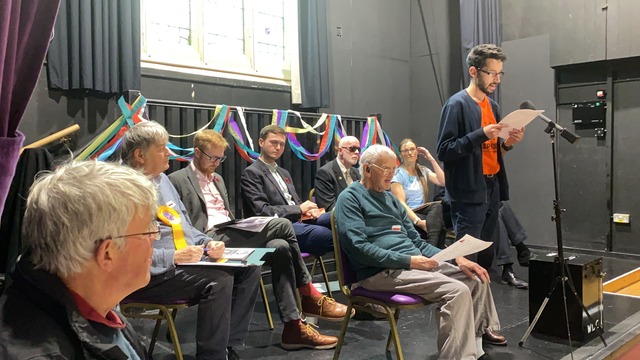 Liberal Democrat Paul Chandler withdrew as a candidate in Brighton Pavilion as part of the Unite to Remain pact to prevent splitting the pro-European Union (EU) vote in the constituency.

He said: “The people here want to remain. I’ve been asked if we’ll need visas. There’ll be a cost and we might not need to go through bureaucracy, but if you’re a family of four going on holiday it might add £50 to the cost.

“He has a substantial majority and people can safely vote for the Lib Dems without letting in the Conservatives.

“In Pavilion where the Conservative has Brexit and UKIP, to split that vote, there’s a real chance the Tories could lose their deposit.”

Conservative Joe Miller said: “There have been some really good questions about people’s disabled bus passes not starting until 9am.

“That prohibits young disabled people being able to get to work on time and go to college.

“OAP passes I can understand starting at 9am but disabled passes should start earlier to enable them to facilitate work.

“If we want to be a fully inclusive society with inclusive workplaces we need to allow disabled people and people with learning disabilities to reach their full potential and get to work on time.”

Labour’s Lloyd Russell-Moyle was also questioned about bus travel, particularly the Freedom Pass, by members of the audience.

He said: “We are going to make travel free for people under 25 and for carers and that was very reassuring.

“People want to get out and see and do and take part in the community.

“There’s also been good questions about cars parking on pavements. This is a bill that’s been in Parliament for four years, before I joined. It’s still not being progressed forward.

“It is supported by all the major disability charities. It was drafted by the RNIB.

“Wheelchair users just can’t get through and they’re being forced on to the road because there’s not a drop kerb. They’ll end up falling out of their wheelchair and end up on the floor.

“This could easily be stopped by making it illegal. The powers exist in London already.”

Tara-Mary Moore, from the Brexit Party, said that she was asked what would happen to European carers.

She said: “The answer is nothing. They have had their rights to stay guaranteed.”

Miss Moore spent 25 years of her life living in Spain after moving there aged three.

She experienced a traumatic brain injury when she was 14 and told the audience that she understood the challenges that they faced.

“I understand more than most people why we have to get out of the union, not Europe, but the union.

“We have to break free of their rules and regulations.”

Nigel Furness, UKIP’s national spokesman for disabilities and equality, said: “People are rather surprised that UKIP is so much to the left, but we’re not anything in terms of health and environmental issues.

“We don’t do isms, we call ourselves the common sense party.

“Who can tell what’s left, right or centre anywhere these days.”

A former member of the Conservative Party, he told the audience he came up with the idea of right to buy, but did not expect an end to council house building.

Live tweets from the event from the Local Democracy Reporting Service can be seen on a Twitter collection here.

Dredger sank fishing boat while skipper was distracted by WhatsApp