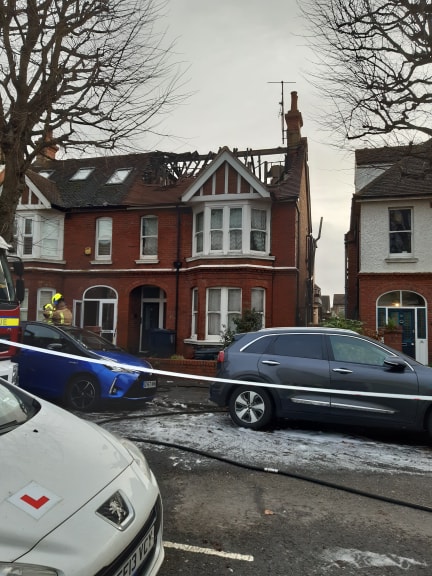 Damage to the roof of the house in Leicester Villas. Picture by Karen Young

A blaze at flats in Hove which four people were rescued from on Tuesday was caused by a candle.

Fifty firefighters from across Sussex were called to Leicester Villas in the early hours of Tuesday morning.

Three adults and a child were resued from the fire, which badly damaged two houses, one of which had been converted into four flats.

East Sussex Fire and Rescue Service have warned others of the dangers of candles.

Station manager and fire investigation officer Pup Upton said: “Candles may seem a harmless aesthetic addition to your home but if left unattended, they can cause a serious house fire, resulting in personal injury, property damage, or even worse.

“We can’t stress enough how important it is to follow safety advice to avoid becoming a statistic.

“Some people are unaware that if you do not place a candle in a heat-resistant holder and on a stable surface that the heat can quickly burn through plastic, or other material, creating a fire which could quickly become out of control.

“If a naked flame is placed too close to curtains or home furnishings then a fire can quickly take hold and rapidly spread throughout a home.

“It is so important to remember to extinguish candles when nobody is in the room, or when going to bed to ensure they have been fully extinguished.

“Also, it is imperative to fit a working smoke alarm to give you the best chance of escaping should there be a fire in the home.”