Vetiver plays to sold out crowd in Hove 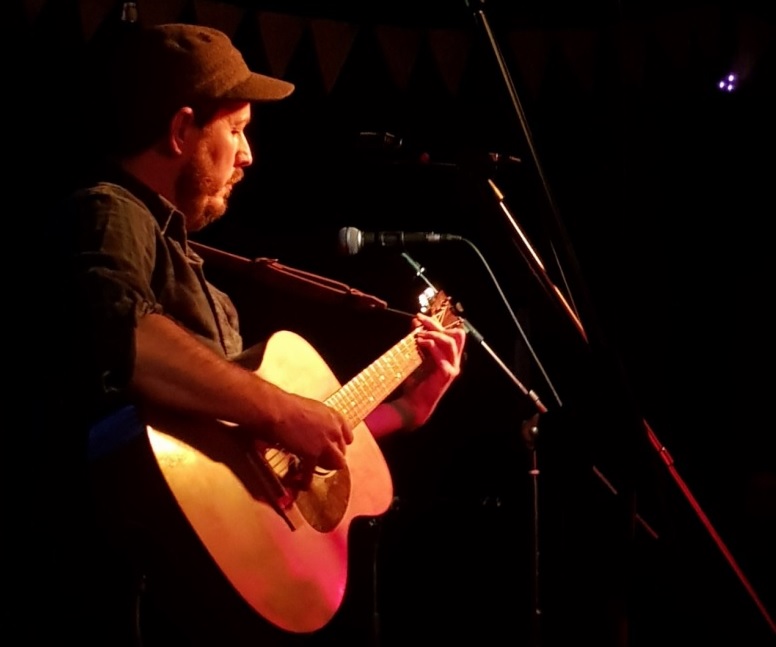 Hailing from San Francisco, California, Vetiver, normally a four-piece folk band who have been playing and touring together since 2002, were last night distilled down to Andy Cabic, lead singer and songwriter, who played an acoustic solo set at The Brunswick Tavern in Hove. The audience were hungry for some soothing escapist music on this dark day in the countdown to Christmas and that is exactly what this sold-out gig provided.

Cabic was previously a member of The Raymond Brake, an indie-rock group from North Carolina, and if he’s not busy composing a new song, he’s playing bossa nova and house DJ sets in clubs, or helping curate a compilation of Japanese City Pop. Cabic loves nothing more than to experiment with sounds and collaborate with Thom Monahan, long time sound engineer, giving his songwriting flexibility and an organic quality.

The packed, hot venue eagerly awaited Cabic’s first tune, ‘Good Place’, a very pretty, soothing song, with the emotive lyrics “Good day to go fishing and catch the sunset in the hills”, which summed up the feelings inspired by this song. ‘Rolling Sea’ brought everyone that relaxed, warm feeling you get after a long day on the beach, filling your skin, clothes and soul with fresh air, Cabic’s voice was gentle and chilled, think Donovan combined with JJ Cale’s laid-back vibe. ‘Up On High’ was a gentle, dreamlike song which Cabic/Vetiver had written with a friend in Mendocino, California, this and ‘Pardon’, were my highlights of his well-balanced set.

‘Maureen’ was a very sweet love song, not insipid, but, like all his lyrics, poignant and lyrical and was followed by other more rousing songs including a cover version of Suzanne Vega’s ‘Gypsy’ and a new song ‘A Door Shuts Quick’.

The quiet and gentle songs changed as time went on to become more rousing, but all had the Vetiver inimitable style: the smell of freshly cut, aromatic grass, (the meaning of the word ‘Vetiver’) on a cliff top in the sunshine. Vetiver provided escape, we floated away into the blue with his songs, just what the appreciative audience needed on a dark, damp Sunday evening in Hove.

Cabic, aka ‘Vetiver’, is currently on an extensive European tour promoting ‘Up On High’, the band’s latest album.

Vetiver setlist reads:
‘I Must Be In A Good Place Now’
‘Rolling Sea’
‘Angels’ Share’
‘Up On High’
‘Hard To Break’
‘Wanted, Never Asked’
‘Maureen’
‘Gypsy’ (Suzanne Vega cover)
‘A Door Shuts Quick’
‘I Know No Pardon’
‘To Who Knows Where’
‘Swaying’
‘Roll On Babe’ (Ronnie Lane cover), joined by Treetop Flyers
(encore)
‘You May Be Blue’ 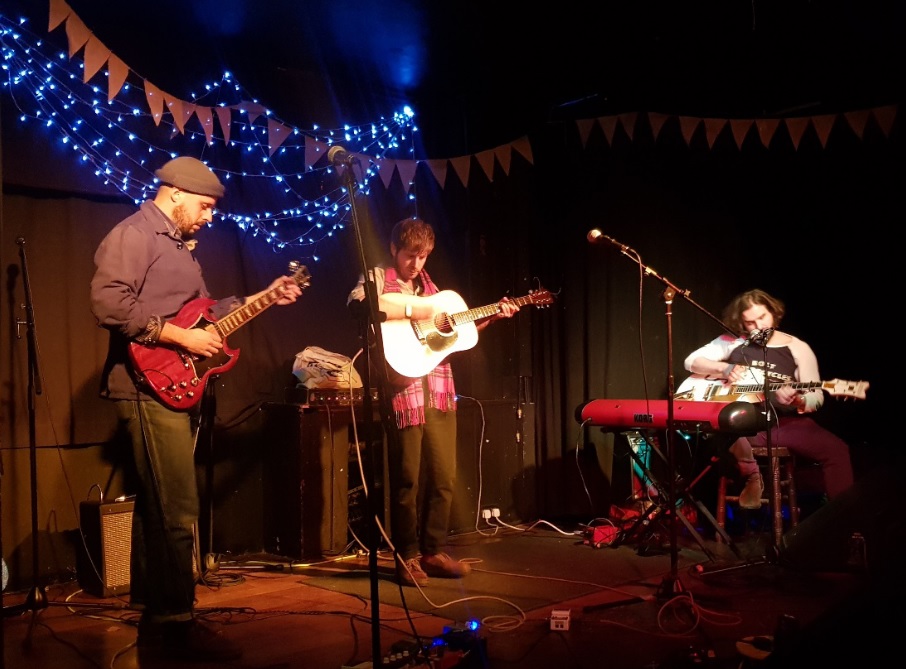 Second on the bill were Treetop Flyers, an English folk rock band of three from London: Reed Morrison, Sam Beer and Laurie Sherman. Their debut album, ‘The Mountain Moves’, was released in 2013 and its production followed their winning the Emerging Talent competition at Glastonbury in 2011.

Last night the three sang a mix of their own songs, standouts being ‘Things Have Changed’, with lovely additional harmonies from Beer and Sherman, ‘I Knew I’d Find You,’ a personal favourite, ‘Needle’, ‘Is it Worth It?’ plus one cover of Jim Ford’s ‘Sound Of Our Times’, a soulful number which showcased Morrison’s distinctive vocals. The nice guitar playing from Sherman gave the songs at times shades of ‘The Faces’ and indeed, the band later joined Vetiver on stage for a lovely version of Ronnie Lane’s ‘Roll On Babe’.

The mixture of vocals with Morrison’s lead plus Sherman’s very pleasing guitar breaks made for a great set prior to Vetiver, these guys need their own tour again next.

Find out more at treetopflyers.co.uk 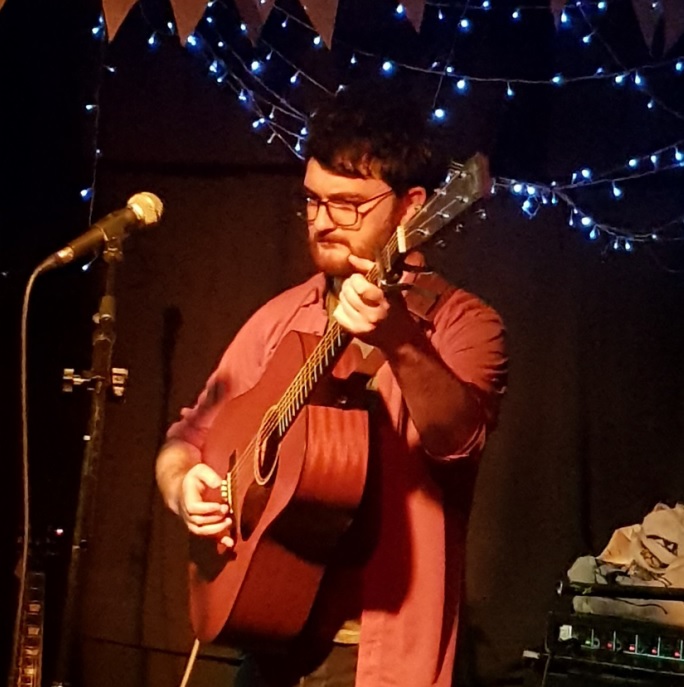 First on the bill was Jacko Hooper, who is a Brighton resident, and singer songwriter who, in his own words “combines acoustic noodlings with a soulful, emotive voice”. As I listened to his first song, ‘Beg, Steal Or Borrow’, I realised that, despite looking like Daniel Ratcliffe’s older brother, his strong voice sounded at times like Gene Pitney, soaring with great clarity, with an unusual phrasing. His self-penned numbers ranged from ‘What Do You Need?’, ‘Sink Or Swim’, about the sad lot of a singer songwriter, to ‘Run Away With Me’, a song Hooper normally sings in a duet with accompanying harmonies, and ‘I Love You, You Bastard’, about a successful singer songwriter who still found reason to complain about his life.

He sang a very good set of five of his own songs and provided great early support to Vetiver and Treetop Flyers.

Find out more at www.jackohooper.com 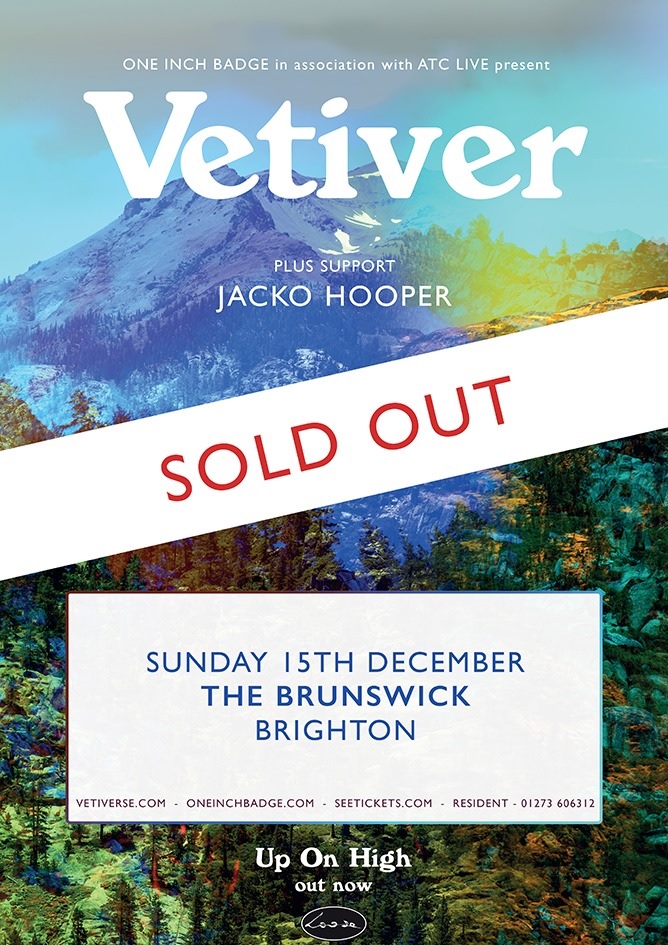