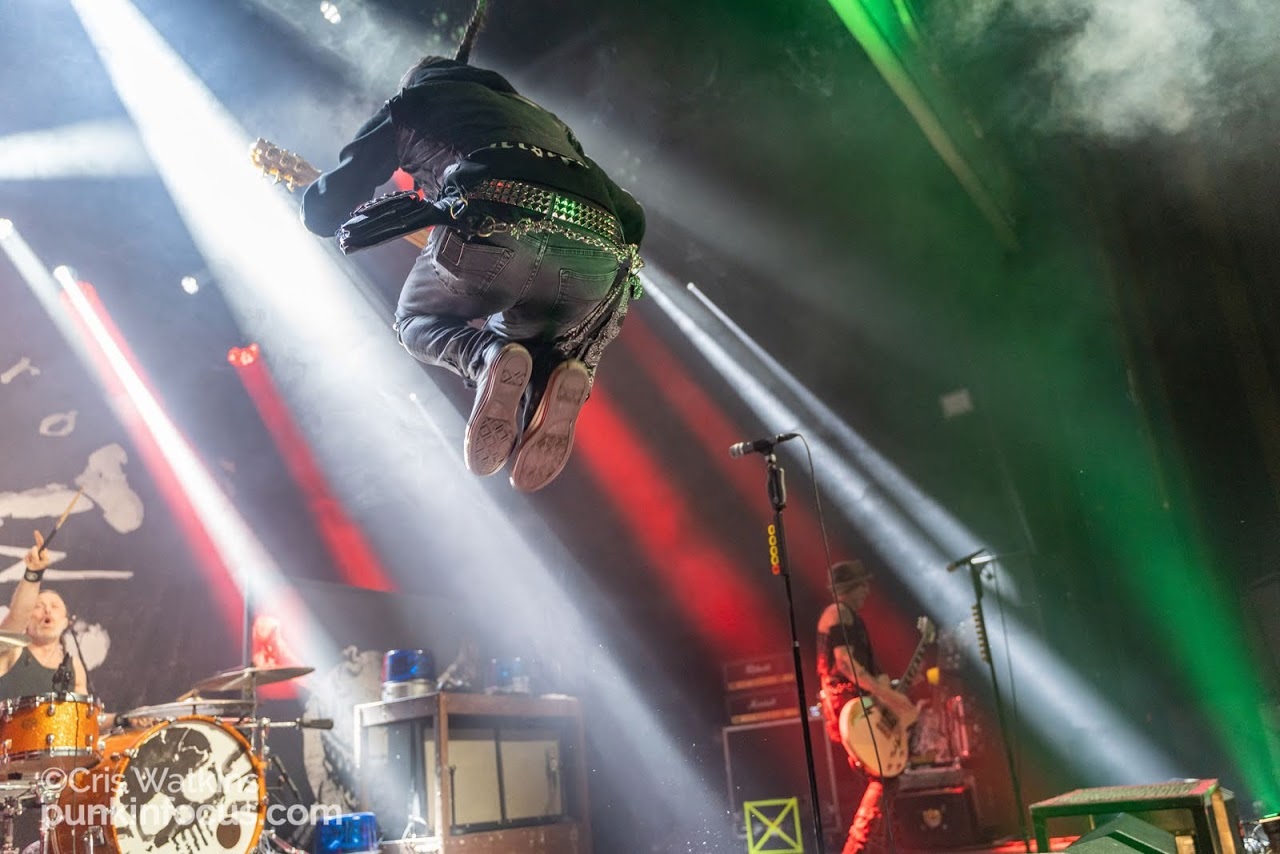 Something special is happening in Kentish town tonight, and you can certainly feel the buzz in the surrounding bars and outside the O2 Forum.
Rock stalwarts, The Wildhearts and Backyard Babies are co-headlining the Forum, and I, for one, have dreamed of this coming together. These bands have been rocking my socks off for close to 30 years and to see both in one night certainly has the chance of blowing my mind. 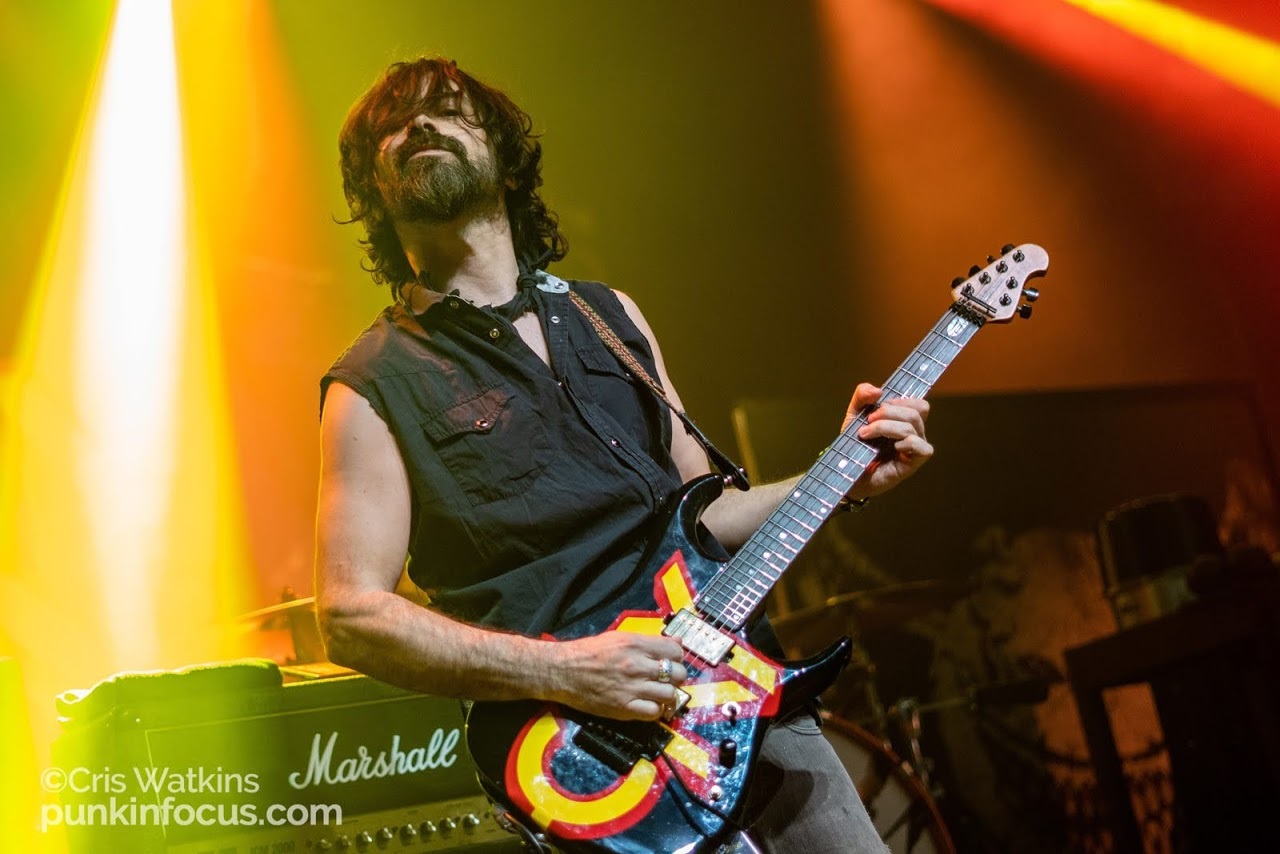 Kicking off are Pennsylvania’s CKY, and for a two-piece consisting of Jess Margera and Chad I Ginsburg on just guitar and drums, they sure make some noise. The venue is still only near half capacity as they storm through their set but ‘The Human Drive In Hi-Fi’, ‘Sporadic Movement’ and ‘Flesh Into Gear’ get a good few heads shaking. It may be early, but CKY has plenty of support in house, but it’s not until the classic riff of ’96 Quite Bitter Beings’ kicks in things go up a notch, this is one tune everyone knows. CKY are tight, loud and heavy and just the kind of opener tonight needed. 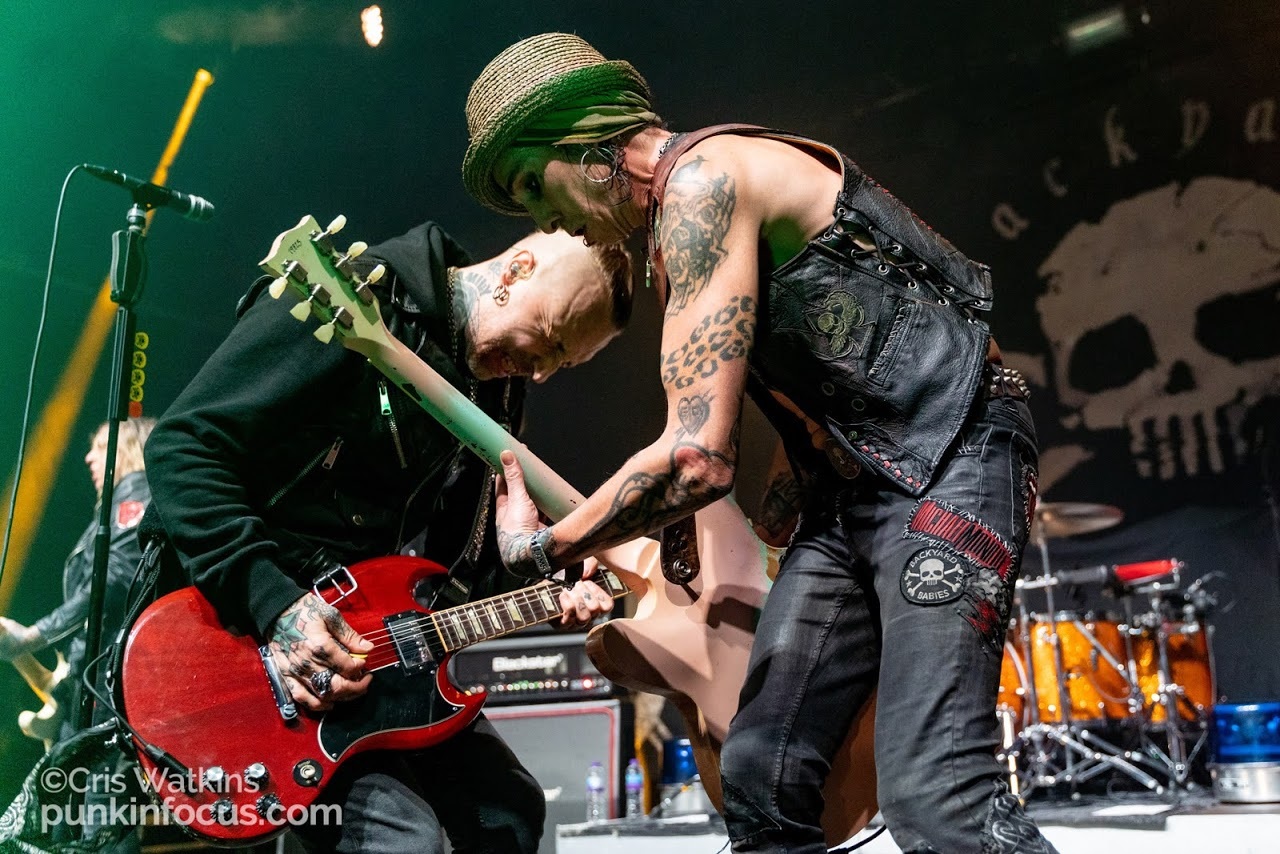 Riding on the wave of the new album, last year’s ‘Silver And Gold’ which smashed the charts in their homeland, Backyard Babies have joined The Wildhearts for a total of eleven dates, a four-show stint in Germany and the rest across the UK and judging by the reviews so far, tonight might be something pretty special.

Celebrating over 30 years together, the band consisting of Nicke Borg, Dregen, Johan Blomqvist and Peder Carlsson, have been rocking clubs and stadiums across the world and touring with ‘AC/DC’, ‘Social Distortion’, ‘Velvet Revolver’, ‘Motley Crue’ and ‘Guns n Roses’ to name but a few.

The Sex Pistols ‘Friggin’ In The Riggin’’ fills the air, and the capacity crowd pushes ever forward, making it a real tight squeeze for those upfront, as The Backyard Babies make their entrance. They explode onto the stage in a hail of blue police lights and smoke and head straight into an opening salvo of ‘Good Morning Midnight’, a ballistic ‘Th1rte3n Or Nothing’ and the anthemic ‘Shovin’ Rocks’. We are then treated to flawless run-throughs of Swedens’ finest rock and punk tunes with blistering versions of ‘Highlights’, ‘Star War’ and an unforgettable trip through ‘Nomadic’.

Backyard Babies live and breath rock n roll, it’s flowing through their veins, and they leave nothing in the tank tonight as they put on one of the most impressive shows I’ve seen in some time. They power through a good 15 songs, but still, the end comes far too soon for me ‘Minus Celsius’, ‘Brand New Hate’ and ‘People Like People Like People Like Us’ bring the set to a close. Backyard Babies maybe 30 years old but what they deliver tonight is as fresh and exciting as it ever was.

Every member of the band seems to put everything into the performance, whether it’s Dregen, seemingly showcasing every rock move in the book, Borg’s continual attempts at unmanned flight or the sheer power and style of the backbeat of Blomqvist and Carlsson it all comes together in something special. 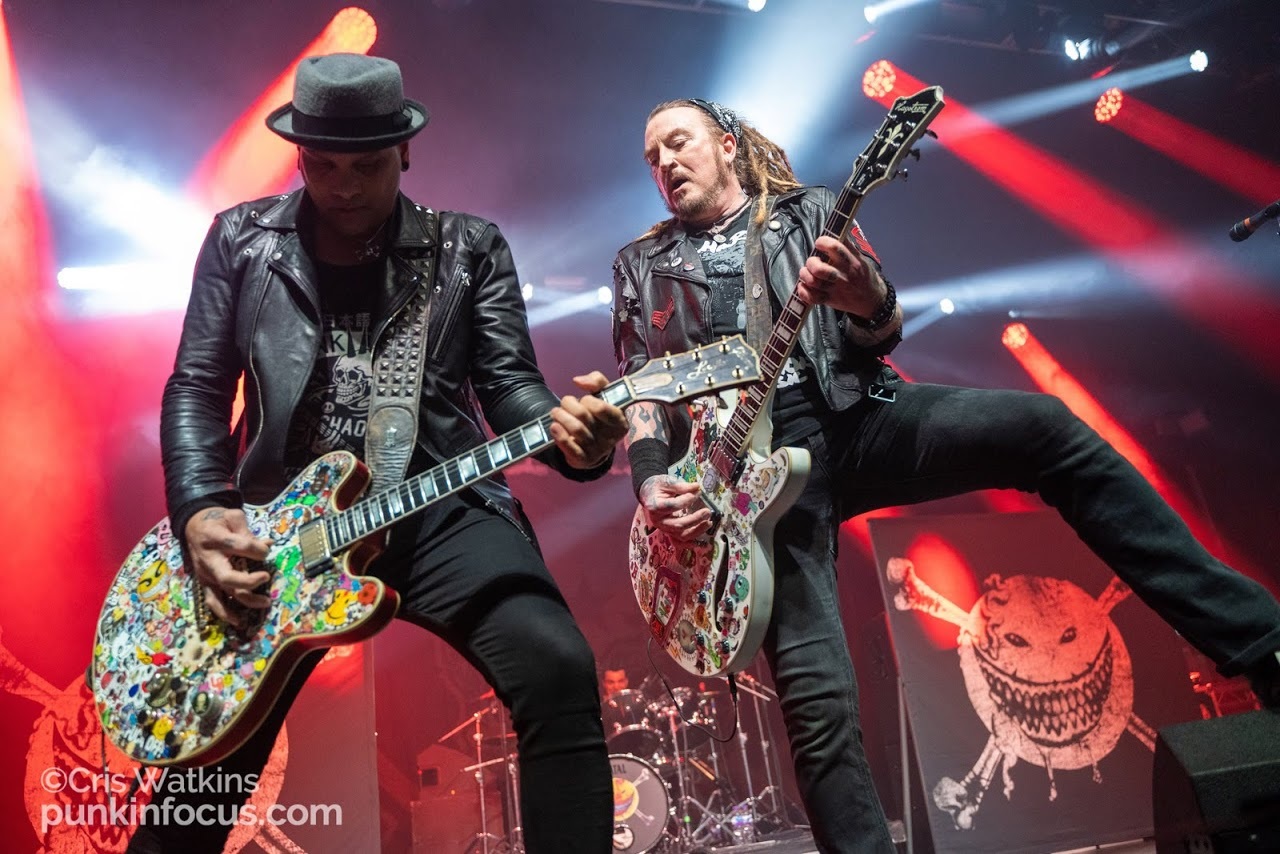 Barely have the crowd got their collective breath back and managed a trip to the bar when ‘Don’t Worry ’bout Me’ filters through the PA, which has the crowd singing their lungs out before The Wildhearts have even hit the stage. The air fills with anticipation, which quickly turns to unbridled excitement as the first few notes ring out, they kick off with a killer trio ‘Everlone’, ‘Diagnosis’ and ‘Vanilla Radio’, but it’s ‘Caffeine Bomb’ that lights the touch paper, and the pit goes boom! Bodies stream one after another across the top of the barrier all deftly handled by the venue security.

The Wildhearts are on fire this evening, bringing energy and passion that bands half their age would kill for. They deliver a career-spanning set which seamlessly melds the old with the new in one massive, glorious wall of sound.

Highlights are plentiful, newbie ‘Disconnected’, a monster of a track with a sweet sing-along chorus, it’s like being beaten alternately with a hammer and a candy stick. ‘Sick Of Drugs’ is welcomed with every arm in the building raised aloft and ‘I Wanna Go Where the People Go’ is just the anthem of the ’90s for me and always a special moment live.

The Wildhearts have somehow upped their game again tonight delivering in spades some of the most magnificent slices of hard rock on the planet. 2020 Wildhearts are harder and heavier than ever before, and there’s no sign of growing old gracefully.

The evening comes to a close with a stunning ‘My Baby Is A HeadF*ck’ which has the crowd in full voice and a rocking ‘Love U ’til I Don’t’. Tonight for me is already a contender for gig of the year, and we’ve only just grazed February.

The Wildhearts setlist:
‘Intro Tape (Don’t Worry ’bout Me)’
‘Everlone’
‘Diagnosis’
‘Vanilla Radio’
‘Caffeine Bomb’
‘Let ‘Em Go’
‘The Revolution Will Be Televised’
‘TV Tan’
‘Top Of The World’
‘Dislocated’
‘Sick Of Drugs’
‘My Kinda Movie’
‘I Wanna Go Where The People Go’
(encore)
‘Intro Tape (Don’t Worry ’bout Me)’
‘My Baby Is A Headf*ck’
‘Love U ’til I Don’t’ 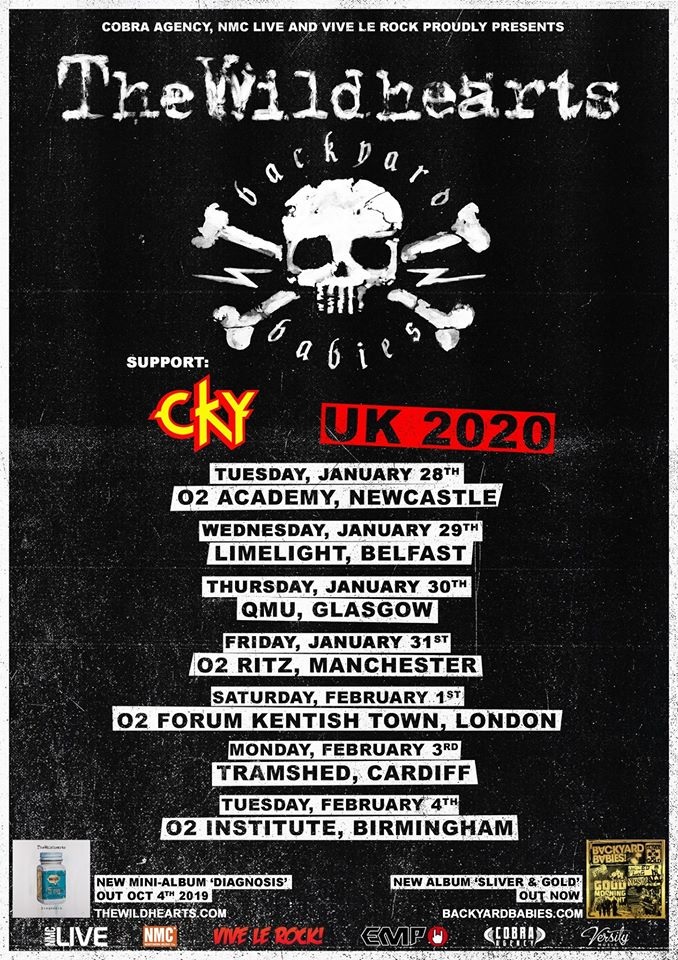