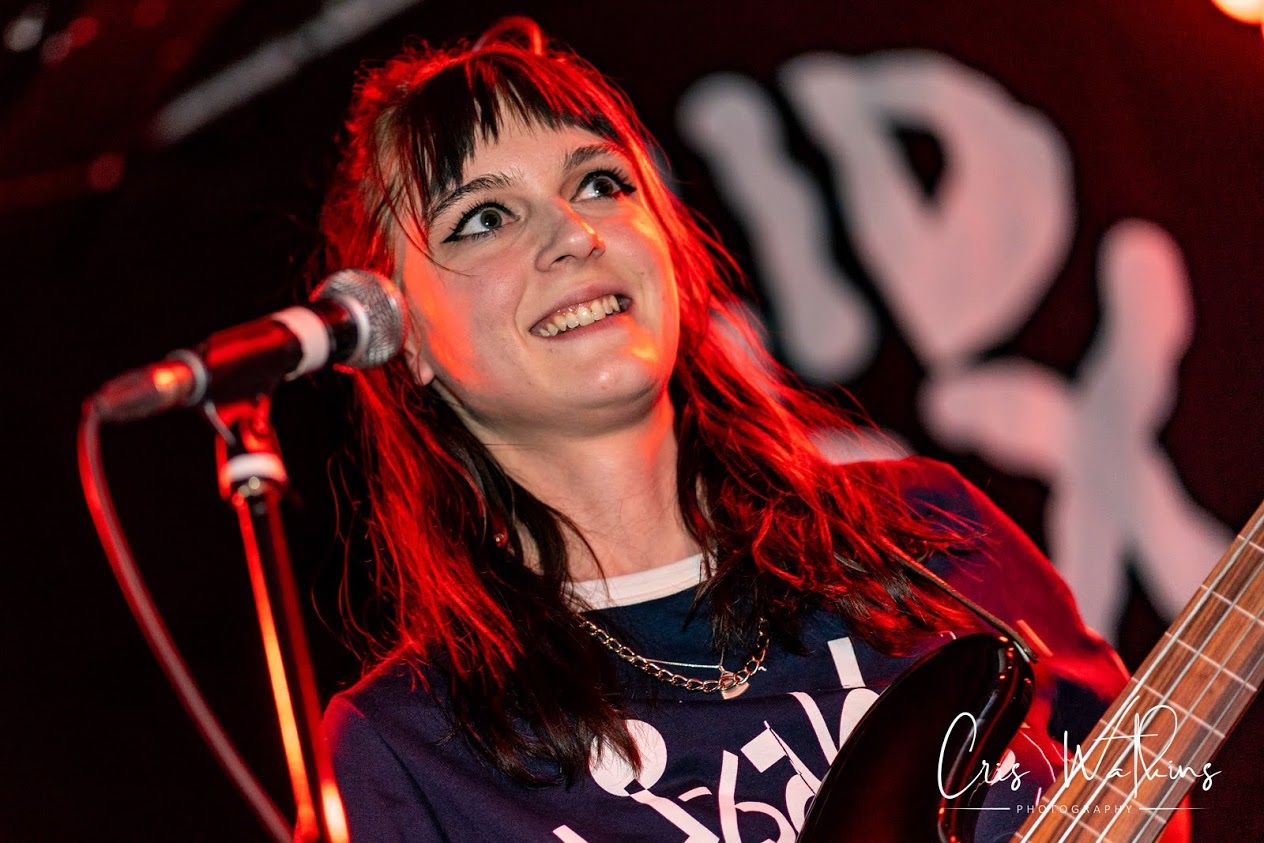 Los Angeles post-punk trio Automatic were appearing at The Hope & Ruin in Brighton as part of their 15 date European tour. The ticket sales had gone so well that this was an upgrade from the compact Latest Music Bar.

Since the release of their Stones Throw Records debut album ‘Signal’ in September, the band has soundtracked Hedi Slimane’s Paris Fashion Week show for Céline, toured the USA, and opened for legendary post-punk band Bauhaus’ reunion shows at the Hollywood Palladium. ‘Signal’ was chosen as an album of the year by Norman Records and Resident Music (who are in attendance this evening), who described it as “inventive, enticing and new”. Pleasingly, Automatic have covered ‘Mind Your Own Business’ by Delta 5, as the b-side of their ‘Calling It’ single, which came out last summer. I simply had to see Automatic just to hear ‘Mind Your Own Business’ and thankfully it got an airing tonight and was tantalisingly listed as “cover” on their setlist, so as not to give the game away!. 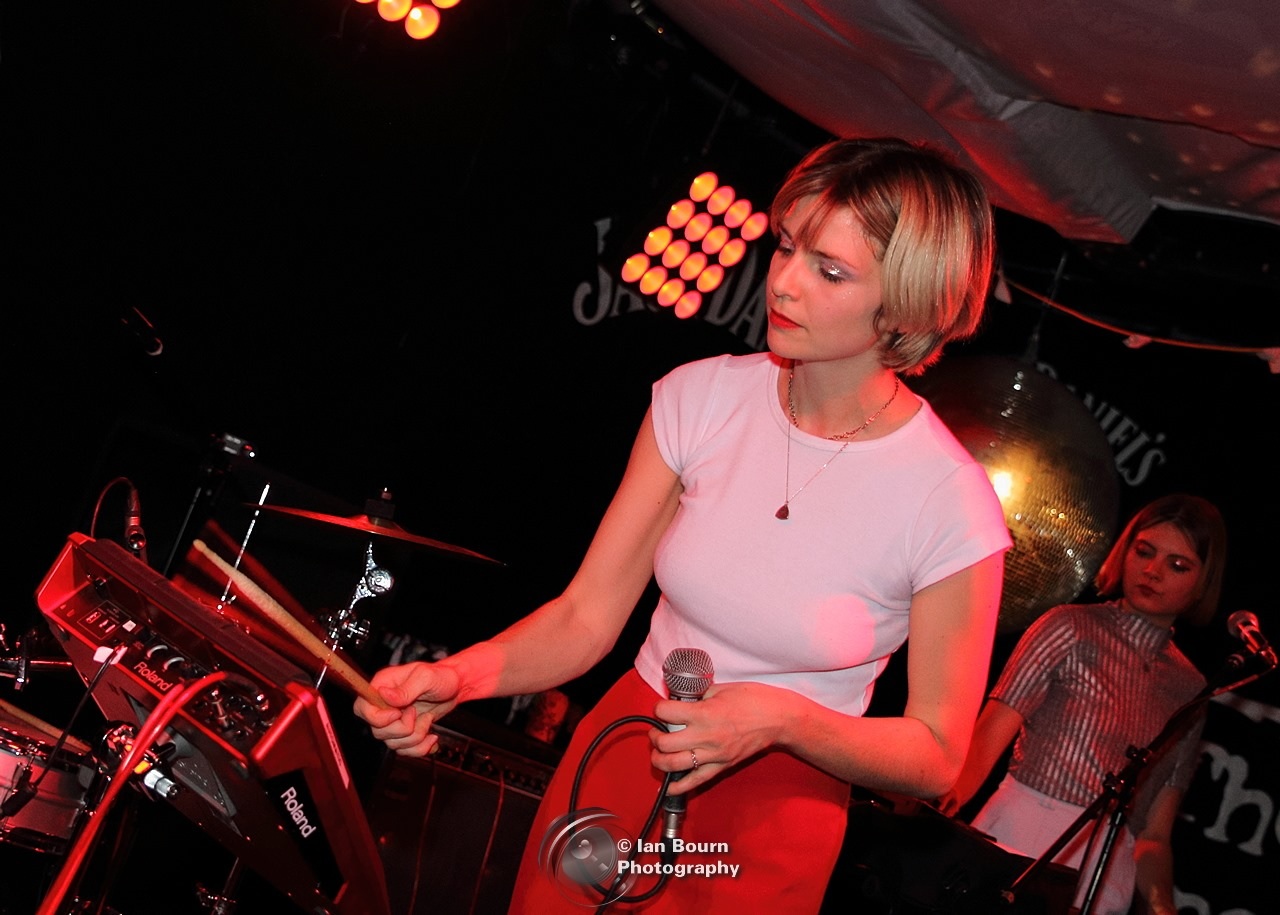 Automatic are composed of Izzy Glaudini (synths, vocals), Lola Dompé (drums, vocals), and Halle Saxon (bass, vocals). The band is inspired by an amalgam of dub reggae, motorik rhythms and gnarly synth work from bands like NEU! and Suicide. Add to that the eerie atmosphere of films by auteurs like David Lynch and Dario Argento and that’s basically where they are coming from.

The ‘Signal’ album is littered with the band members’ experiences, tied together by a sense of anxiety and alienation so common to life in the 21st century. ‘Humanoid’ echoes ‘Too Much Money’s sentiment on the disappointing falsity of social media, ‘Electrocution’ recounts a near-death freak accident singer Izzy experienced – alluded to on the album art – and the title track captures the feeling of being trapped in the drudgery of a mundane life “and the realization that nobody is going to rescue you from it but yourself.” As they put it: “The world is so f*cked up, we don’t know how any musician could say, ‘This is all peachy.'” 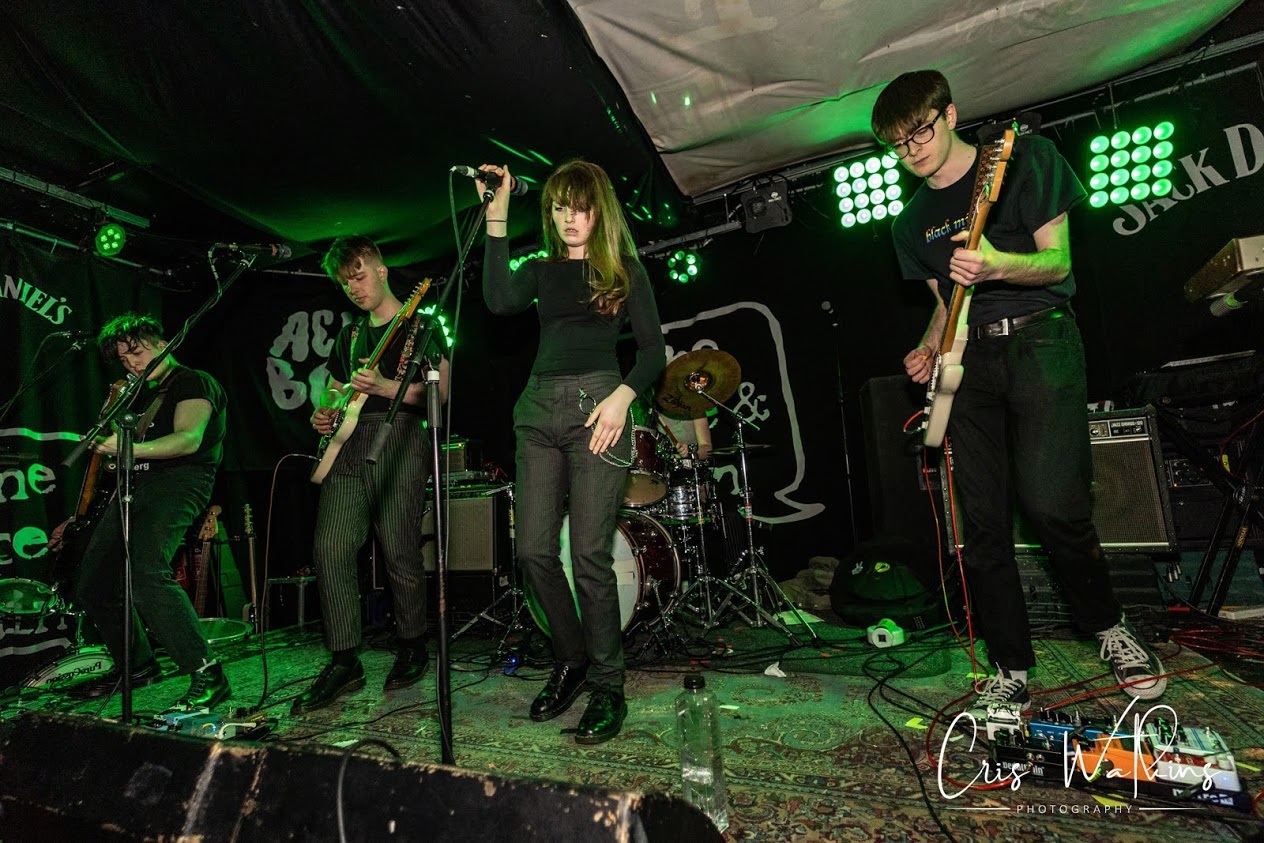 First up tonight at The Hope & Ruin were PoliteBuro who are an Alternative Post-punk hailing from Croydon, Bradford, and Surrey, who are now based in Brighton. PoliteBuro are Jasmine (vocals), Joe (bass), Tom (guitar and synth), Matt (guitar) and Pip (drums) and as they say “We write about today’s Britain”.

Interestingly enough, I was witness to drummer Pip performing only yesterday at the same venue in her other band, Swanmeat, where she is the vocalist. They were supporting BlackWaters – read our review HERE.

PoliteBuro are a fresh young outfit and this evening were clad in similar black and grey clothing, as to signal that they are one complete unit. Joe interestingly carries his bass just like Peter Hook does as in arched right over with his axe virtually touching the floor. His bass was best on track four, ‘Fades By’ and certainly does have that New Order edge. For the last two tunes, ‘New Surf’ (with its shouty chorus) and ‘Johnny’, Joe swaps his bass duties to headline the band on vocals, whereas vocalist Jasmine does the opposite, but supplies backing vocals. Personally I preferred Jasmine on vocals, it just seemed to fit better, but Joe did bring that raw edge to the party. Highlight of their set was most definitely song two, which was ‘Middle Child’. Pip’s drumming on this was outstanding and it was just like a lost Siouxsie & The Banshees classic. PoliteBuro have uploaded a demo of this onto Soundcloud – check it out HERE. I would like to see this band again! 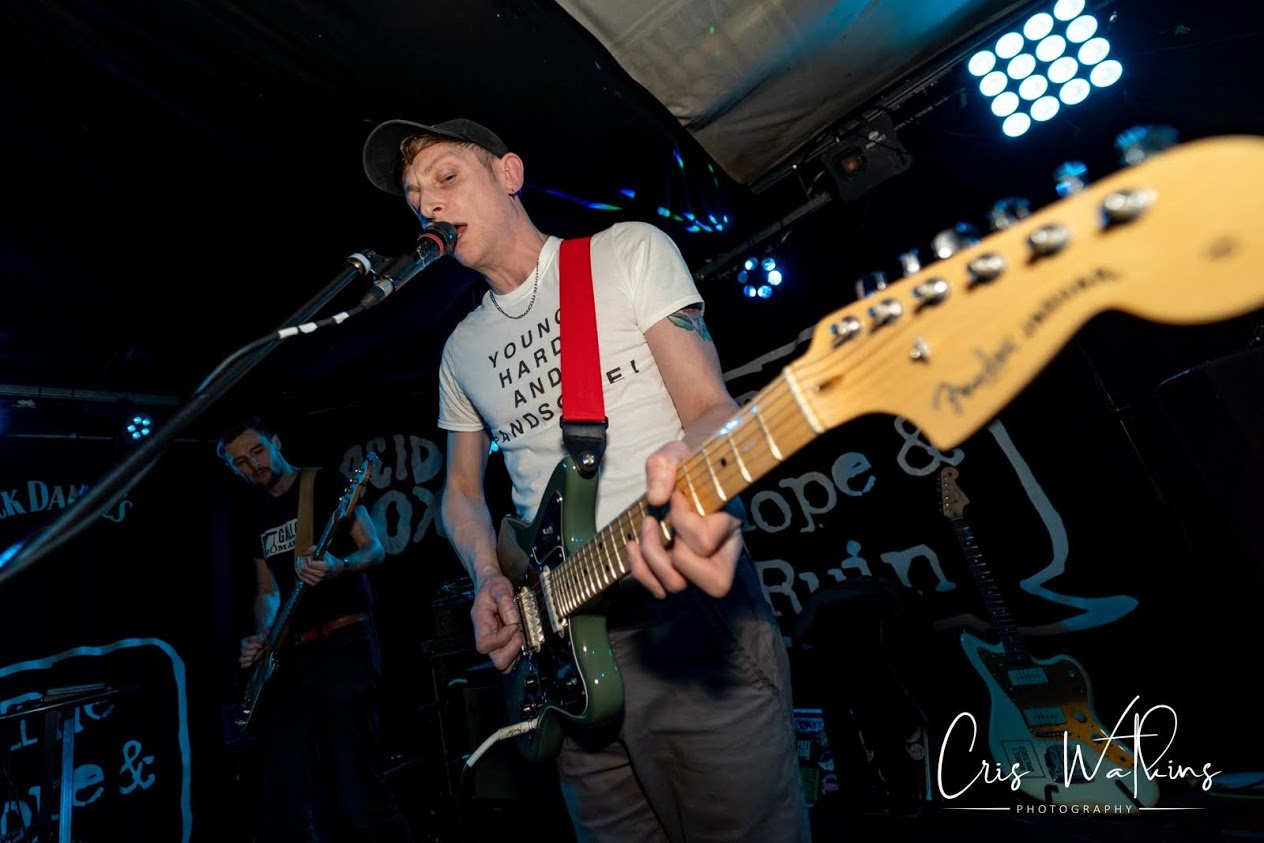 Second on the bill were a Brighton trio going by the name of The Family Faith which consists of Luke Brealey (guitar and synth), Joe Waghorn (guitar and vocals) and Martyn Lewis (bass).

I immediately recognised vocalist Joe as we had covered his performances in his previous band, Red Deer People, and had even reviewed their supposedly last ever concert on 14th June 2018 at the same Hope & Ruin – read our review HERE. However, my beady eye did actually spot a notification from Brighton Noise, which proudly announced that Red Deer People will be back in action at The Prince Albert in Brighton on Thursday 2nd April – purchase your tickets HERE.

Back with post-punk outfit The Family Faith and one immediately notices as they quietly take to the stage the lack of drums behind the guys. The reason being that they operate with the use of a drum machine controlled by Martyn, who is also on Korg and bass duty as well. This was only their second ever gig, with the debut being at The Prince Albert a couple of weeks prior.

They currently only have four songs and naturally they all got played tonight. They started with ‘One Hand Washes The Other’ which has a clopperty beat and Joe’s distinctive quirky vocal style. Song three made good use of the Korg in a very early Orchestral Manoeuvres In The Dark way. Their final number ‘Cheaper Then Gold’ (or is it ‘Cheaper Than Gold’?) is their fuzzy guitar number and went down the best, even though it was dragged out into a 12” extended version! Think of Penelope Isles ‘Gnarebone’ and you are along similar lines.

Find them on Bandcamp. 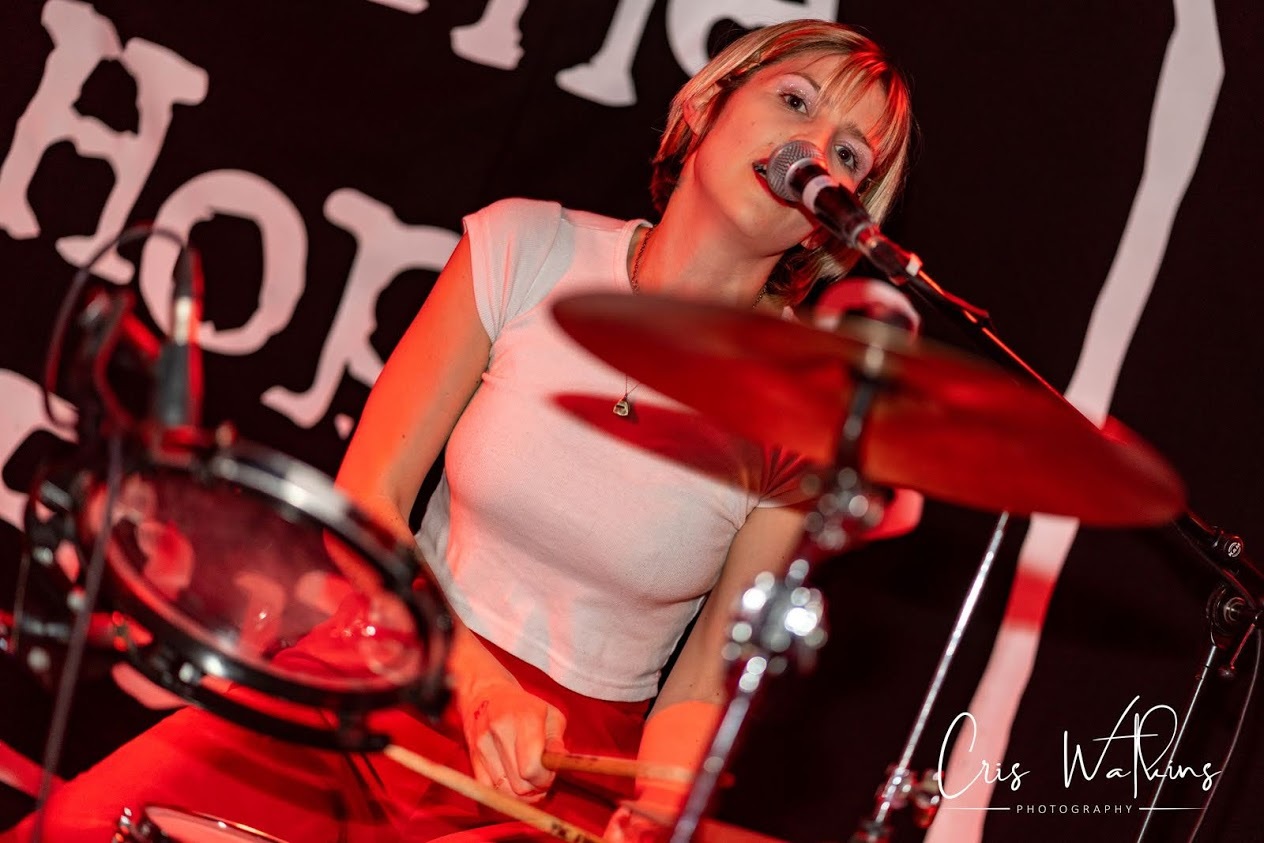 So now onto tonight’s headliners Automatic, who perform a dozen modern electronic compositions for the Hope & Ruin faithful during their 41 minute set (10:05pm – 10:46pm).

Prior to them coming on to the stage, the music on the public address was certainly getting punters in the mood. Of serious note were ‘M.E.’ by Gary Numan and ‘Straight To Hell’ by The Clash.

The stage was awash with a Dave Smith Prophet, a Korg, Roland drum machines, drums, and bass. Which were immediately put to great effect on their virtually instrumental ‘Highway’. It was followed by the Moon Duo-esque ‘I Love You, Fine’ which was sounding great, especially Lola’s drums, who incidentally is one of Kevin Haskins drummer of Bauhaus daughters. Song three arrived, ‘Electrocution’, which seriously sounded like the golden days of The Cure. It was here that the girls informed us that they had come across to the UK on the ferry boat in the storm! Sod that for a bunch of soldiers! 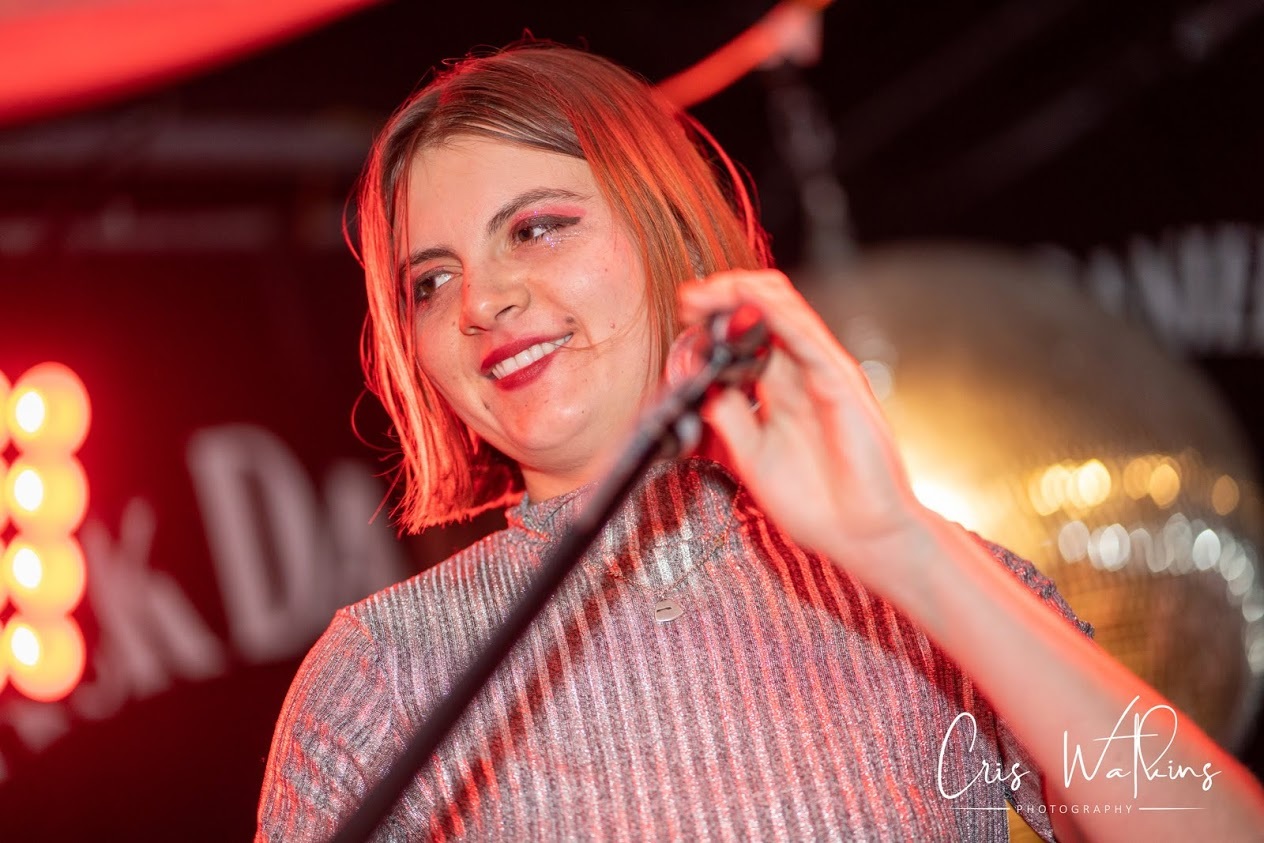 ‘Champagne’ was up next, but clearly not on the ferry boat! The synth intro on this was awesome! It’s more upbeat than the previous numbers and was one of several songs this evening that reminded me of The B52’s, including the following number ‘Damage’.

Track six was ‘Strange Conversations’ and the venue was notably full. The drums were slightly broken, but this was easily rectified. Whilst this was being fixed, we were informed that this was their first ever performance in Brighton and I suspect that they will be back as the crowd were more than welcoming. ‘Humanoid’ was given an airing next. I wonder if it was just me or whether anyone else noticed the similarities between this tune and OMD’s ‘Maid Of Orleans (The Waltz Of Joan Of Arc)’?.

On my word it was time for “cover” now aka ‘Mind Your Own Business’ originally cast into the unsuspecting world by Leeds based Delta 5 back in 1979 on Rough Trade Records. It’s amateurishly brilliant, like a throwaway version of ‘I Heard It Through the Grapevine’ by The Slits. There is a definite correlation between the amateurishness of Delta 5 and Automatic.

Song nine was ‘Signal’ which again sounds like Moon Duo. The following number ‘Calling It’, starts exactly like the Talking Heads ‘Psycho Killer’. The penultimate track ‘Too Much Money’ was another B52’s nod with shared vocals by drummer Lola and main vocalist Izzy. It was time for the final number and Lola ditched her drumset and headed to the front of the stage and gave the Roland drum pads an outing. Sadly there was no encore which fans were hailing for, which put a damper on the night a tad.

Check out their Bandcamp page HERE and find out more on their Facebook page HERE. 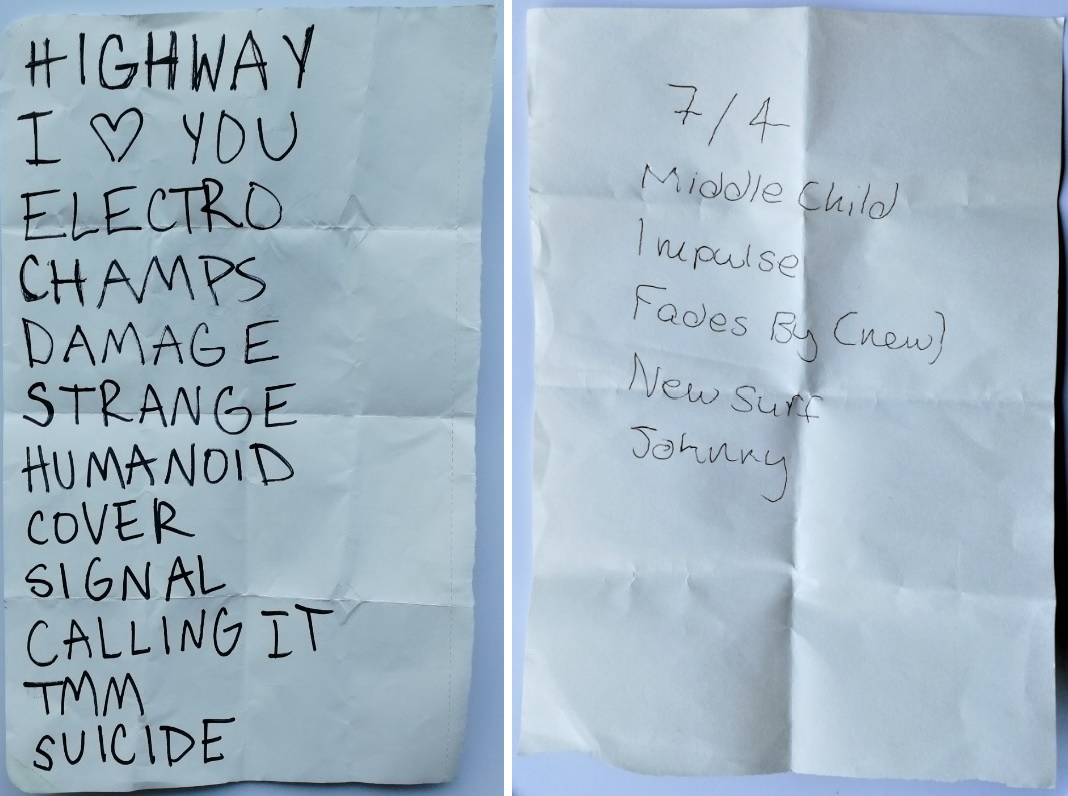 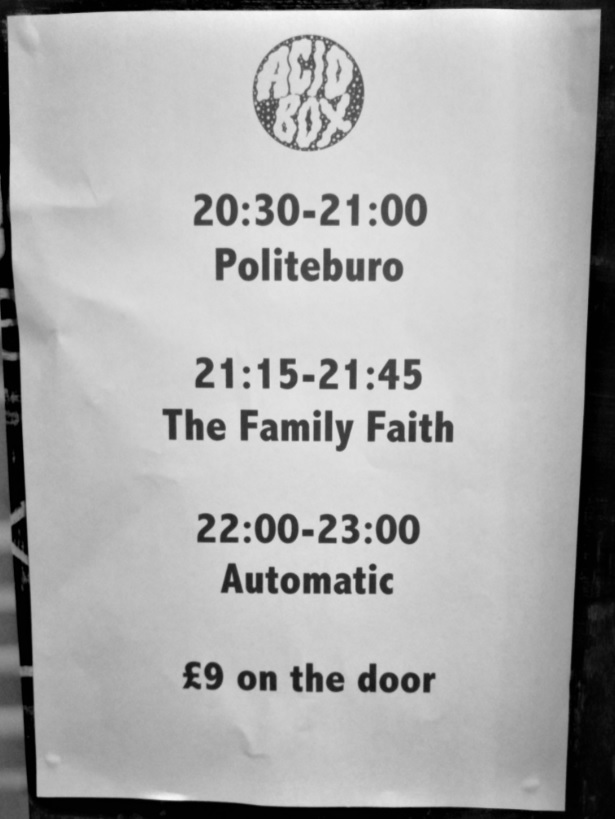