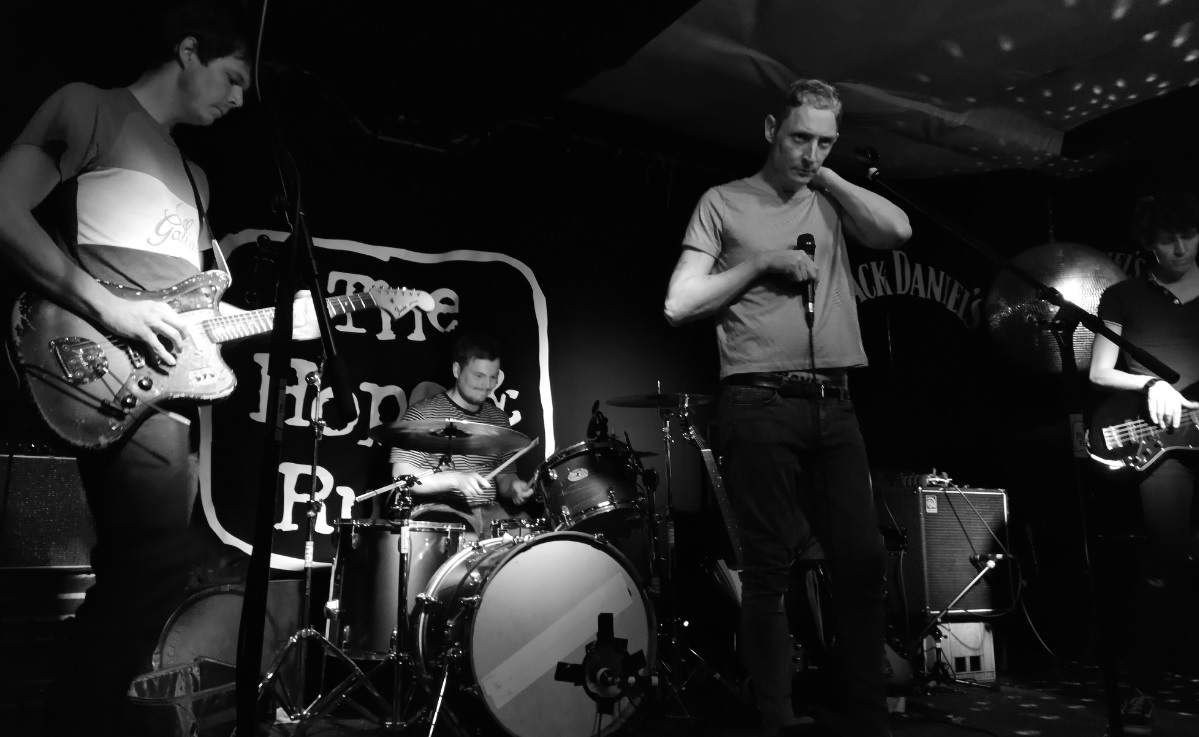 It wasn’t a sad evening that band members Jo, Stuart, Sammy and Martin (aka Red Deer People) had organised in conjunction with those lovely people at Brighton Noise, but a celebration to what they have achieved as well as a showcase for two up-and-coming local acts, Night Vision and Squid. 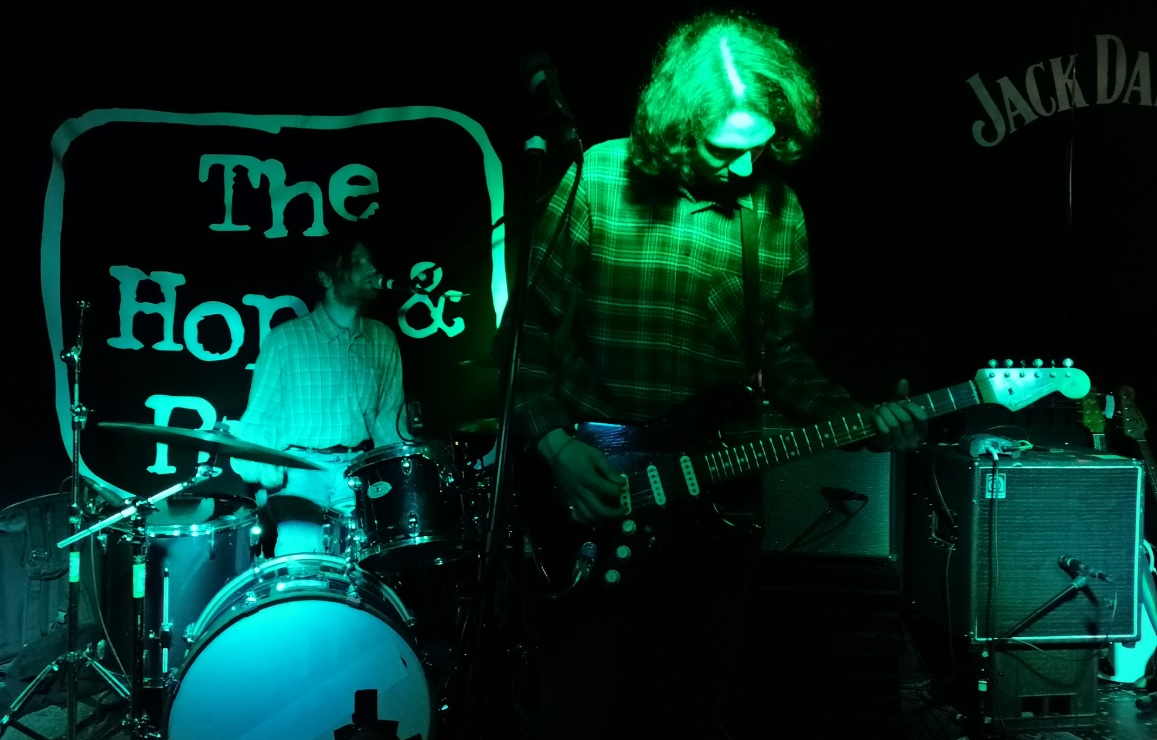 Formed last year, the rad Night Vision were up first and they are a local indie two-piece guitar and drum outfit. Their sound was loud and Dinosaur Jr-esque with elements of The Cure in there too. They were verging on the grunge side of things and it occasionally felt like a jam session with limited vocals and several instrumentals as part of their set. However, I felt that they had moved on up from their April Green Door Store gig that I witnessed. I personally felt that their final track called ‘Steam’ from the guys forthcoming coming EP was the highlight of their set as the vocals were really shouty. They are on Facebook, so you can check them out HERE and if you fancy a listen to their recent debut mini EP then click HERE. 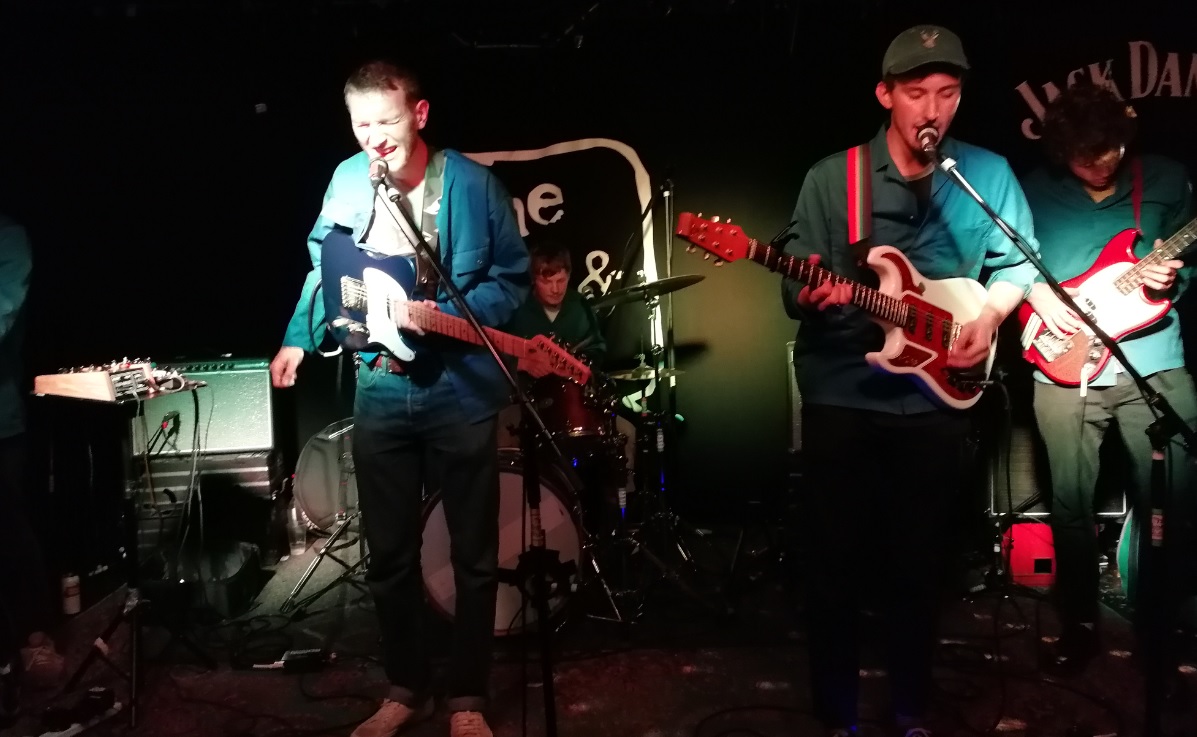 Next up were Squid who are a unique five piece alternative-rock band based in London and Brighton. Their personnel listed on their Bandcamp page is Ollie Judge – vocals and drums, Louise Borlase – guitar, Anton Pearson – guitar and backing vocals, Arthur Leadbetter – keyboards and Laurie Nankivell – bass. However their Hope & Ruin gig lineup was 5 young lads (no girls) clad in trademark blue workman’s overall jackets. 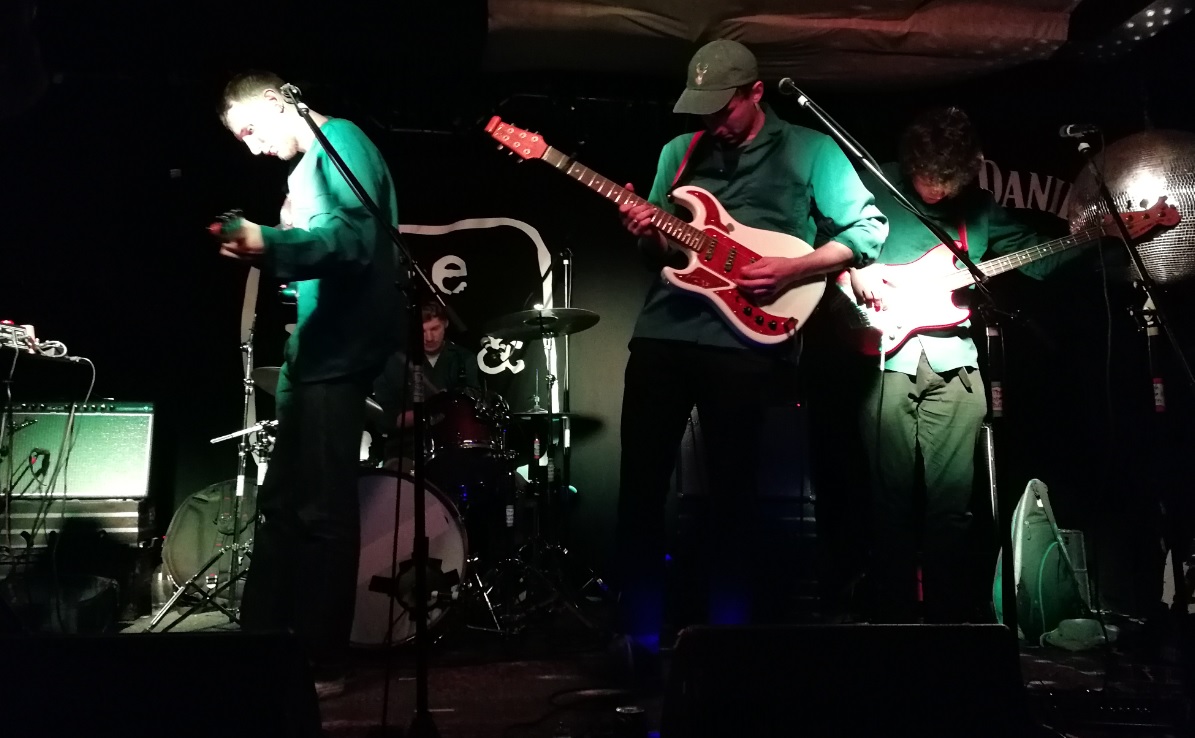 The guys sound is quite difficult to compare with other artists in order to give you an idea of what they sound like. They themselves report that they are “influenced by Motorik rhythms and the more polished corners of late 70’s post-punk”. The notes that I made during their set referred them to the likes of Gang Of Four, Devo, Television and that they were unconventional with often dual vocals with drummer Ollie having the lion’s share. There was a track half way through their set that Arthur’s keyboards appeared to dominate and I liked that best. Squid like their name are quirky. They caught me unaware and so I need to see them live again in order to totally digest what they are up to. Enjoyable set and should go far! Broadcaster Melita Dennett was immediately in front of me and she was bopping around to the sounds of Squid, so no doubt expect hear hear tunes from their ‘LINO’ EP on one of her excellent shows. Listen to/purchase Squid on Bandcamp. 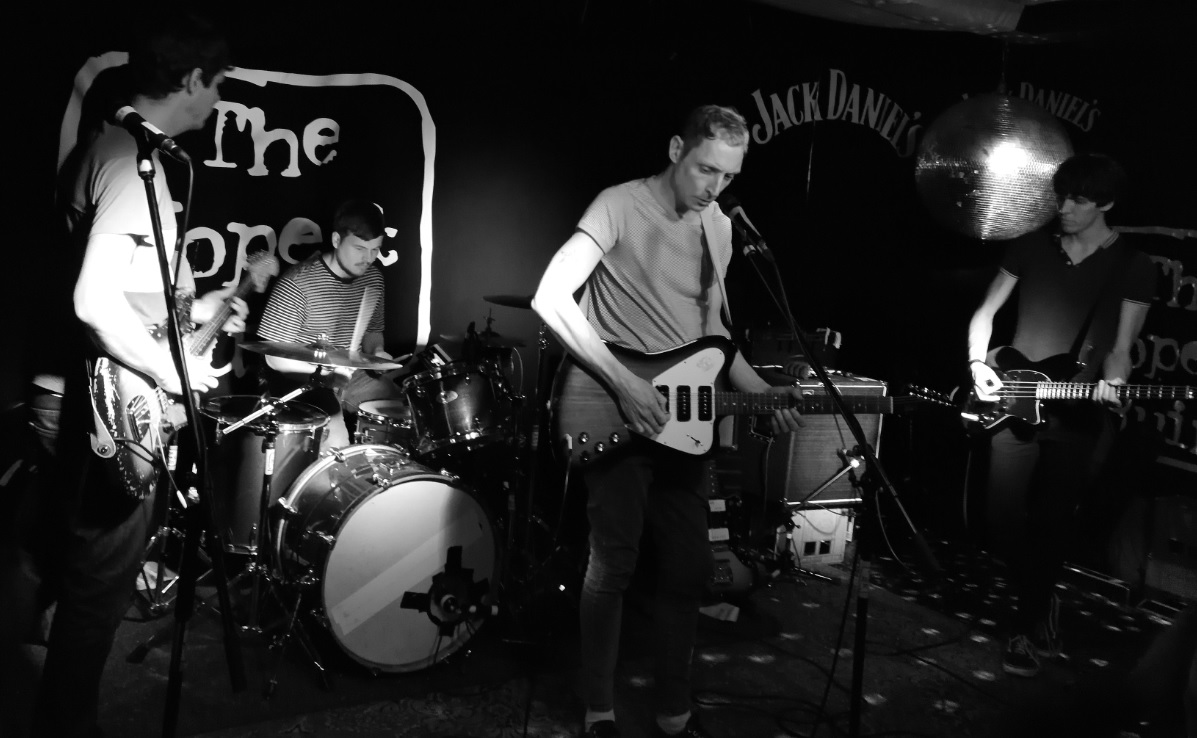 It was now time for Red Deer People to take to the stage for the very last time. The DJ gave one final 7” record a spin, which I noted was the debut Zounds EP from 1980 titled ‘Zounds! You Can’t Cheat Karma’, which came out on Crass Records. 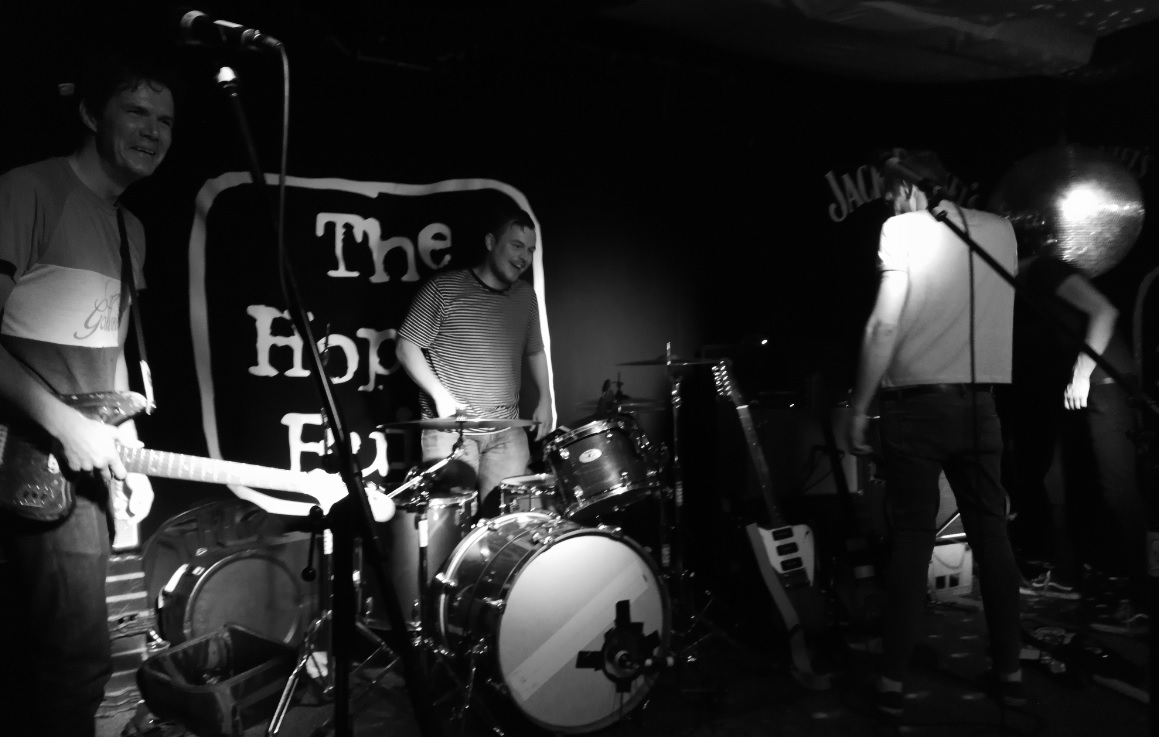 Red Deer People had announced their departure with the following statement “And so it’s with a heavy heart that we announce that Red Deer People are calling it a day. A huge thank you to everyone who has listened to our music, bought our records, and came to see us live over the last few years. We’ve had a blast. We will be playing one final farewell show at The Hope & Ruin on June 14th, we would love it if you could come. Very Much Love.Red Deer People X”. 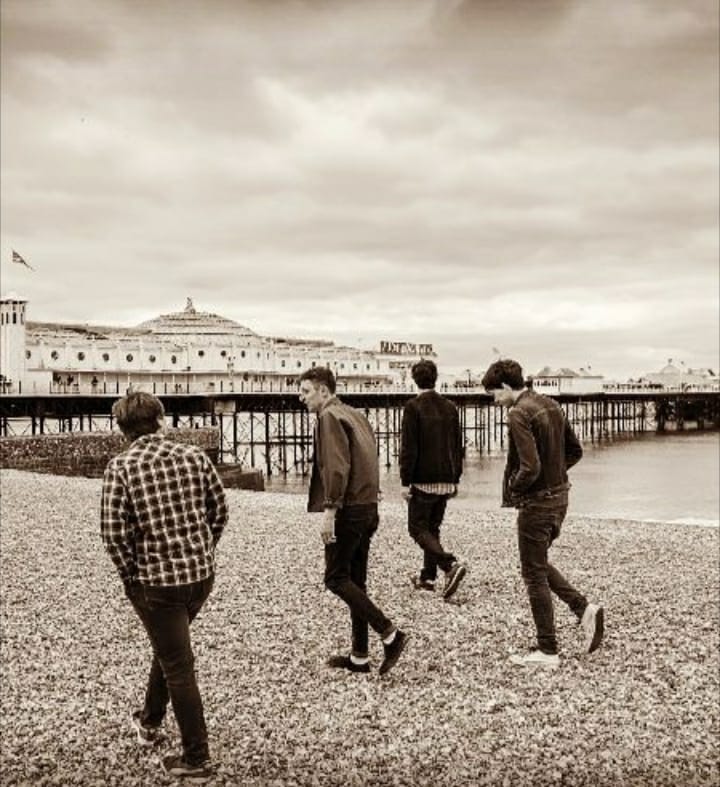 Red Deer People formed in Brighton in 2015 and have spent the last three years writing, recording and playing shows up and down the UK supporting Algiers, Shonen Knife, Traams, Public Access TV and Ulrika Spacek. But I suppose that sometimes you can only take musical acts certain ways for an allotted amount of time before you feel that you need to move onto different areas and I presume that this is what has happened in the case of Red Deer People. There were band hugs at the end of their nine song set, so clearly the lads still get on. 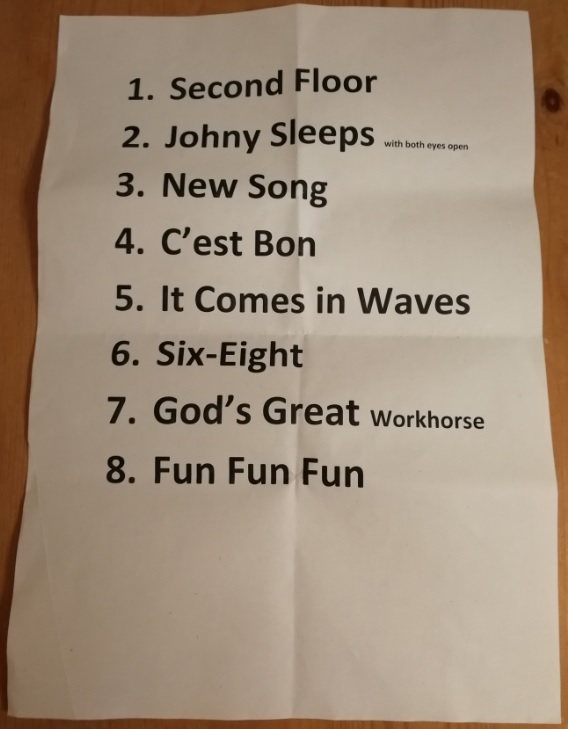 The Hope & Ruin punters (of which there were many) all enjoyed the mix of motoric drum beats and driving krautrock bass-lines and heavy guitar work of the Red Deer People’s post-punk nine song set. My personal faves were ‘Johny Sleeps With Both Eyes Open’, ‘God’s Great Workhorse’, ‘Fun Fun Fun’ and surprise encore track David Bowie’s ‘Rebel Rebel’.

As a memento you are still able to listen to/purchase Red Deer People music on Bandcamp. 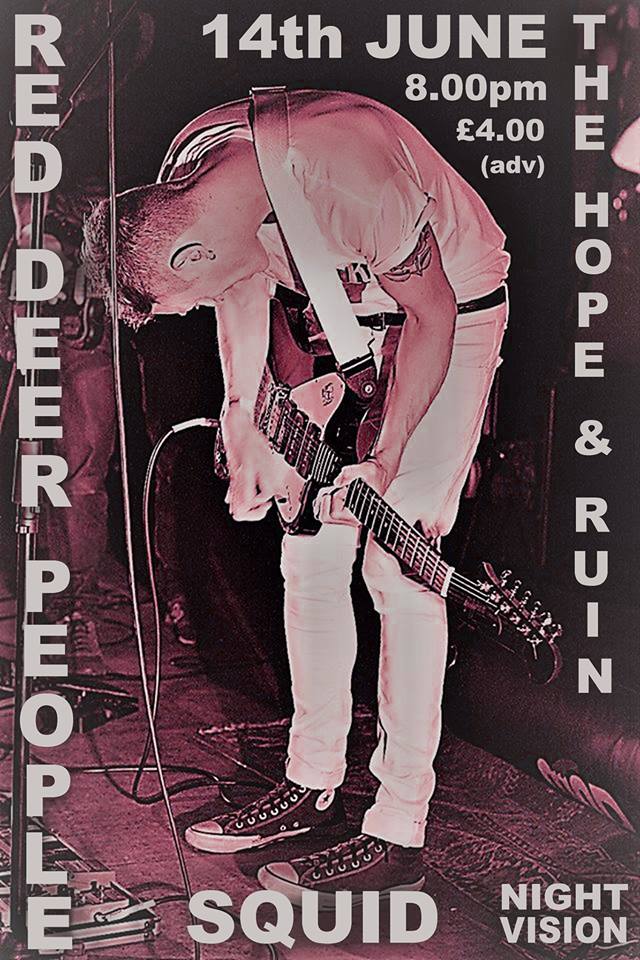 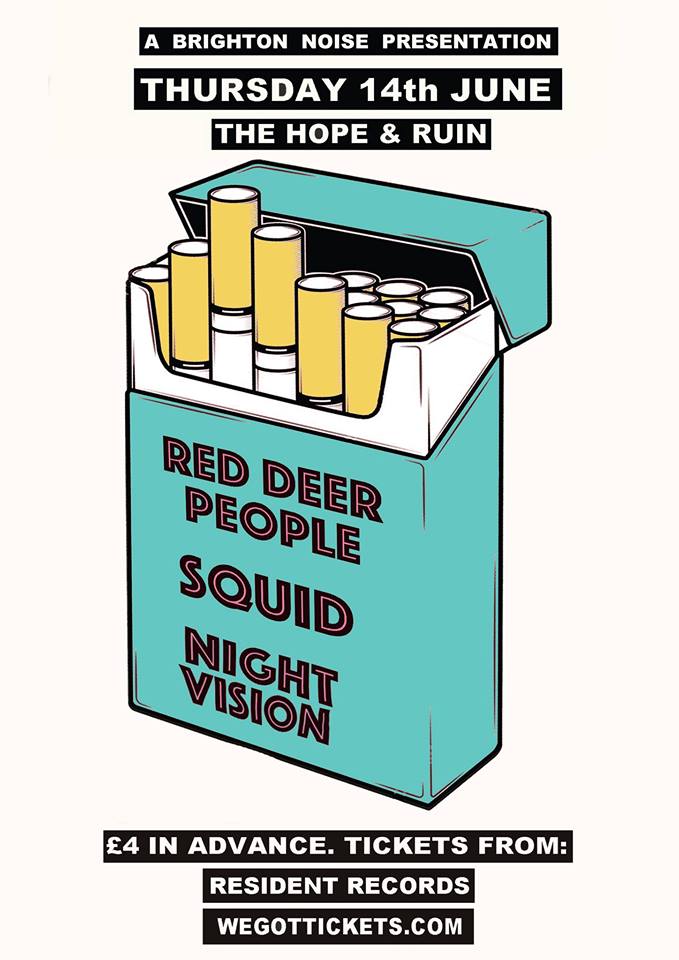