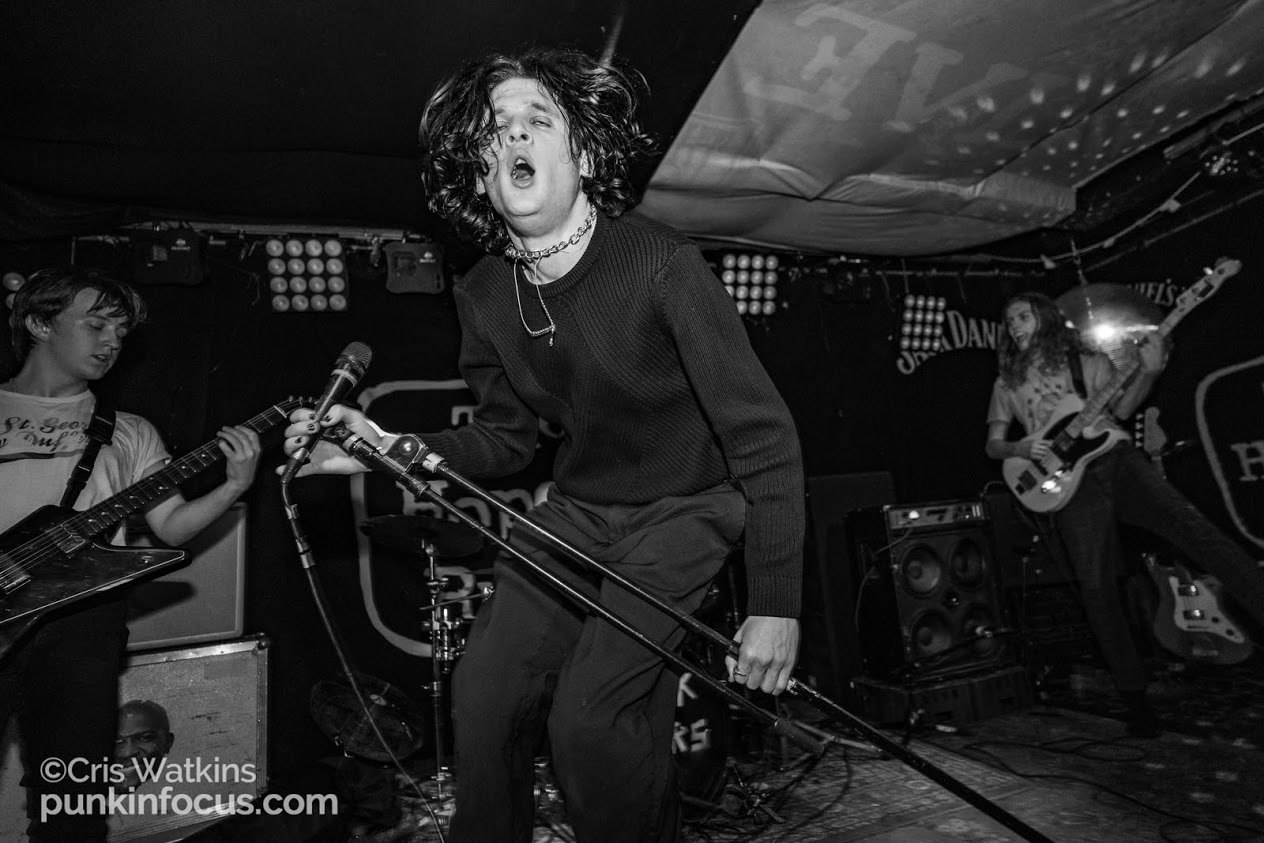 BlackWaters were back in Brighton as part of a 15-date UK headline tour. They last performed at tonight’s venue The Hope & Ruin back on 23rd October 2018 and it was a terrific performance. Of course the Brighton & Hove News Music Team were there – read our review HERE.

Prior to that they performed in Brighton at Patterns on 15th October 2017 – read our review HERE. We initially caught up with them in town as part of The Great Escape, when they performed in the Queens Hotel on 19th May 2017. Back then we reported…. 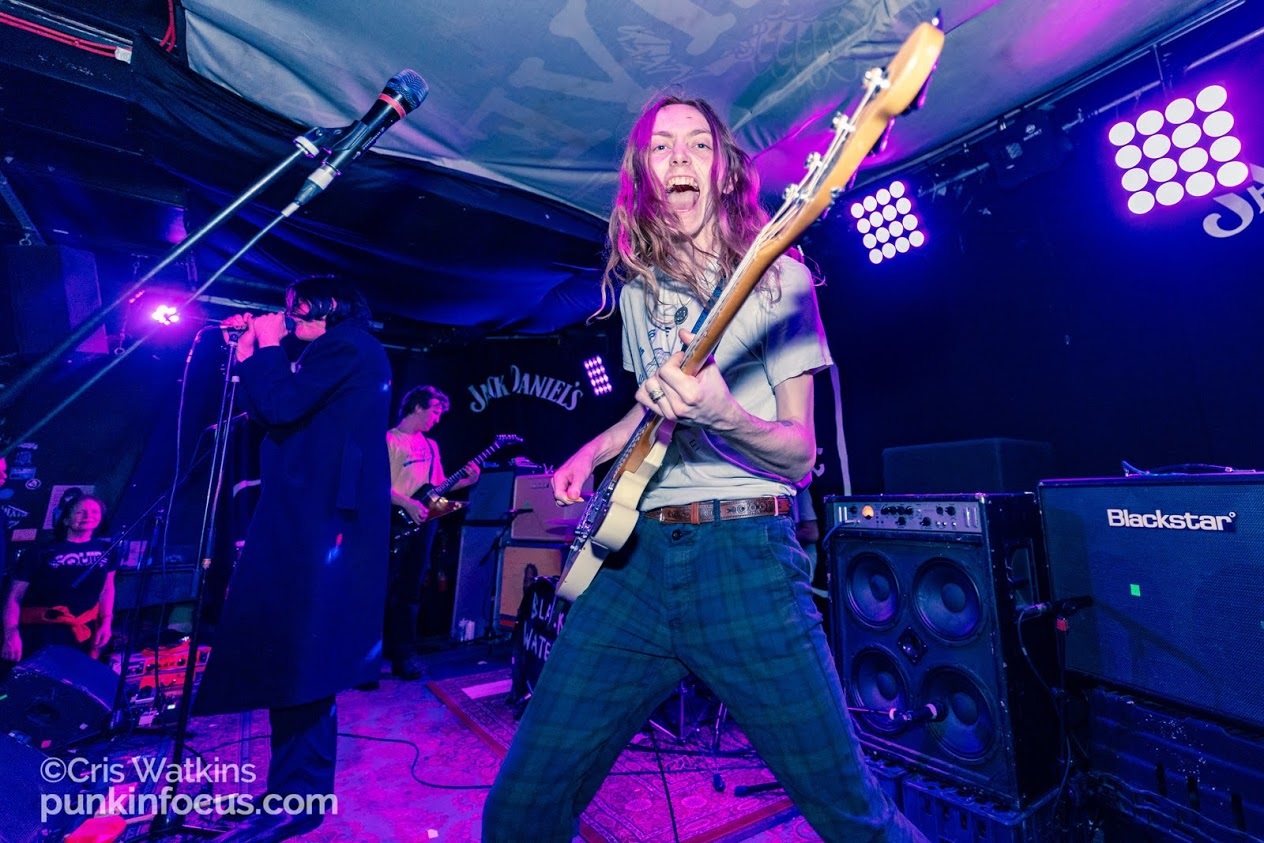 “BLACKWATERS (18:30-19:00 Queens Hotel). Oh my word, Blackwaters are awesome and should go really far! They hail from Guildford and are apparently only 18 years old. They have a stage manner of a band of more mature years, especially their captivating front man, who has an element of Lydon about him. They are best described as being just like up-and-coming Bristol band Idles meets sub three minute 1976 punk rock. So any self respecting punk needs some Blackwaters in their life. They are next in Brighton at the Concorde 2 on 15th October. Their best tracks are Down and the anthemic Oi Oi style F*** Yeah. I must see these boys play live again”.

Each of these previous performances were filled with so much energy that here was a band that should seriously not be missed. Would this evening’s performance continue or buck the trend? We shall shortly see….. 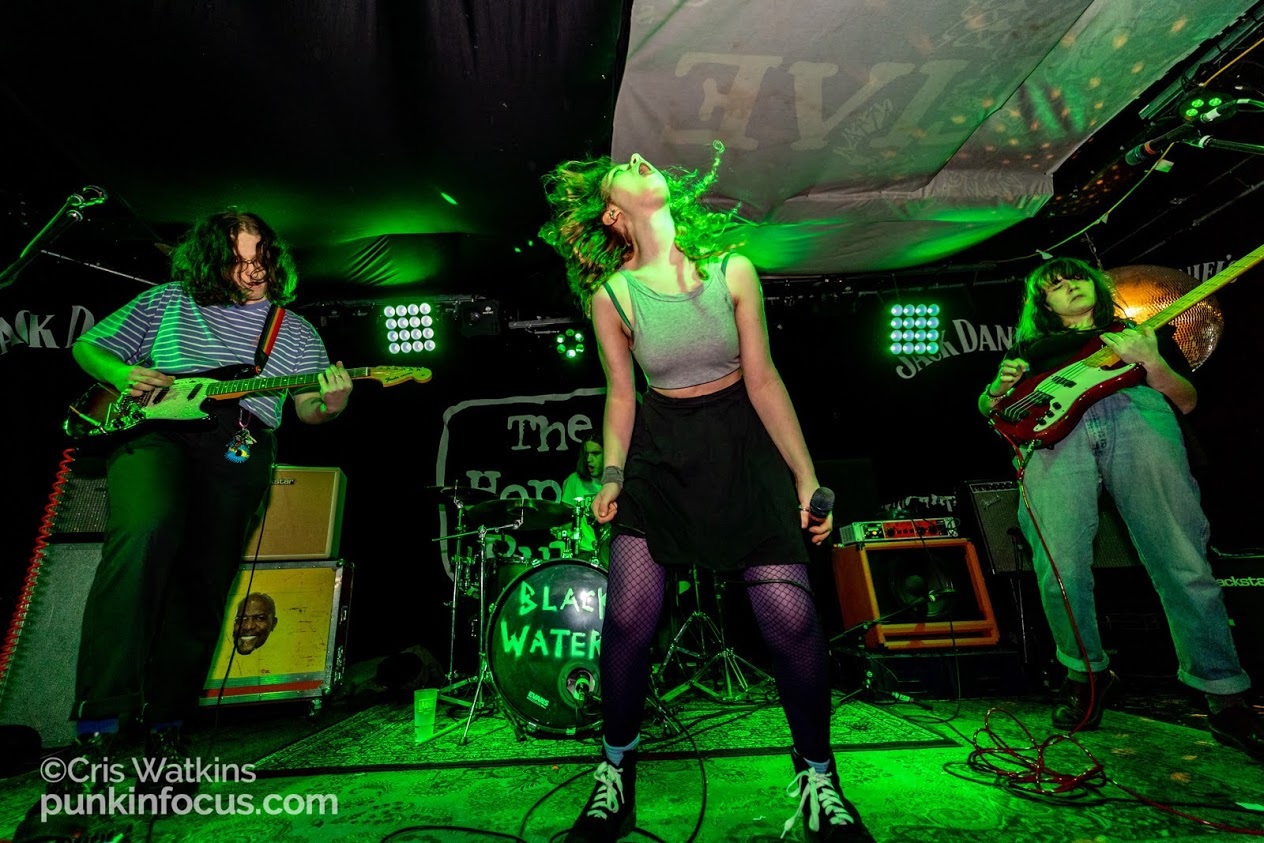 Up first tonight were a young local outfit called Swanmeat which consists of Pippa Jay Rainbird (vocals), Annabel Whittle (bass), Dan Cox (guitar) and Owen Bullock (drums). Funnily enough, I had actually encountered bassist Annabel only two nights ago in The Rossi Bar a few doors down from tonight’s venue, as she is also the drummer for another exciting new Brighton outfit called Wife Swap USA. And get this, I will be witnessing Swanmeat’s 20 year old vocalist Pippa in action tomorrow, when she will be positioning herself behind a drum kit as she is also a member of new act PoliteBuro. Talk about talented young people or what!

Swanmeat have already unleashed their first self-titled 4 tune EP back in October last year, which has most certainly been turning a number of influential heads. Those include none other Mr “2-4-6-8 Motorway” himself, Tom Robinson of BBC Radio 6 who observed “Strawman’, 135 seconds of driving defiant joy from Swanmeat.” Whereas local finger on the pulse radio DJ Melita Dennett observed on her ‘BBC Introducing in the South’ show that the Swanmeat release consists of “Dirty bass, check. Pounding drums, check. Buzzsaw guitar, check. Shouty vocals, they’ve got it all.”

Find their EP on Spotify.

This evening we were gifted the first two tracks from their EP, namely ‘Gluten’ (with its superb drumming and UK Decay style guitar sound) and ‘Strawman’, (which most certainly sounds just like IDLES, especially the drums and style of vocal delivery).

There were also a handful of as unreleased heavy post punk goodies. Pippa’s vocal delivery is deliberately deadpan and the group’s delivery is raw and untarnished, which is most refreshing. Track four on the night was ‘Sickboy’ which is a fast punk number, and track six, called ‘Skin Disco’ was a boy/girl duet number that halfway through went into a disco beat, which reminded me of the old Peter And The Test Tube Babies classic ‘Disco’.

For their final number ‘Trains’ Owen relinquished his position behind his kit to stroll into the limelight and take over vocal duties and Pippa went in the reverse direction. I must however seriously flag up their second song of the night ‘Teenage Idol’ as this needs to see the light of day with some urgency. If you are a Siouxsie & The Banshees fan and crave more of the same, then you need not look any further! Thoroughly enjoyed their set and I need to see them live again. They are next off to conquer Bristol and London, so you have been warned! 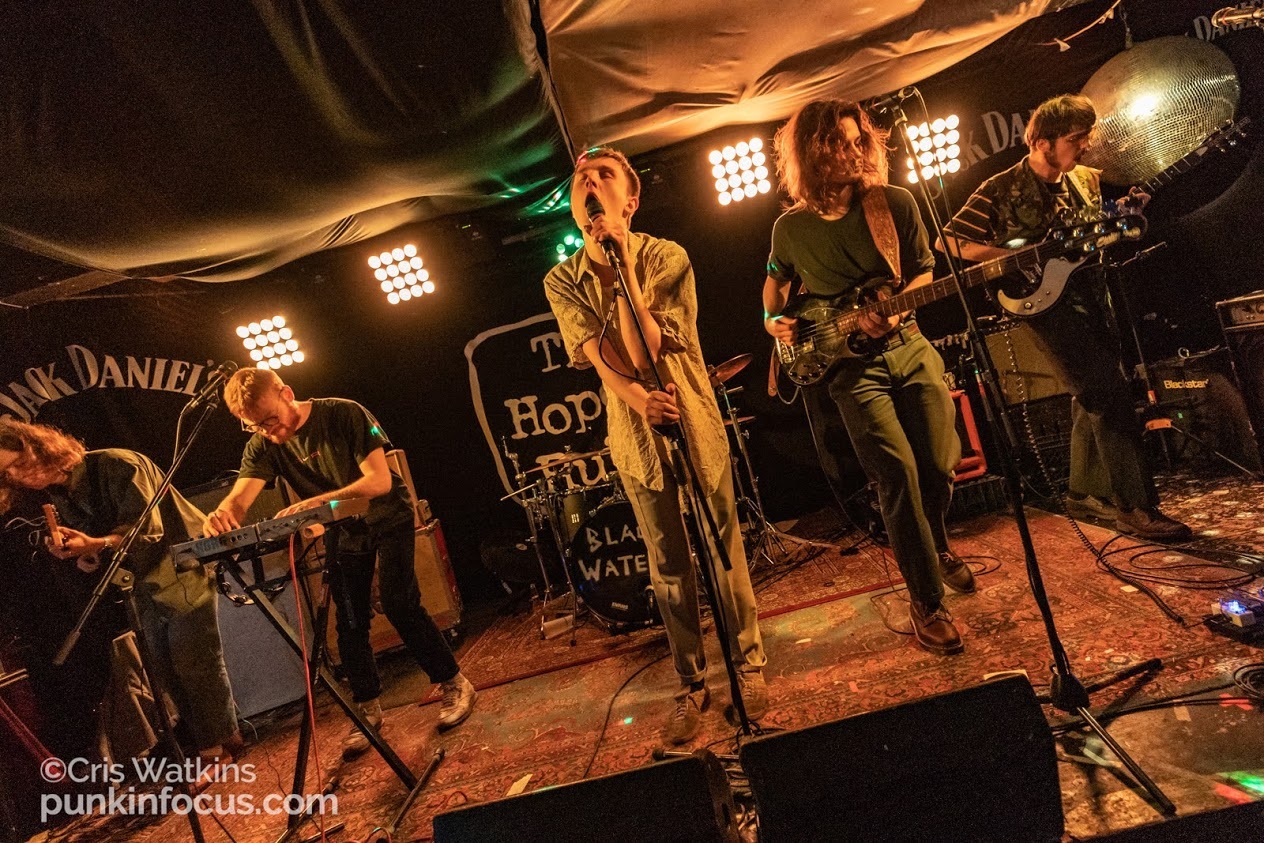 Locally, there has recently been quite a buzz regarding this sextet, so tonight I wanted to see what all the fuss was about. They began their 11 track set with ‘Animals’ which oozes a marching band style drums. One then can’t fail to notice that vocalist Billy has seriously been studying the Ian Curtis (Joy Division) and Andy McCluskey (OMD) dancing on stage manuals – His style is uncanny!

A few songs in and it appeared that Jake’s cool looking glam rock shaped guitar had given up the ghost. It was immediately replaced with a dash across the stage to a backup. It was beginning to appear that these lads are masters of the quirky beat and were performing a tight in unison set. They even have a song and I quote “About naughty people at the BBC”, that uses the lyrics “Tie me kangaroo down”. “Can you guess what it is yet?” (says I sarcastically).

The venue was filling up rather nicely to witness the veritable soundclash of sounds being unleashed by Our Family Dog. To me it felt as though they went up a notch mid set with the arrival of Billy uttering the lyrics “What a day”, from their ‘Layer Cake’ song. This was followed by the Pigbag-esque track ‘Average Joe’ but with vocals atop. The melodic harmonies are good and you can really sense that here is a band that are destined for greater things. Our photographer Cris, reviewer Martin and our VIP guest Jordan Mooney all really rated this band, whereas for myself personally the verdict was still out. Maybe I require another viewing? Talking of which, they will be playing a headline show in tonight’s venue (The Hope & Ruin) on Thursday 19th March – Purchase your tickets HERE. 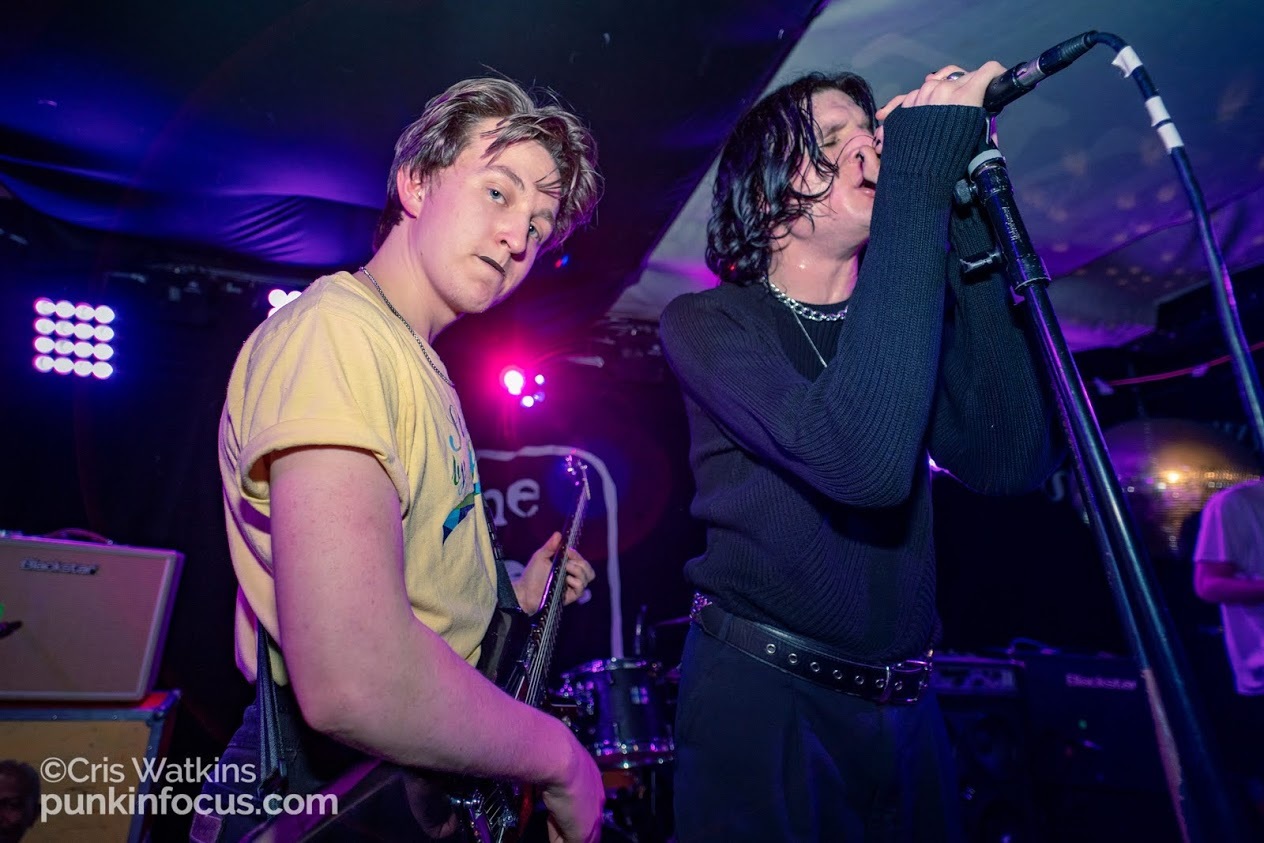 It was time for local promoters Ban The Disco’s headline act BlackWaters to grace the stage to perform a dozen numbers for the busy crowd. This evening was date number 12 of a 15 city tour for Max, Oliver, David and James. They have so far put in port at Glasgow, Newcastle, York, Liverpool and Southampton to name just a few.

The quartet apparently got it together at The Academy of Contemporary music University in Guildford in 2014 and are still on the case today. You can hear the band’s influences in their material, which includes many famous names including Dead Kennedys, The Clash, Jonathan Richman and The Modern Lovers, The Ramones, The Velvet Underground and Palma Violets.

One thing I immediately noticed tonight is that frontman Max has morphed into a taller version of Jaz Coleman from Killing Joke. I suspect that he is consciously (or even unconsciously) doing this having previously encountered fellow Killing Joker, Youth, who produced BlackWaters debut EP ‘People Street’ at his Space Mountain Studios in Spain. Youth being the famed bassman for the band and producer of The Verve’s ‘Urban Hymns’, The Charlatans ‘Who We Touch’ and The Cult’s hit single ‘She Sells Sanctuary’.

I also note that since our previous live encounters that they are more polished and ‘grown up’ in their musicianship, including latest single ‘Two Time Lover’. They simply let their music do all the talking as Max doesn’t introduce hardly any of their accomplished compositions and lays off interacting with the crowd. I think this is a shame, but certainly wouldn’t want to listen to idle banter about their journey here and what they ate for tea.

The punters were bopping along and the further into the set we got, the better they got. They have many tunes that you can jig along to, but the ‘hits’ were reserved for the backend of the set and they were coming fast and furious. So by the time we arrived at ‘F*ck Yeah’, ‘Good Times’, and ‘Down’, there was a certain amount of moshing to be had. I’d say ‘Good Times’ was the highlight of the set this time around. They were due for an encore and had time for one, which should have been ‘Suzie Q’, but sadly they were content to leave it at that. I suspect that they were off somewhere after the gig to celebrate drummer James’ birthday.

So in conclusion, BlackWaters are always a great band to see live, but this time around I didn’t feel that they had quite attained the lofty heights gained from previous encounters. Maybe because it was a Monday night? Could it possibly be that I was still ensconced in the quality of Swanmeat’s set? But I sure would see BlackWaters live again! 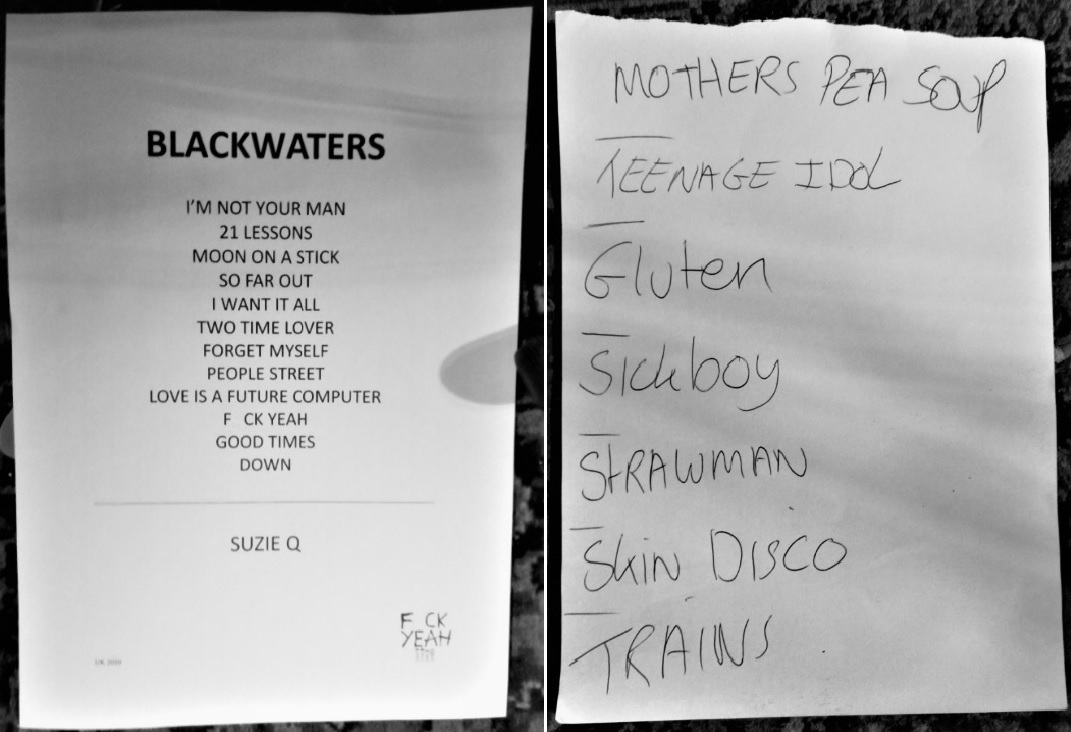 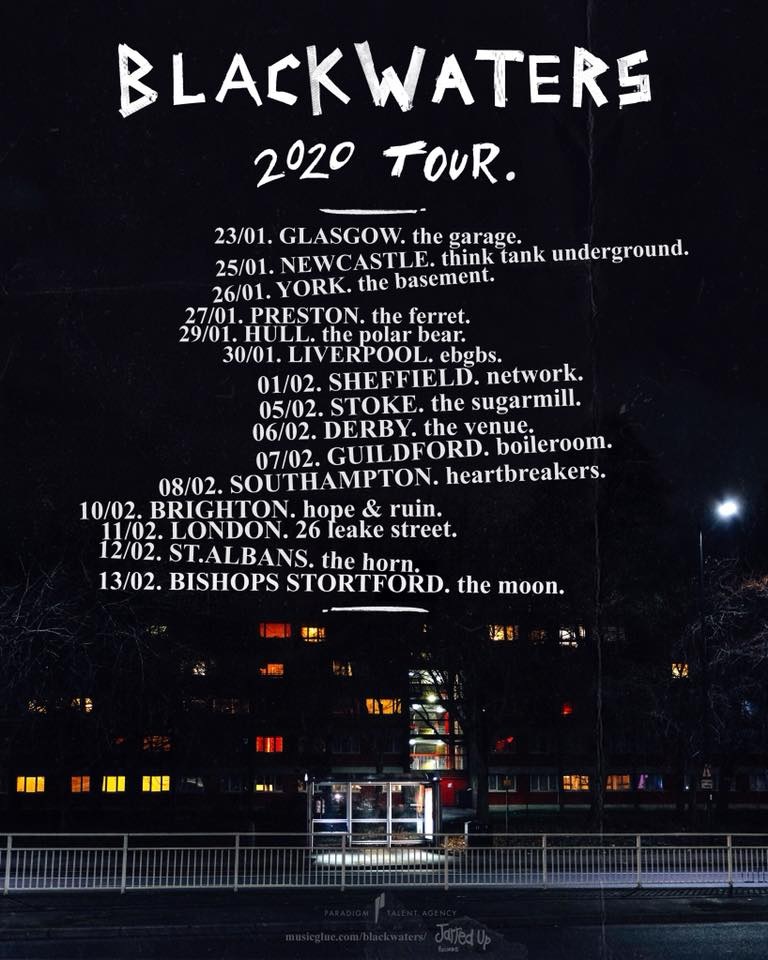