A multimillion-pound revamp of the County Ground in Hove has been approved by councillors this afternoon (Wednesday 4 March).

The plans include demolishing the now-closed Sussex Cricketer pub, in Eaton Road, and building a nine-storey block of flats with a “pub restaurant” on the ground floor.

Councillors were concerned that the planning application by Sussex Cricket did not include affordable housing.

Instead the cricket club has offered to put almost £900,000 towards affordable housing elsewhere in Brighton and Hove.

The 37 flats – along with commercial premises and parking – form the first phase of four in a project that Sussex Cricket said would secure the future of the game in Hove.

Brighton and Hove City Council’s Planning Committee granted permission for detailed plans for the first and second phases of the project.

The committee also gave outline permission for the third and fourth phase of the plans.

Once the flats and pub restaurant have been built, the cricket club intends to demolish offices and part of the south west stand for the second phase of the scheme.

In their place the club plans to create a new hospitality area, with a reception and corporate space.

Among those with concerns about the lack of affordable housing were Labour councillors Daniel Yates and Nick Childs.

Councillor Yates said that he was not aware that the council was “investing in cricket clubs” rather than homes.

And Councillor Childs said: “It is a political decision by the council to ‘subsidise’ the cricket club.”

He said that a compromise between the club and officials looked like costing six homes which could have housed more than a dozen people.

Conservative councillor Joe Miller said: “I appreciate the concerns of other councillors about the affordable housing but there is a huge public benefit with the sporting provision.

“I would like a strong commitment from the applicant to apply for external funding.”

Planning consultant Chris Barker, from ECE Planning, said that the club would seek as much funding as possible from the English Cricket Board as it currently faced a £4 million funding shortfall.

But the English Cricket Board expected bids totalling about £200 million for a £50 million pot.

Mr Barker told the Planning Committee at Hove Town Hall: “The club will apply for as much funding as possible.

“However, this funding is shared across 18 first class cricket clubs.”

The committee also required Sussex Cricket to pay almost £300,000 in “developer contributions”. These would fund, among other things, improvements to local bus stops, pavements and a bike hub. 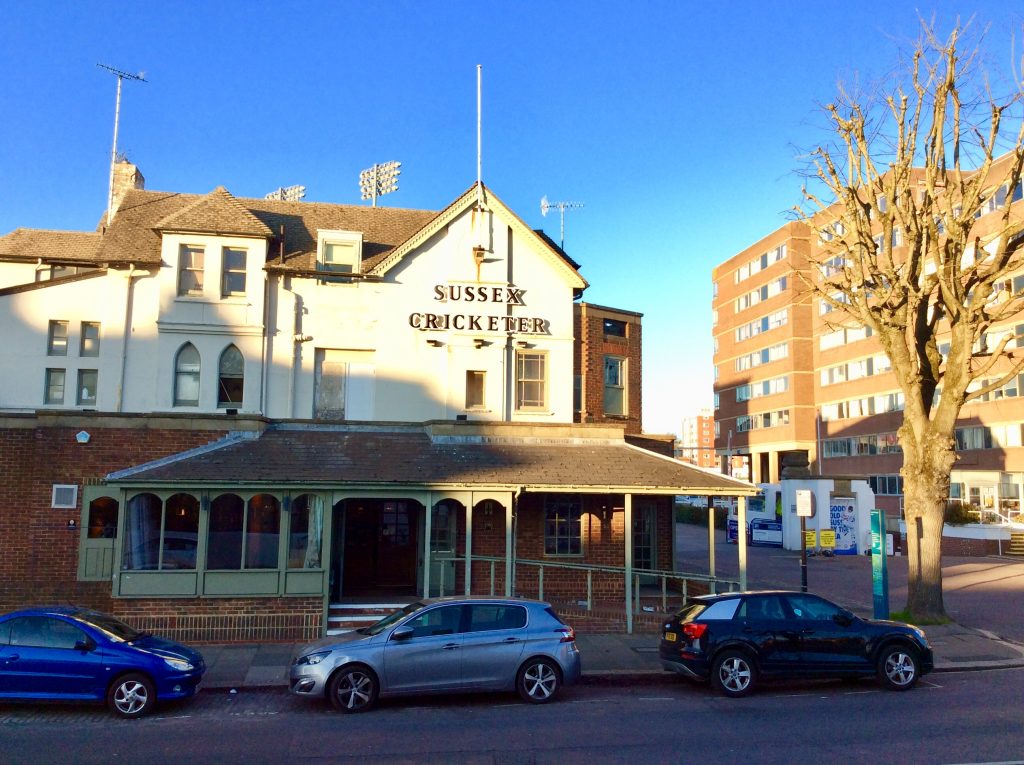 The Sussex Cricketer before it was boarded up

Green councillor Leo Littman said that he had concerns about the scheme but voted in favour.

He said: “I know the pub very well and I would rather there was a definite provision for a pub rather than a pub restaurant.

“I support the need for community sport and on balance this is a very good application.”

The Planning Committee voted seven to three in favour of granting planning permission for the scheme.

Sussex Cricket chief executive Rob Andrew said: “The County Ground has been based in Hove for nearly 150 years and we are thrilled that this allows us to secure our future here and to continue to deliver our wide-reaching community programmes across Sussex.

“We want to thank our club members, neighbours, local businesses, amenity and conservation groups as well as the South East Design Panel and council officers for their important input on our plans.”

Sussex Cricket said that it had “commissioned award-winning local firm ECE Architecture to create the plans, which are estimated to attract £20 million capital investment and create 153 jobs”.