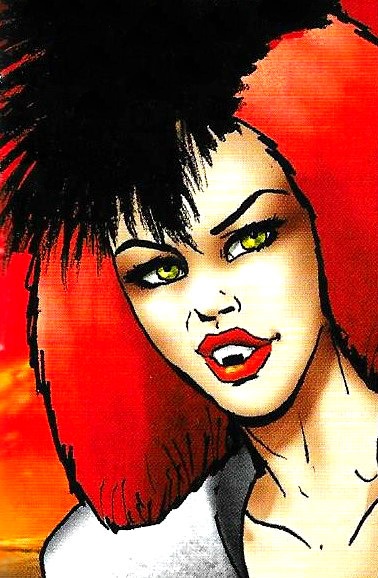 The mural featured the 2000 AD character Durham Red. This picture by Lucy Ingram from fandom.com

A stalker who tried to woo back his ex girlfriend with a huge mural of her favourite cartoon character has been spared jail.

James Long, 45, subjected his ex-partner Emily Neal to months of obsessive and bizarre behaviour, including placing a banana on the balcony where she worked, creepy bank transfers with messages as references and contacting her friends and neighbours.

Eventually, he commissioned a 25sqm mural of 2000 AD character Durham Red, complete with a 300-word essay pleading with her to take him back, which was displayed by Portslade train station in Boundary Road – where they first went on a date – last July.

But instead of picking up the phone to him, Ms Neal called the police and he ended up in court.

Long, of Broadwater, Worthing, denied the charges but was convicted after a trial at Brighton Magistrates Court on January 29.

Today, he was given an 18 month community order and told to carry out 200 hours of unpaid work.

In a victim impact statement read out in court, Miss Neal said: “I won’t leave the house any more. I can’t trust people.

“It’s appalling how he treated me. It’s affected my self confidence.

“I take each day as it comes.”

Defending, James Yates said: “Everything he did came from a good place and h’es come to terms with the fact that he went too far and that his actions were wrong and he’s remorseful for it.”

District Judge Tessa Szagun said: “The offence that I dealt with quite a high degree of planning and some sophistication in that you were aiming at actions that would be highly emotional to play on the emotions of this woman, you tell me to win her back.

“You were leaving symbolic items at her place of work which she told me made her feel vulnerable, that you were targeting and watching her.

“Ultimately in the end you commissioned a piece of artwork which was put on display for all to see which she found shocking and humiliating.”

However, she took into account that he had not contacted her since his arrest and his lack of any previous convictions, and passed a high degree community order rather than a prison sentence.

During the trial, the court heard Miss Neal was alerted to the mural when a well-meaning resident posted it on the local Facebook group, captioned “Desperately seeking Emily”. The post was later deleted.

Long said he was simply seeking a reconcilation, which he thought would happen as they had previously split up and got back together again, even after she blocked him on social media.

But district judge Tessa Szagun found him guilty, saying Miss Neal had made it clear she wanted no contact with him after their final break following a disastrous holiday in Cuba.

In the seven months that followed, he turned up to deliver presents on Christmas Eve, then continued to send emails, flowers and gifts to both her home and her work.

In January, on the anniversary of their first date, he left a banana with the words “two years today” written on it and a can of Red Bull on the first floor balcony of her office.

In March, he sent two £1 bank transfers to her account, using the reference to message her “Miss you sexy face x” and “Please talk to me”.

He sent her friend a message asking her to pass on a request to meet up for coffee, adding: “She will hate it but nothing else has got her to talk to me.”

He also contacted one of her neighbours in a bid to get a message through to her.

As well as the unpaid work, Long was also told to attend ten rehab days and pay £965 in costs and an £85 victim surcharge.