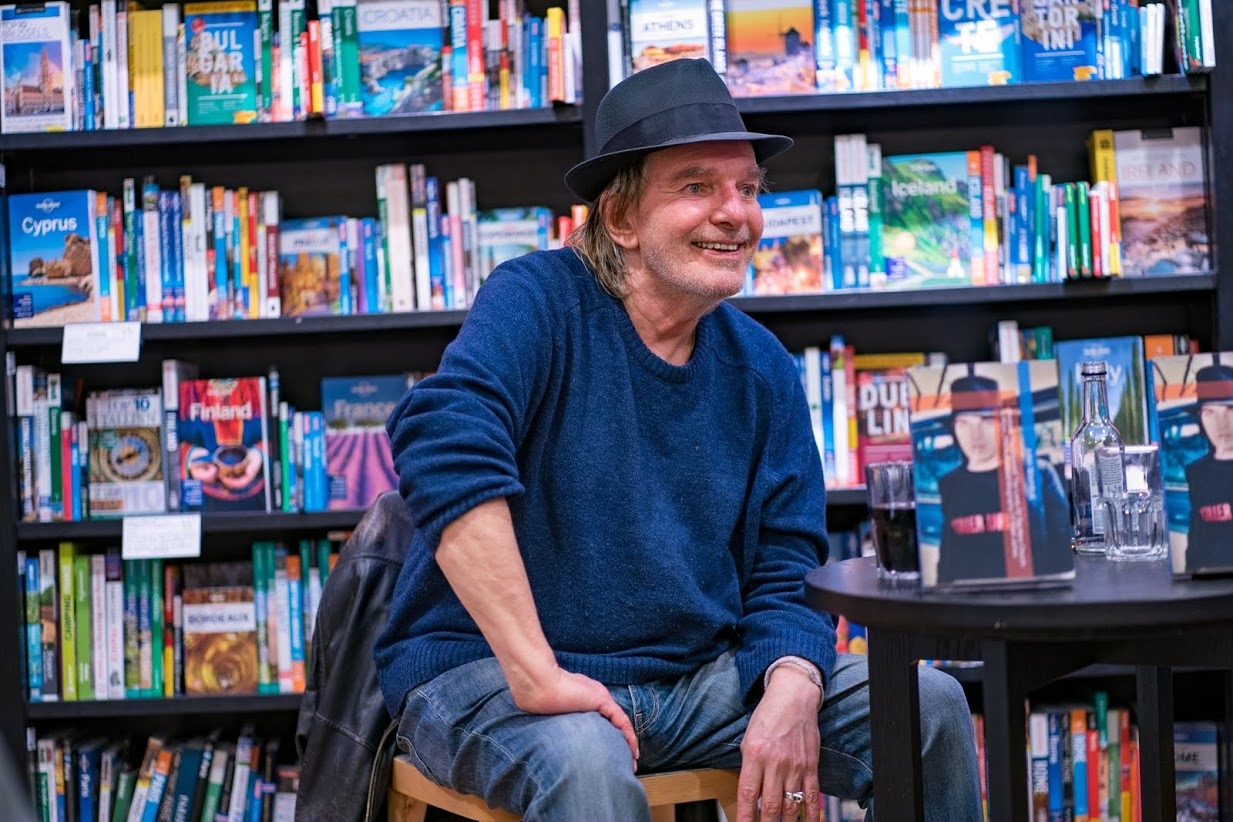 The Brighton & Hove News Music Team were on a tight schedule this evening as we were endeavouring to cover two ‘happenings’ in the City, one immediately after the other, with the second one being a hardcore punk gig in Hove – see the review HERE.

But first up was something a tad different for us, a book launch in Waterstones Brighton (71-74 North Street opposite The Clock Tower). The title in question being ‘Bastard, The Damned, The Lords Of The New Church and More: The Authorised Biography Of Brian James’. 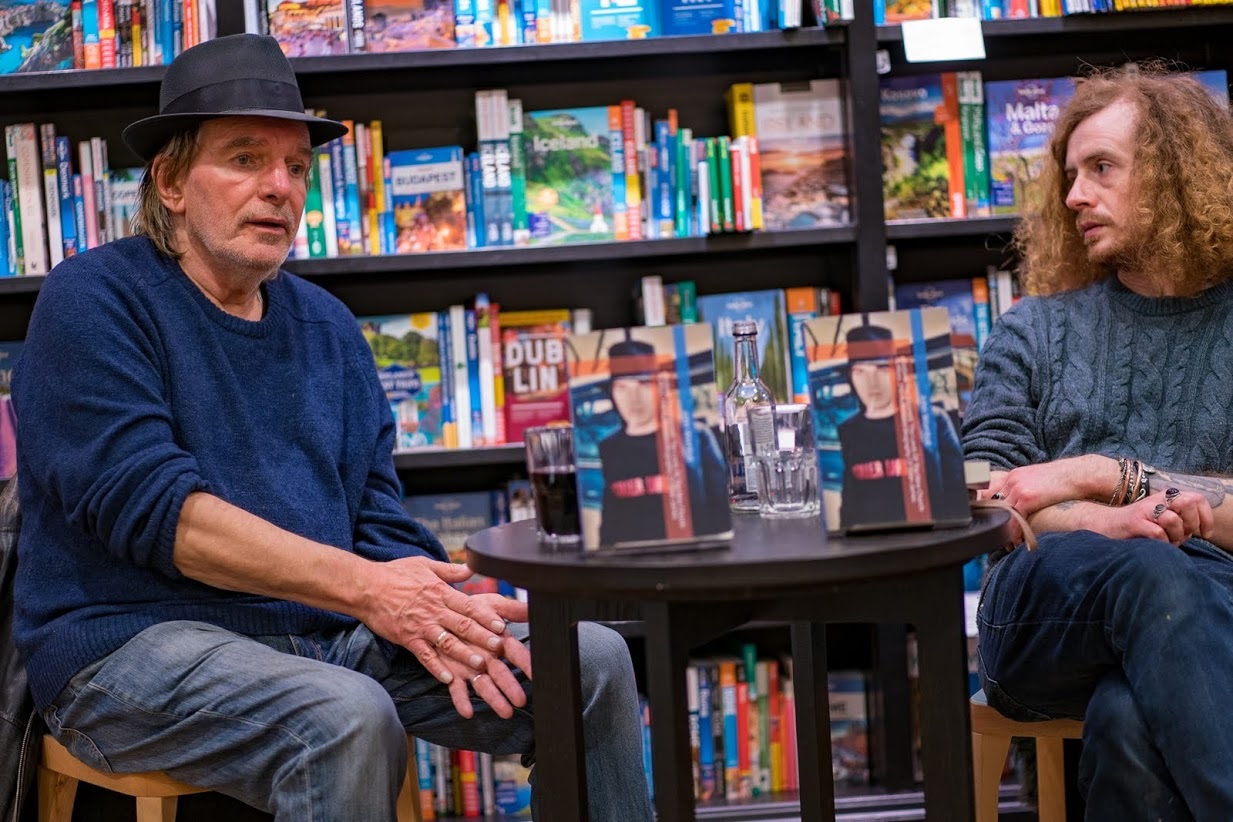 Present this evening was not only the author, John Wombat, but the great man himself Brian Robertson aka Brian James. This was an intimate affair being held on the third floor adjacent to their in-store coffeehouse. The format was a question and answer session, initially from just John Wombat and then the questions were thrown open to the floor and there were some decent ones in there too.

Tonight would certainly be memorable for me in more ways that I had ever anticipated. Not only had I never been up close and personal with Brian James before in order to hold a conversation and throw some questions in of my own, but the chap I ended sitting next to was a very dear old school friend that I had lost touch with, more than 35 years ago!

As I arrived at the allotted area, this chap sitting down in front of me turned around and immediately said my name. I did not recognise who this person was and thus I was rather bemused. It thankfully turns out that in the 35 plus years since I last saw my old school mate, I haven’t changed that much! That’s a result.

The friend in question is called David Ferrier and we used to be in the same classes at Westdene School on the outskirts of Brighton. We both went on to separate secondary schools and I had lost touch with him for a short while, but we ended up meeting at a few Brighton concerts, such as Altered Images at Sussex University in the early 1980’s, but by around 1985 or before we lost touch, until tonight! 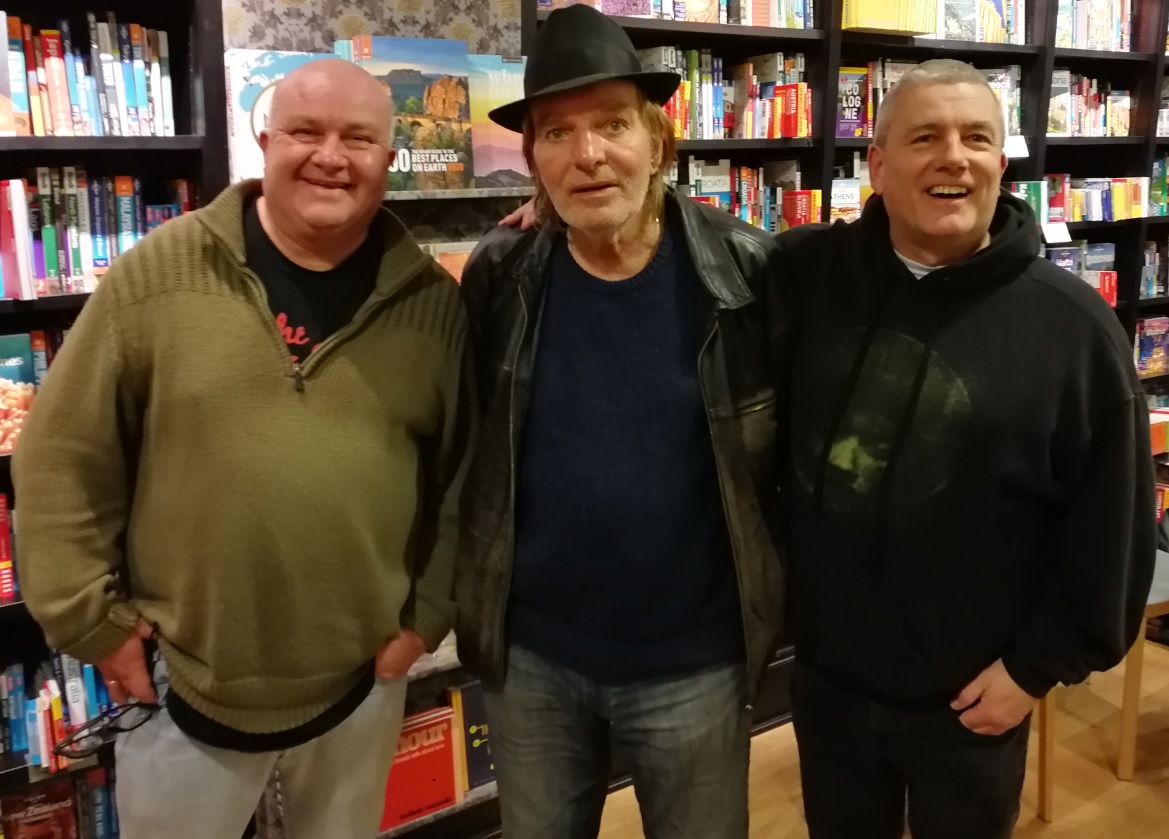 ‘Bastard, The Damned, The Lords Of The New Church and More: The Authorised Biography Of Brian James’ presents the life and career of one of music’s most pioneering, and far too often under-appreciated, guitarists and songwriters in the UK. The book covers from his days as a youngster, cutting his teeth in blues and rock ‘n’ roll cover bands, Brian created the uncompromising Bastard all the way right through to his latter projects including details his other bands, the Hellions, Brian James Brains and the Brian James Gang, in addition to a slew of solo projects.

We sat in the second row of chairs this evening and everyone listened intently to every word that Brian uttered. Immediately behind us was sat Brian’s son Charlie, who was a jolly nice fellow and at the back was his glamorous mother (and Brian’s wife), who hails from Finland but sounds Swedish.

Brian came across as a really nice bloke and we learnt a potted history of his life, with a few nuggets thrown in. Such as prior to the ‘rock thing’, Brian was very much into the music of Chester Arthur Burnett, who was known as Howlin’ Wolf. He was a Chicago blues singer, guitarist, and harmonica player, who was originally from Mississippi and became as successful as fellow bluesman Muddy Waters, who Brian also liked. 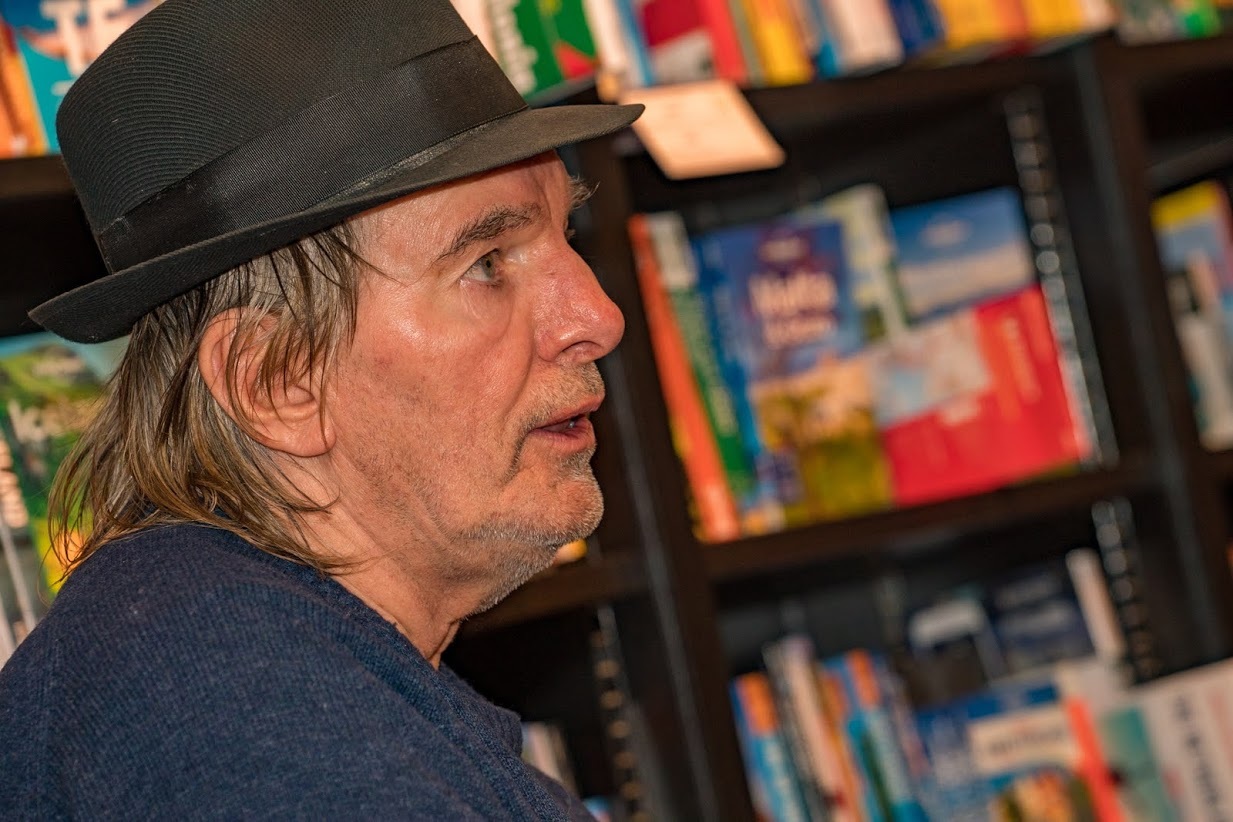 Brian really enjoyed ‘You Really Got Me’ by The Kinks, but told us that he really got off on the whole live music thing, which is something I totally get, especially as we are off to a gig shortly.

Brian told us that the whole ball game changed for him when he went to a party and the host stuck this record on and on hearing it Brian made a beeline to the host to find out exactly what it was. He said that it was the second album by The Stooges. So I assume that to be the 1970 ‘Fun House’ album. This was the spark to leave the blues behind and follow this new proto-punk sound.

Brian said that he was fond of Brighton and that back in the day his parents used to live in Crawley and so he and his mates would stand on both sides of the A23 and thumb a lift and whichever car stopped first, would mean that they would either be heading up North to London or down South to Brighton.

Brian came back from Brussels and saw an advert in the Melody Maker music magazine and he auditioned and joined London SS. This is a band famed for virtually every member leaving the band and going on to have successful careers, which includes Mick Jones who went on to form The Clash and Tony James (no relation to Brian) who formed Generation X and then Sigue Sigue Sputnik.

Brian informed us that he had met a guy called Christopher Millar, when Millar had unsuccessfully auditioned to be the London SS’s drummer. Brian now had itchy feet and wanted to start his own band and so he contacted Millar with a view to starting up a new venture, Millar accepted and thus Rat Scabies was born and so was The Damned, with Brian on guitar and Rat on drums. They asked Sid Vicious and Dave Vanian along to audition to be the band’s vocalist, but only Vanian turned up, so that was sorted then! The famous foursome was cemented with Raymond Burns aka Captain Sensible who joined on bass.

The Damned were the very first UK punk rock band to release a single ‘New Rose’, which luckily enough is Brian’s son’s fave Damned track, especially as his dad wrote it. It hit the street on 22nd October 1976. Music wasn’t ever going to be the same again! Even Guns N’ Roses covered the track.

The Damned’s success is well documented and saw them as one of the biggest punk bands of all time. Their debut 1977 album ‘Damned Damned Damned’ is a classic and was produced by Nick Lowe and came out on Stiff Records on Brian’s 22nd birthday (18th February 1977). 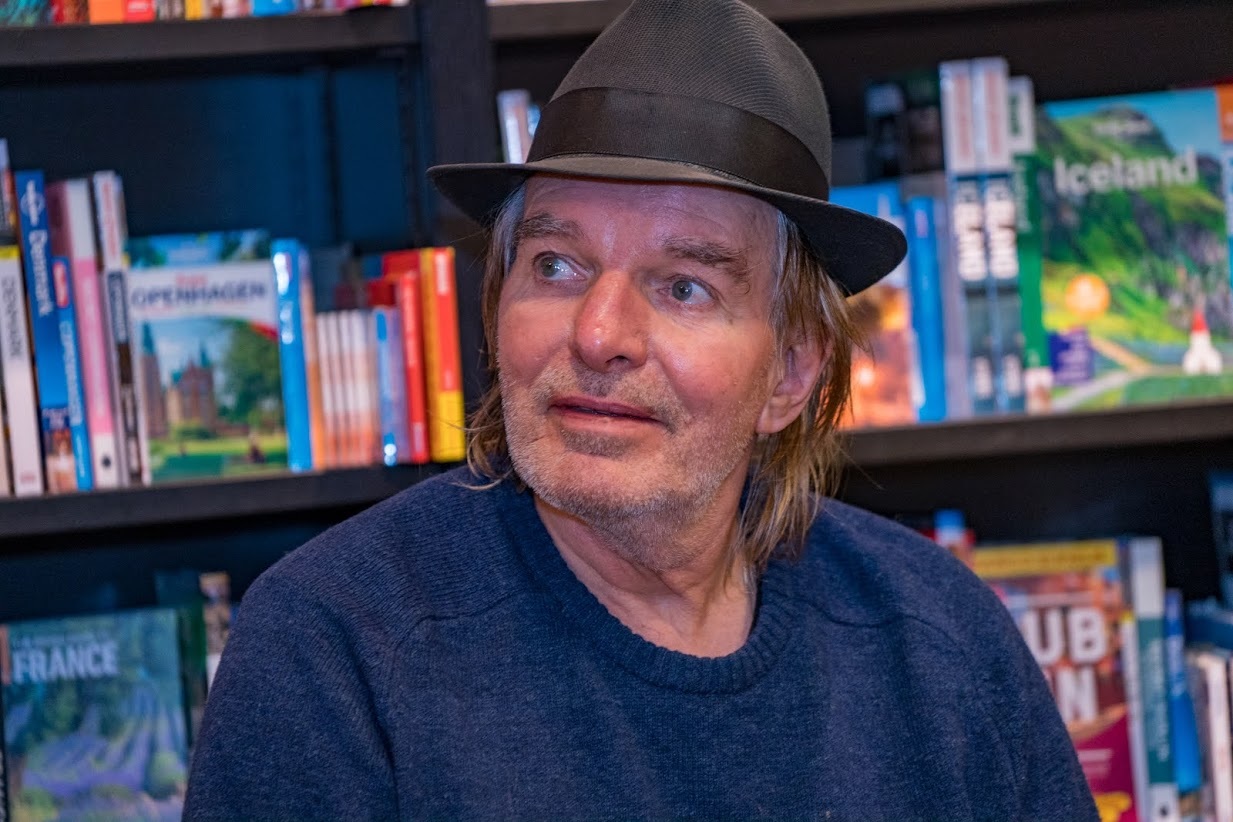 Brian said that the ‘difficult’ second album was released just a few months later, and Brian hadn’t really written enough material for it and asked the other guys in the band to chip in and help him. This was a rush job and ironically the album was titled ‘Music For Pleasure’. Brian was getting itchy feet again, and after only two years, he left the band in 1978 that he had formed.

Tanz Der Youth came along and then one day he had a message that he had missed a call from Iggy Pop (former frontman of The Stooges). He thought it was a windup until he actually spoke to his idol. Iggy invited Brian on play guitar on tour with him along with Glen Matlock from the Sex Pistols on bass. They went off and did an East Coast and West Coast tours and back again including Canada, so Brian told us.

Brian informed us that he had met an American guy called Stiv Bators in 1977, who had been the frontman of the rowdy Dead Boys, when The Damned had played at the famous CBGB Club in New York. Brian got in touch with Stiv in 1980 as Stiv had been invited across to pond with the view of becoming the lead singer of Sham 69, after the band had parted company with Jimmy Pursey. This pairing resulted in the formation of The Wanderers, but they were short lived.

Brian and Stiv started writing together and thus formed the supergroup – Lords Of The New Church, along with bassist Dave Tregunna (from Sham 69) and drummer Nick Turner from the Barracudas. I was fortunate to see them perform live on 31st May 1982 at Gateshead International Stadium along with The Police, U2, The Beat and Gang Of Four, and remains to this very day one of my very best concerts highlights. I informed Brian of this fact this evening, he was most pleased. They had got on the bill as their manager was none other than Miles Copeland, The Police’s drummer’s brother.

Brian informed us that he was living in Notting Hill Gate and one day suddenly thought that his sons buggy was the same height as all of the car exhaust pipes and so he had to get out of town and so they moved to France for five years, but thought it pertinent that they should return home just prior to his son Charlie starting school. They fancied Brighton and so Brian consulted with Brighton resident Captain Sensible, who sent him some details. The rest as they say is history.

Moving forward Brian James fans will be very interested to learn that he will be picking up ‘The Pioneer Award’ at this year’s ‘Vive Le Rock Awards 2020’ up in London at the O2 Shepherd’s Bush Empire on Wednesday 1st April. On the night there will also be a very special one-off reformation of 80’s goth rockers The Lords of The New Church, fronted by Finnish Hanoi Rocks legend Michael Monroe on vocals. Read our article HERE for further information. 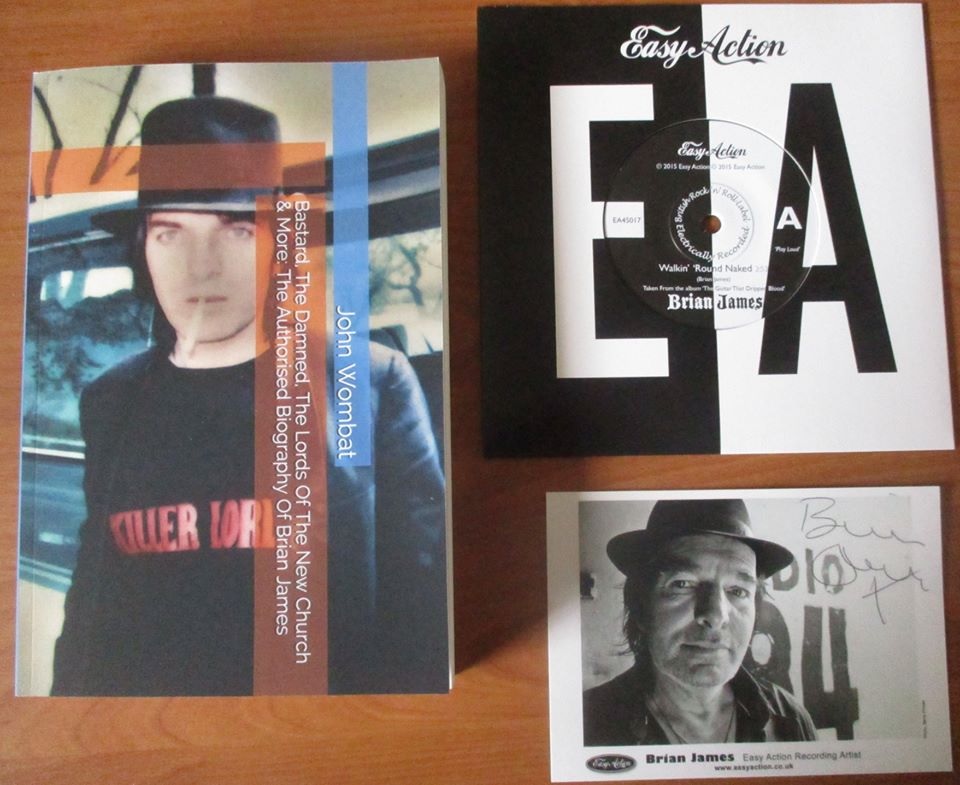 The book comes with 7″ single and signed photo