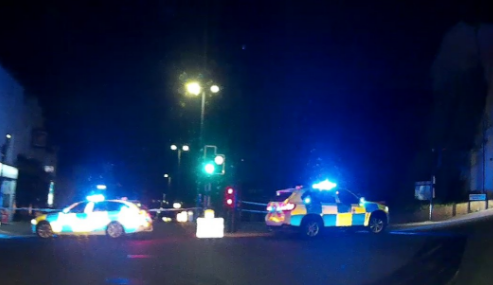 A police officer who hit a pedestrian who died was travelling at more than three times the speed limit before the crash, a hearing heard today.

PC Richard Harris is defending himself against a charge of gross misconduct in relation to the crash which killed David Ormersher, 79, on August 25, 2017.

A Sussex Police standards hearing was told he was driving to the beach where a woman had entered the water when the crash happened at 1am.

As he travelled along Eastern Road from Whitehawk to Kemp Town at speeds of up to 70mph, he would have heard messages over the radio saying the woman was out of the water, breathing and that an ambulance was en route.

Sussex Police counsel James Berry said: “This cases arises out of the tragic death of David Ormesher who was hit by a car driven by PC Richard Harris.

“From the moment PC Harris turned into Eastern Road he was travelling too fast and his excessively fast driving results in the crash which killed Mr Ormesher.”

He added: “While PC Harris was driving along Eastern Road he would have heard messages including one saying we have been trying to drag the lady out of the sea .. . we have put her in the recovery position and she’s breathing.”

In the afternoon, the panel heard from PC Samantha Cooper, who was the passenger in the car with PC Harris.

She told the panel she had been “disgusted” when he became the subject of a criminal investigation following the crash.

She said: “He should never have been under investigation. His driving was not dangerous. This unfortunate tragic incident was purely an accident.”

In a statement of hers made to the Independent Office for Police Conduct (IOPC) read to the panel, she said: “I know this man has died and his family has to live with that, but I think PC Harris has been treated appallingly, put under criminal investigation for something that I believe was an accident. It’s disgusting.”

She also said the journey along Eastern Road was so “plain-sailing” she could have made a cup of tea.

The allegations against PC Harris say he also narrowly avoided crashing into two vehicles, one turning into the Esso garage and one travelling in the opposite direction when he overtook a van and a bus.

The stretch of road he was driving along has a speed limit of just 20mph.

The hearing was told PC Harris contends Mr Ormesher had stopped while crossing the road but then started walking again into the path of the police car.

Sussex Police maintains Mr Ormesher walked continuously across the road, and that PC Harris should have seen him and performed an emergency brake.

The IOPC completed its investigation in August 2018 and referred it to the Crown Prosecution Service (CPS).

The panel, Chiew Yin Jones LQC, Chief Superintendent Jane Derrick and independent member Susannah Dengate, are due to sit for five days this week to hear evidence and make a decision.