A move to change the person in charge of reviewing “issues and challenges” with the council’s home to school transport service for children with special needs has angered parents and councillors.

Critics labelled the plan as like putting the fox in charge of the chickens and one parent said that the move would offend the laws of natural justice.

His defenders said that he was not involved in the decisions that led to no transport or inappropriate transport for dozens of Brighton and Hove’s most vulnerable children last September.

The proposed change comes because the Green Party took over running the council last month after it became the largest party when two Labour councillors resigned.

But Councillor Allcock was the politician in charge of Brighton and Hove City Council’s home to school transport service at the height of its troubles.

He was elected after the key decisions had been made but has been accused of trying to scrap the panel when many felt that it still had vital work to do.

Green and Conservative councillors outvoted Labour to keep the panel running for a further six months.

But, given that an independent review urged the council to win back parents’ confidence, one parent told Brighton and Hove News that the proposed appointment was “insensitive”.

A number of parents and councillors want Councillor Clare to continue chairing the panel even though the task would usually fall to an opposition member.

Those understood to support Councillor Clare continuing in the role include Conservative councillors Mary Mears and Lee Wares.

Councillor Clare now chairs the council’s Children, Young People and Skills Committee and is the new deputy leader of the council but she was in opposition when appointed to chair the panel.

The row is likely to be settled at a “virtual” meeting of the full council tomorrow (Thursday 13 August). 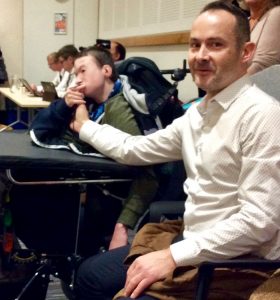 Rob Arbery and his son Aidan

Rob Arbery, chair of governors at Hill Park special school, was one of a group of parents who called on the council to set up a cross-party panel to look into the problems with the service.

Mr Arbery said: “It does beggar belief that someone who did not want the scrutiny panel and tried to finish it should be chair.

“It’s a shame Councillor Clare cannot continue as chair. We should put party politics aside and either appoint Councillor Mears or Councillor Wares as chair as they have shown leadership throughout and are trusted by the families that were affected.”

The panel first met in public in January as an independent review was also carried out into why children were left without transport and lost hours of lesson time.

The schools worst affected were Downs View School, in Woodingdean, and Hill Park School, in Portslade.

Both Councillor Wares and Councillor Mears warned against the cost-cutting system which was designed to save £300,000 from a £2.4 million annual budget.

But rather than saving money, the new system ended up pushing the cost of the service about £1 million over budget.

The consultants behind changes to the service, Edge Public Solutions, have since walked away with £180,000 having persuaded officials to ditch a conventional contract framework and use a controversial “dynamic purchasing system”.

The two Conservatives said that they were “outraged” at the Labour’s move to install Councillor Allcock as the chair of the panel.

Councillor Mears said: “Labour’s arrogance is breath-taking that, having just lost control of the council after 15 months, they now want to seize control of the panel that was set up specifically to look into the issues they actually caused.”

She said that just a few months ago Councillor Allcock did not even support the panel continuing its work.

Councillor Mears said that the panel’s work was vital to help restore the trust of parents and carers in the home to school transport service.

All parties previously agreed that the Children, Young People and Skills Committee or the panel members themselves would elect the chair – not the full council.

Councillor Wares said: “For somebody who recently vigorously fought to shut the panel down, to then want to chair it, it beggar’s belief.”

Labour said: “The facts are that we faced up to the problems with the home to school transport service head on, Councillor Allcock apologised unreservedly to those who rely on the service and pledged to get to the bottom of the issues.

“We commissioned an independent review to learn crucial lessons and we turned things around, getting the service back on track and rebuilding trust with parents and carers.

“We are pleased that the service has completely changed the way it works since that time.

“The service has gone a long way towards regaining the trust and confidence of the Parent Carers’ Council (PaCC), of our schools and our transport operators.

“Councillor Allcock is very grateful to PaCC for the continued challenge to improve our service and their support in helping us to do so.

“He is also grateful for our transport operators for working closely with the service to support improvement and for their flexibility and dedication to our children and young people over the pandemic period.

“Not everything is perfect yet and much work is ongoing. However, an action plan is rapidly addressing every recommendation in the Local Government Association independent review report published this March.

“It is essential that all political parties work together co-operatively in the best interests of SEND (special educational needs and disabilities) children, parents and carers – and that’s how we are approaching the Home to School Transport Policy Panel.”

The special council meeting is scheduled to start at 4.30pm tomorrow (Thursday 13 August) and is due to be webcast on the council’s website.