Residents who care passionately about protecting the last remaining green spaces adjoining the South Downs have been given a final chance to stand up for two precious sites in Coldean.

The green space off Coldean Lane is currently subject to a two-month consultation after being listed in the proposed 10-year development plan for the city (City Plan Part Two).

Our three groups – the Coldean Residents Association, Stanmer Preservation Society and Coldean Women’s Group – want to grasp this opportunity and are making a final attempt to convince Brighton and Hove City Council that the land should not be built on.

We want the council to understand that a city needs its green spaces as much as it needs its bustling urban areas.

This consultation is a chance, in our eyes, for the council to right the wrongs of the planning decision made in July last year to earmark the land for high-rise tower blocks.

In July last year, planning permission was granted for a joint venture housing development of 242 dwellings in six and seven-storey blocks on a field off Coldean Lane, with an adjoining site behind Varley Park Halls of Residence also earmarked for future development.

The partners in the joint venture are Brighton and Hove City Council and Hyde Housing.

Multiple objections had been lodged to the plans during the public consultation phase, including one from the South Downs National Park, which stated that it would be “an overdevelopment of inappropriate scale and density for this hillside urban fringe location within the setting of the (national park).

The national park authority added: “It would also appear to conflict with policy SA4 of the City Plan Part One – and with the proposed designation of the site as a Local Nature Reserve.”

Residents of Coldean had many and various reasons for objecting. Some were primarily concerned about the effect on wildlife – there were badger setts on the site in places earmarked in the plans for sewers.

Others were concerned about the fact that it would be built on part of the chalk aquifer that supplies much of Brighton’s drinking water.

Some had concerns about the dangerous position of the site, with the sheer drop to the Brighton Bypass at one end and busy Coldean Lane – already an accident blackspot – at the other.

And others were worried about the effect that such a large-scale developent would have on Coldean’s infrastructure, including parking space.

There will only be parking for half the number of proposed dwellings on the site itself.

We had initially been given to believe that this would be a small, low-rise development, in keeping with the Coldean estate and able to blend in with the landscape.

We were horrified when plans for almost twice the number of dwellings we’d been anticipating, encased in high-rise blocks and with minimal parking provision, were unveiled.

We voiced our objections clearly and loudly but, with only minimal alteration to the plans, the joint venture was given the go-ahead.

There have been further objections from Stanmer residents – who, incredibly, received no official notification of the development proposals at all and only became aware of them after planning permission had been granted.

The site was apparently described to the council’s Planning Committee as “formerly part of the Stanmer Estate”.

It is in fact STILL part of the Stanmer Estate, despite being on the other side of the Brighton Bypass. The Stanmer boundary wall is still visible along Coldean Lane.

The land was originally designated for agricultural purposes and Stanmer Preservation Society has been unable to locate any document formally releasing it for development, despite an extensive search. 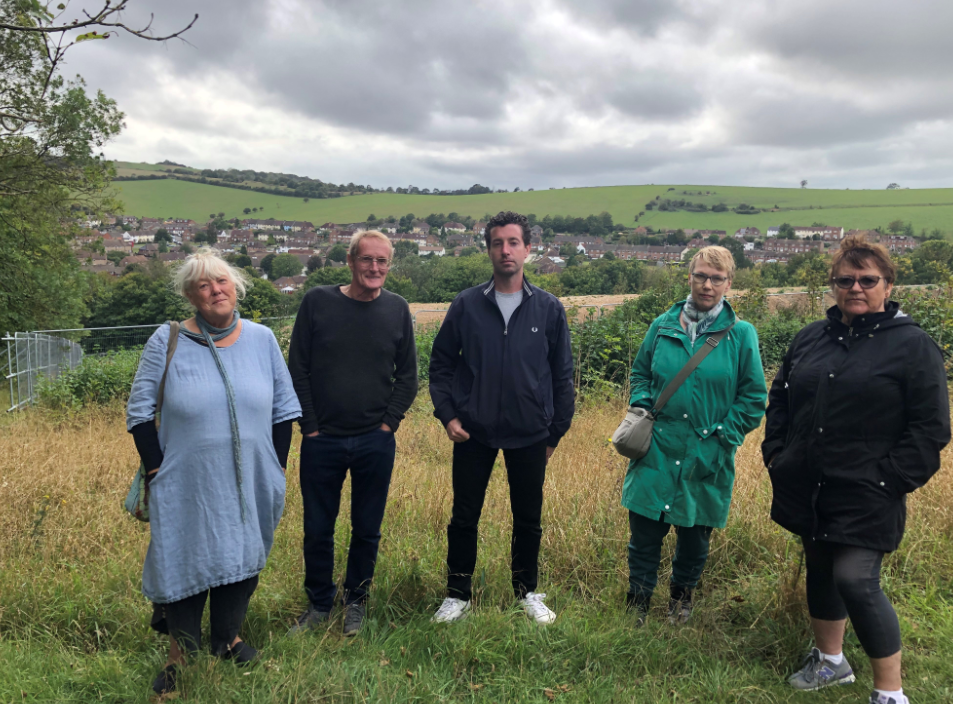 The Brighton and Hove Local Wildlife Sites Review of 2017 describes the land at Coldean Lane as “ancient woodland, ex-arable land and semi-improved chalk grassland (which) supports a number of protected and notable species” and confirms that it is a Local Wildlife Site.

The city’s Urban Characterisation Study of 2009 describes the land thus: “The steep incline of the valley sides … has rendered it undevelopable.”

It seems incredible that the land thus described is now considered suitable for a high-rise development – and the council’s Planning Department has declared it to be so, saying that planning has now been ratified and that there is nothing we can do.

With the City Plan consultation, we have been given one last chance to give these sites a reprieve.

We are asking for the council to think again, consider the evidence that was ignored when planning permission was given and remove the sites from the City Plan Part Two, to allow nature to exist on the edge of our city.

To right the wrongs of last year’s planning decision and save the space.

We encourage Brighton and Hove residents to join us in this stand and add their signature to the petition to remove the Coldean sites from City Plan Part Two so that we can bring the matter before council for renewed scrutiny in October.